It took just 60 seconds for Meghan Markle to forever alter the trajectory of brides.

Ms. Markle, the Duchess of Sussex, entered her wedding ceremony solo in 2018, walking halfway down the St. George Chapel aisle before joining Prince Charles. Then, the prince stepped aside and the duchess completed her journey to Prince Harry, whom she married.

“I was inspired by Meghan Markle,” said April Brown, a marriage and family therapist in Miami, who married in 2019 in the English countryside. “I felt it was empowering and liberating to walk by myself, and I wasn’t also keen on the archaic ideas of your father giving you away.”

It’s been a slow yet steady march toward this evolution. 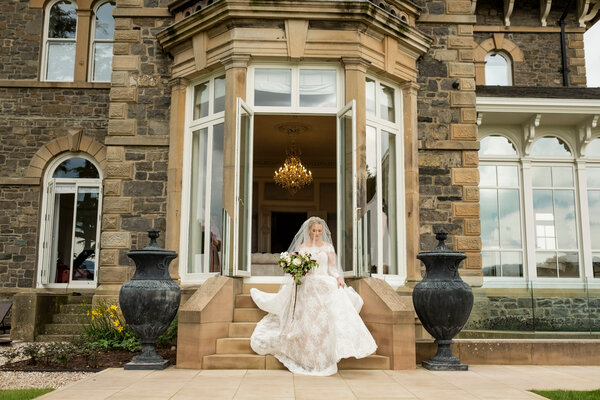 Brides, traded by their fathers for a dowry, were once formally exchanged at the altar. And yet fathers have continued to walk their daughters down the aisle as an ode to the tradition.

In 2013, 82 percent of people surveyed by YouGov, a British market research and data analytics firm, said the father of the bride should give his daughter away; three years later, that number dropped to 61 percent. (There haven’t been any major surveys done following this.)

When Lauren Nolan, an independent consultant in New York, walked down the aisle for her small pandemic-era wedding in September on the Long Island City waterfront at the Luminescence Art Installation in Hunters Point Park, she did it alone.

“I feel strongly that the longstanding tradition of having one’s father or other prominent male figure walk a woman down the aisle is a tradition worth tossing,” Ms. Nolan said. “This tradition always felt frankly gross to me, deeply rooted in patriarchy, and the notion that a woman must belong to a man.”

Instead, Ms. Nolan said, when she met her fiancé at the altar, she was making a joint decision to combine their lives, rather than participating in a handoff between men.

[Sign up for Love Letter and always get the latest in Modern Love, weddings, and relationships in the news by email.]

Marina Gershon, a 36-year-old puppeteer who got married in 2017 on a farm in Freeville, N.Y., had similar sentiments before her wedding. She was looking for a ceremony that truly represented her and her fiancé, so Lily Gershon of LilyPad Puppet Theatre and the bride’s sister, was their giant puppet officiant. They also allowed for costume-optional guest attire and food was served from their farm. They also squashed any traditions they considered to be antiquated.

“A tradition that is based on the father’s ownership of the daughter for financial liability and other similar ideals seems as appropriate as giving my partner a musk ox for a dowry,” Ms. Gershon said. “The idea of ownership, in general, brings up many questions for us, and even though it is romantic to say things that are written on Valentine Day’s candies like ‘Be mine,’ the idea of saying that to someone I love leaves a bad taste in my mouth.”

Ms. Gershon’s friend Marietta Synodis walked her down the aisle in memory of Ms. Synodis’s father who died unexpectedly. “We thought it was a way that Marietta could not only walk down the aisle with me, but also honor the memory of her father, as this would be his role in her wedding if she was to have one,” she said. “Even though I do not follow conventional traditions, I do respect other people who choose to ride those waves if that is what feels right to them.”

The walking down the aisle solo trend comes at a time when couples are stepping away from traditional wedding frameworks in all areas of the celebration, from the color of the gown to the increase in symbolic rites (versus church or civil ones), said Valentina Ring, the founder of the Stars Inside, a wedding planning company based in London. Couples are gaining more control and freedom over the structure and content of the ceremony itself, Ms. Ring said.

“A lot of brides love the idea of honoring their independence and strength by walking down the aisle on their own, or walking down with their fiancé, symbolizing the two of them heading toward their future as equals,” Ms. Ring said.

That’s why Leigh Luerman, a software engineer in Louisville, strolled down the aisle side-by-side with her fiancé during their 2018 wedding at the Buffalo Trace Distillery in Frankfort, Ky.

“Part of it was distaste with the concept of being given away, but also, my then-fiance and I already had a life together,” Ms. Luerman said. “We wanted to approach this together.”

During her ceremony in Gloucester, Mass., Gabi Toth didn’t even consider the idea of walking down the aisle without her fiancé. It was their wedding, they didn’t have strong opinions about popular traditions and both sets of parents seemed to be happy to be left out of the ceremony, Ms. Toth, a librarian, said.

One bonus of walking down the aisle with your fiancé? Truly sharing that moment with the person you’re about to marry, said Rocío Catalina Mora, a freelance musician in Vermont.

“Getting to walk each other down the aisle was the most magical feeling in the world,” Ms. Mora said. “I still get shivers down my spine when I think about it. It wasn’t a long walk, but the conversation was literally: ‘I love you, let’s do this.’ Walk a few paces, ‘Oh my god, they’re all here for us,’” Ms. Mora said.

And while many religions dictate the wedding processional, which tends to involve one or both parents walking the bride to her groom — the Religious Society of Friends (Quakers) have a totally different tradition.

“The bride is not a possession to be given away to her new spouse: walking down the aisle together is the traditional way, and the idea of being given away seemed foreign and contrived,” Ms. Pearce said. “We asked the pastor from my Friends meeting to preside over the order of service, but he did not marry us — we married one another.”

Still, many couples want to recognize the importance of their families (and their fathers) during their wedding ceremonies — with or without the aisle walk.

Rebecca Sloan, a 34-year-old small business owner in Ontario, was married outside on a small Ontario blueberry farm in 2018. To set the tone for their marriage and future together as equals, Ms. Sloan and her fiancé decided to walk into their ceremony and down the aisle together.

“Despite this, we did still want to honor our families and friends, and involve them in the ceremony in a way that would show the important roles they have in our lives,” Ms. Sloan said.

They did this through a handfasting, which is a Celtic tradition where the couple join their hands with ribbons to symbolize the binding of two lives. They had four groups of family members and friends, and each helped tie a ribbon around their hands while the symbolism of the ribbon was read.

“In this way, we were able to design a ceremony which really reflected us as a couple and our values,” Ms. Sloan said.