A WOMAN is seeking advice after facing a backlash from her husband over her plans to name their unborn son Gaylord.

She claims the name is traditional in her family – with both her dad and granddad sharing the moniker – and doesn’t want to upset her relatives by not using the name. 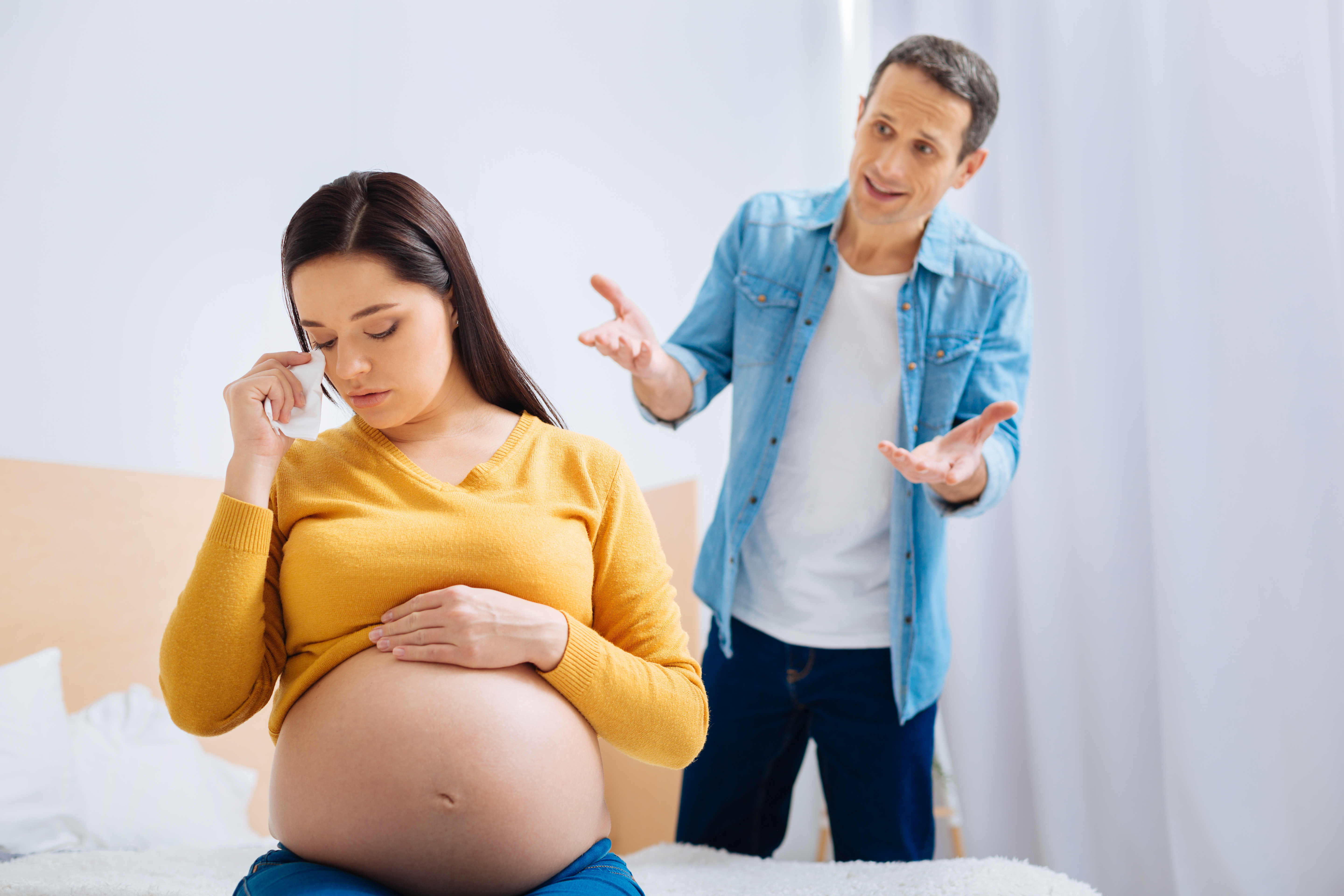 The 23-year-old explained her son is the first grandchild on her side of the family, so they expect her to continue the family name.

Writing on Reddit, she said: “In my family, our genealogy is extremely important. The firstborn son since the 1800's has been given this name.”

Despite acknowledging the name is “stigmatised”, she still planned on using Gaylord but abbreviating it to ‘Gail’.

She added: “I get it, trust me, I know most people hate it.

“That is why I've been able to discuss with my parents and grandparents that he will go by Gail in daily life so that he doesn't have to deal with bullies.

“They really didn't like the idea, but I wore them down and they have agreed and don't seem too offended by this.

“They see the backlash over the name today as a fad that will eventually disappear, and I agree seeing how accepting each generation tends to become.

“When society stops being so immature about it, he can start using the full name.”

She claims her husband was initially on board with the idea, but when she discussed it with him again he told her he thought “she was kidding”.

I get told I'm a 'fraud’ because I do my makeup so well, I don't care I love it

He then told his parents, who not only phoned her up but also called the side of the family.

The mum-to-be said: “I now have his whole family hounding me and overreacting, telling me it would be abusive even when we'd just be calling him Gail.

“My mother told me my MIL has called her to scream at her over the phone.

“My in-laws are telling me that even Gail isn't an acceptable boy's name, and that I need to ‘get with the times’ and choose something more appropriate.

“They gave me a list of approved names like I'm a child, which is incredibly offensive to me.

“Not to mention they were trendy names that would never stand the test of time.”

When society stops being so immature about it, he can start using the full name

She thought her husband wouldn’t have such a big problem with the name if it wasn’t for “his family sticking their nose where it doesn't belong”.

She now felt trapped between her family and his, raging: “His family doesn't have any naming traditions, so it should fall to my family that does.

“How could I be expected to break a centuries old family tradition? Are we really going to let immature homophobia dictate what we can and can't do?

“I can't get past this, and neither can my in-laws.”

Her post has racked up thousands of comments, as multiple waded into the debate with compromises and alternatives. 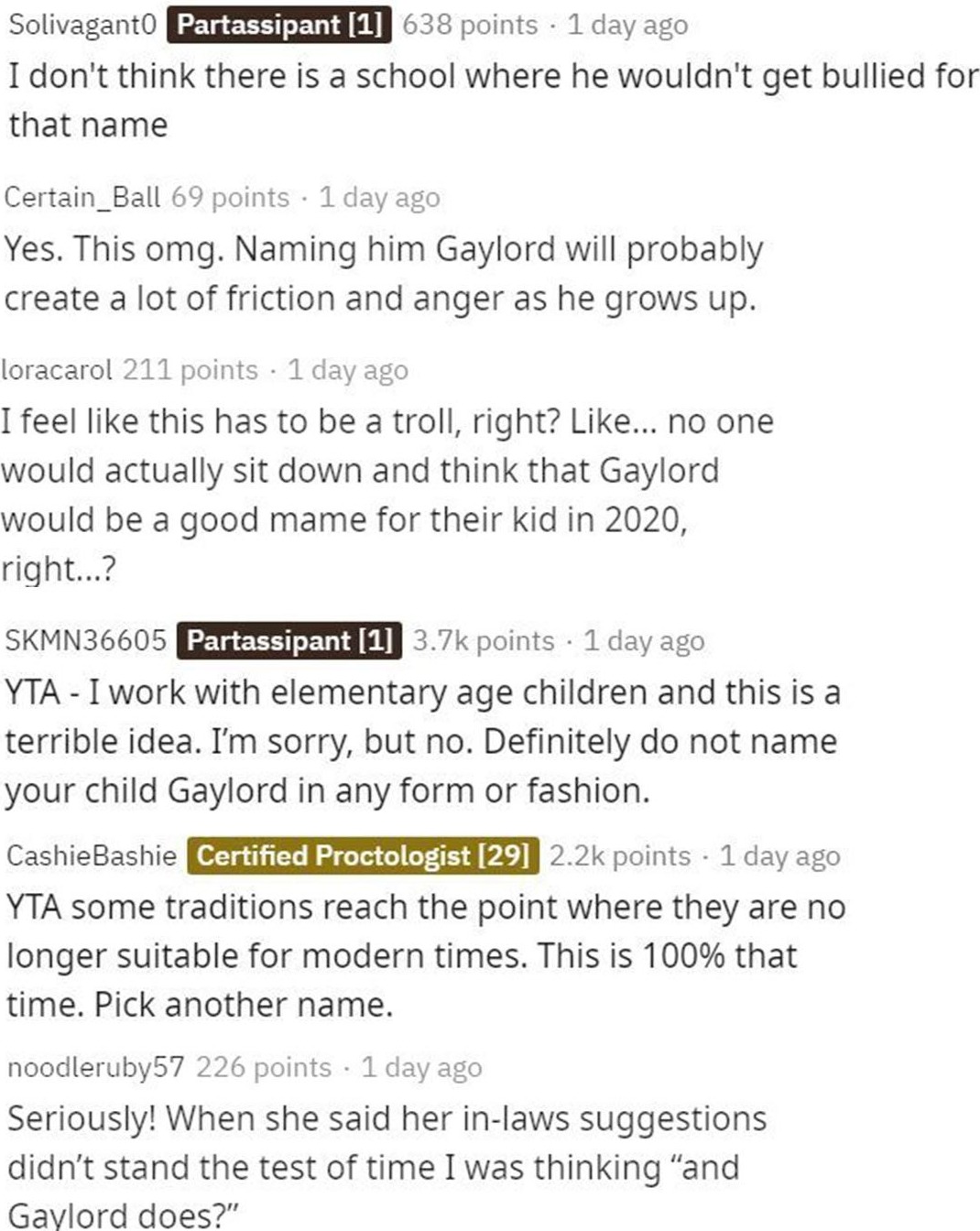 But the woman was adamant the name should be used, adding: “His classmates would never have to know the full name because that's something you can discuss with the principals and teachers to not share.”

Others suggested the spelling of Gale instead, while another said changing the spelling to Guillard, and going by Guy for short, could be a viable alternative.

That didn’t go down well with the woman’s family, as she later added: “I just got off the phone with my family. They were offended by Guillard and Guy because they're too different, so that's off the table.”

But she seemed to have worked out a suitable compromise – which she was yet to run by her husband.

She said: “We managed to work out that Gale Gaylord would be a reasonable compromise, with Gale being the complete first name, and Gaylord being the middle name.

“My husband can then add a second middle name after Gaylord if he wants.

“So I'm going to wait til my husband calms down and offer this as a solution. I'm thinking that with the more masculine spelling, my in-laws might come around to Gale.

“I'll also offer my husband free pick for our second child's name, and will accept whatever he chooses.”

Despite the possible alternatives, hundreds of people agreed with her in-laws, that the name would most likely see her son bullied.

Commenting online, one person said: “I don't think there is a school where he wouldn't get bullied for that name.”

Another wrote: “I work with elementary age children and this is a terrible idea. I’m sorry, but no. Definitely do not name your child Gaylord in any form or fashion.”

A third thought: “I feel like this has to be a troll, right? Like… no one would actually sit down and think that Gaylord would be a good mame for their kid in 2020, right…?”

Another person added: “Some traditions reach the point where they are no longer suitable for modern times. This is 100 per cent that time. Pick another name.”

In other baby news, this mum has been hit with accusations of choosing a boy's name for her daughter, but doesn't care about trolls.

This woman jumped into a lake to get out of her friends' gender reveal pictures.

And one mum has shared a simple but clever trick to get dolls' hair smoothy and glossy again.