To take fashion's pulse, Karen Webster doesn't just peruse the boutiques or catwalks of Paris or Milan, or stroll through Melbourne's CBD. She gets her intel from her mother, who volunteers at a Salvos store in the city's outer east. And what she hears is causing her alarm.

Blame the Marie Kondo effect or the scourge of fast fashion, but the volume of cheap clothing reaching the charity sector that's unable to be resold is staggering. And Webster, who has morphed from fashion designer to educator via festival administrator, says change is urgently needed. 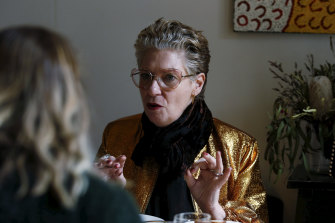 Karen Webster: ‘There is still this perception that design is frivolous.’Credit:Darrian Traynor

"I hear from girlfriends of mine who are the most intelligent people I know, who have high-level executive positions, but aren't in creative industries, that clothing is so expensive," she says. "Actually it's not, if you knew what goes into creating that piece.  If you talk people through what our grandparents knew, about creating something and mending it. Now you can go off to one of the big chains, buy a coat every season, and it completely devalues when one of our designers does something and wants to charge $500."

Webster believes the industry – and consumers – should be pushing harder for retailers to take responsibility at the end of a garment's life, not just at the start.

"In my dream world, retailers would have to take product back [when it's no longer wearable]," she says. "It's the total cycle. And designers have to think about how it can be repurposed and recycled."

It was inevitable during our lunch that Webster would bring up textile circularity, which many people in fashion agree is the greatest challenge facing the industry. As principal and dean of the Melbourne branch of international private design college LCI, a position Webster took up mid last year, it's her job to ensure the designers of the future are part of the solution.

LCI opened in Melbourne about 18 months ago with its headquarters in Collingwood. Webster says it differs from other tertiary design courses in that it allows students to "taste" multiple disciplines rather than studying in a "silo". 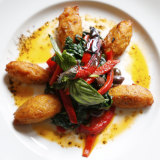 "We want to be the disruptors," she says. "But I actually prefer the word progressive because it's forward thinking and has a positive tone, where disruptors is a bit about the negatives."

A few months shy of 60, there is a youthful energy in Webster's voice when she discusses her professional renewal. It's fitting, then, that we meet at Charcoal Lane, a social enterprise restaurant in Fitzroy that offers hospitality training and work opportunities for young Indigenous people.

"What I love about [the restaurant] is it supports young people," she says as we peruse the menu. "And it's Indigenous – how many restaurants do we have that celebrate our Indigenous culture?"

Webster says the pumpkin and wattle seed gnocchi is her "favourite comfort food" but today she's flirting with the idea of the goldband snapper special.

With LCI's 23 campuses globally, Webster has already welcomed "a constant flow of people from overseas. You have to take them somewhere special. We are so spoilt for choice in Melbourne but I always try to bring them here," she says.

Settling on her beloved gnocchi, I order the snapper. And despite being a certain hour on a Friday, we stick to mineral water, Webster having just recovered from a bout of flu.

Webster says in five years running the Melbourne Fashion Festival (from 2005-2010), she enforced strict rules for herself around drinking. "I was often on the go from six in the morning until one in the morning [the next day] and every event had alcohol – so always one on, one off. "

Still, Webster is at pains to stress that working in fashion isn't, for the most part, about bubbly and air-kissing. It's a crusade she has been on since her school days. After topping the state in economics, Webster was strong-armed into studying politics and economics at university instead of pursuing her love of fashion. 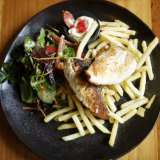 "The school intervened and came to my house and talked to my parents because I had said I wanted to study fashion design," she recalls. "They said, absolutely you can't do that, it takes no brains [to work in fashion]."

While at university Webster, who began sewing basic clothes on her grandmother's treadle machine from the age of four, found a job in a Carlton boutique; her earliest clients were the wives of AFL footballers – the Bec Judds and Jessie Murphys of the day.

"To this day I use that experience [from school] as there is still this perception that design is frivolous, that fashion doesn't take a high level of intelligence but I realise, according to statistics, one in six people globally are employed in fashion … everyone wears clothes and yet we still demean an industry that's [so powerful]."

After she quit her economics and politics studies, Webster studied fashion at RMIT and went on to launch a label called Detente that "had some success". In the 1990s, while working freelance for many brands (she was part of the team behind the popular youth label Room Two Clothing), RMIT invited Webster to give a guest lecture, which led to a workshop and then part-time teaching. Within two years she was running the fashion program.

"What I realised early on is that I wanted to make a difference," she says. "Design can make a difference to people's lives and how they feel … In essence, when I started teaching, inspiring students had a far more powerful impact [than designing]. I felt I had found my place. That's why I am back there now … I am back with my tribe. I bounce out of bed in the mornings to go to work."

Still, making yet another career pivot at age 59 (for the past two years, Webster worked for a design house that, among other things, made business- and first-class amenity kits for airlines) did not come without a period of self-doubt. "We live in a culture that's ageist, especially with women, and in fashion. This idea that it's youth orientated. My 22-year-old daughter came over and said, 'I need some black wide-legged trousers' … I'm hitting 60 but my 22-year-old wants to wear my pieces. OK, she's going to wear them with a crop top but age is not a determinant of what people wear."

As both a mother of three, including 18-year-old twins, and principal of Gen Z, Webster is confident the future is in safe hands. "It's this generation who says let's do things differently," she says. "Our students want to set up clothing swaps, they want to set up events where people can bring their clothes in and they will show them how to restyle them. 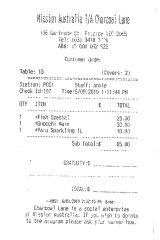 "There's a groundswell that's happening that actually really excites me about this next generation. The world is going to be in good hands because they want the world to be a better place. ”

But the revolution is not without its challenges. Webster says not enough students are graduating from design school with the necessary practical experience to survive in business – and then there's the culture of copying that she says is endemic in Australian fashion.

"We're at a crossroads with fashion design in Australia," she says. "A lot of the big chains, including internationally, are getting the same information and creating similar product. So it becomes a race to the bottom. Who can get the product in store first, or cheapest – that becomes the quest rather than the most creative. We have brilliant designers in Australia but if the bulk of the industry has this culture of copying we're not going to shift."

Her mission is twofold: creating designers across a range of disciplines who are employable, and imbuing in them a sense of social and environmental responsibility.

She says it's also vital that consumers support local design if it's going to have a viable future. "We are spoilt for high-quality product that's local that we can't get anywhere else in the world," she says. "We should be standing on the rooftops and shouting that this is fabulous.

"This world has changed absolutely and fundamentally, and fashion has to change with it. If we buy less and better and local, then in two years know we can do something with that piece to reinvigorate it, then maybe we can change the culture."

Wearing her economics hat, Webster says in our grandparents' era people spent about 20 per cent of household income on clothing, compared to 3 per cent today.

"We're spending this phenomenally small amount [on clothing] – I call it the bombardment of stuff versus the creation of magic," she says. "Stop bombarding with stuff, let's make things that make a difference in people's lives."