In July 2015, after the United States women’s national soccer team had won its third World Cup final, securing its place as the dominant women’s international soccer team; after its winning game became the most-watched soccer game in United States history, with an average of 25.4 million viewers (more than the N.B.A. finals, more than any men’s soccer game); after the team returned home to a ticker-tape parade in Manhattan, the first time a woman’s team had been so honored — after all that, the members of the team still had the feeling.

“We weren’t able to capitalize on the moment,” Christen Press, a forward, said recently.

“Everyone around us was — TV, sponsors — but we weren’t compensated or treated like what we were: the absolute best soccer players in the world.” So, Ms. Press said, “we decided it was time to change the paradigm.”

The “we” she was referring to included her teammates Megan Rapinoe, another forward and captain; Tobin Heath, also a forward; and her former teammate Meghan Klingenberg.

There was less than a week to go before the three current players would fly to London to begin final preparations to defend their title in the 2019 Women’s World Cup, which begins on Friday in France. But before they got on the plane, they were sitting around a conference table in a loft in Lower Manhattan, going on the offensive with something else.

They had decided they were done leaving their brands, and the potential of what their brands could become, in the hands of the corporate world. So they had formed a new company, re-inc (purposefully lowercase, named after the idea of reinventing the incorporated), and this week they were unveiling their first product: a T-shirt with the words “Liberté, égalité, defendez” on the front.

“It’s really a mission statement,” Ms. Press said. And it’s the beginning of what will be a series of drops in the spirit of Fenty or Supreme that they see ultimately as a full gender-neutral line encompassing street wear, heath and wellness, and technology.

“We wanted to start in fashion, because it’s male dominated, and street wear is the worst of it,” Ms. Press said. “It’s made mostly by men, for men, and women have to adapt. It’s ripe for disruption.”

The aim of the line, which is sold through a website, newsletter and social media channels — together the women have more than 1.75 million followers — is to wake up the world to the power of these particular athletes, not just as vehicles for other people’s marketing visions, but also as powers in their own right.

As such, it is also what they believe is one of the last fronts in the fight for the equality and recognition that the team has been waging since the late 1990s, a fight that culminated in a gender discrimination lawsuit filed by 28 players earlier this year against the United States Soccer Federation. And it is one of a number of such initiatives being explored by different members of the team.

Also this week, Alex Morgan, Kelley O’Hara and Allie Long introduced a new website featuring a T-shirt of their own design: “USA vs. Everybody.” And not long after, the Players Association (effectively the union of the women’s soccer team), unveiled a new brand on its web site: OOSA, named for the team chant and conceived to represent the players, on and off the field; products will follow.

“Our members are brilliant, enterprising women who are exploring ways to monetize their individual brands beyond their endorsement deals, that hopefully will create opportunities beyond their playing days,” said Becca Roux, the executive director of the Players Association.

After all, being an elite athlete is not just about what happens on the pitch or in the arena. It’s about the way that success is parlayed into multiplatform businesses.

“It’s about our fight for fair value in a different way,” said Ms. Press, before passing to Ms. Rapinoe.

“There’s this box of ‘female athlete,’” Ms. Rapinoe said, one that is favored by many of the large brands they work with — Women’s World Cup sponsors like Coke and Nike. And it is a box, they all agreed, defined by the idea of “girl next door” — or, in the case of Ms. Rapinoe, who has been an out athlete for about 10 years, “the equality person next door.” Over to Ms. Heath.

“We’re always seen through other people’s lenses,” she said. The three women looked at one another. Not anymore.

Breaking Out of the Brand Box

Most of the inequities of United States soccer, where the women’s team has been notably more successful than the men’s and has become an beacon for women’s rights in sports for more than two decades, are fairly well known: the fight to play on grass as opposed to artificial turf; the continuing dispute over pay.

But even in that context, the lack of corporate recognition of the broad audience appeal of the female soccer star is surprising.

It wasn’t until 2015, for example, that Nike, the brand that outfits 14 of the 24 national teams playing this month, started making women’s jerseys in men’s sizes so that male fans could support their team and favorite players.

That was also the first year Electronic Arts, the company behind the FIFA video game, included women’s teams and players in its virtual soccer world.

Nike did not design uniforms for the women’s teams until this year. Previously it had simply made derivations of the men’s uniforms for women. It wasn’t until 2017 that Ashlyn Harris, another member of the United States team, became the first female global ambassador for the soccer brand Umbro.

“In the past,” said Mike Principe, the chief executive of GSE Worldwide, a sports marketing and management company, “female athletes were seen as most marketable when they could be pitched as sex symbols, and that is only now beginning to change.”

Still, it is not a subject most sports agents or managers want to discuss, even in the context of evolving attitudes. When contacted, most asked to speak off the record or on background, and picked their words carefully, tiptoeing around the idea. The athletes were not nearly as circumspect. 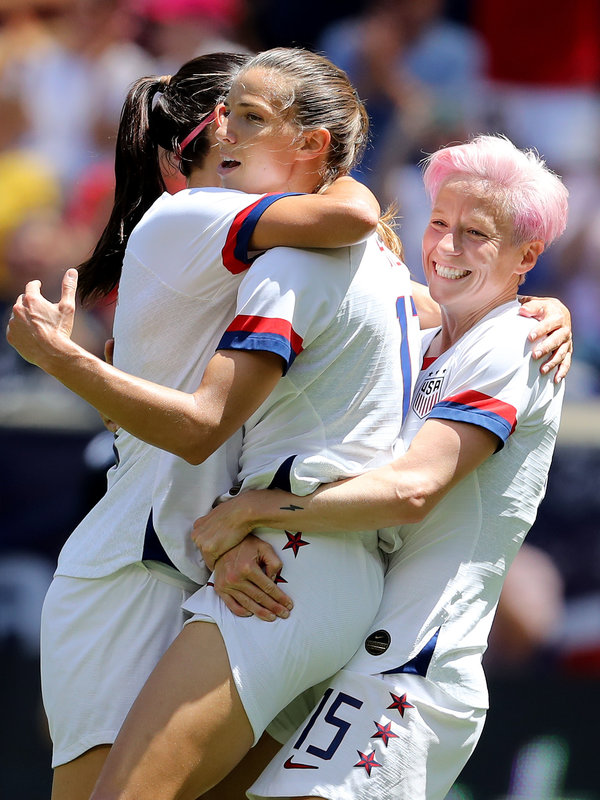 “I had always felt as if I was put in a box with my partnerships,” said Ms. Harris, who has been a fixture on the national scene for more than a decade. “They’d cover up my tattoos during photo shoots. It started to make me feel I wasn’t good enough, that I wasn’t being valued for who I was or what I brought to the table.”

Finally, after the 2015 World Cup victory, she said, she told Wasserman, her sports agency, not to bring her any brand proposals that “didn’t align with who I was.”

“I realized I was never going to be the tall, blond skinny girl from the magazine cover, but I was very good at being me,” she said.

Being herself was certainly working on social media, where Ms. Harris had begun making the occasional T-shirt, which she would promote on Twitter and Instagram, and which, she said, would sell out “in days.”

As a result, creative input became part of her deal with Umbro, regarding both the products she endorsed and wore and the way her image was portrayed. This fall the first Umbro by Ashlyn Harris collection will be released.

“They gave me a seat at the table,” she said, “and I’ve been sitting there ever since.”

But what if you want to set your own place?

Instead of Fighting for Something, Own It

The idea for re-inc was first broached by Ms. Klingenberg in 2015, after the last World Cup victory. She had been talking to Steve Nelson, an entrepreneur and co-founder of the 3-D manufacturing company Carbon, Inc. in Silicon Valley, and a mentor of sorts from her days playing at the University of North Carolina Chapel Hill.

As he remembered, he told her: “You’ve been fighting and trying to get paid more, but instead of fighting for something, why not own it? Equity is more valuable than a raise.”

This is not exactly a new idea in the tech world, though it is one that is starting to gain currency in the sports world, where traditionally the big brands have dominated, but where social media has transformed the ability of athletes to connect directly with their (often immensely dedicated) fan base.

There is a trend, said Marc Beckman, the founder of DMA United, an advertising agency that represents brands and individuals like Russell Westbrook in taking ownership of their own commercial future and profit margins.

Certainly, this has not escaped Alex Morgan (5.8 million followers), who, when queried by a fan about “USA vs. Everybody” on her Instagram page, noted, “Our idea, our execution, our brand.”

“If you think about other athletes such as LeBron James, Serena Williams, even Maria Sharapova, it’s the pay and power that they derive from their professional identity that qualifies them for whatever comes after, whether it’s fashion or film or something else,” Ms. Rapinoe said.

Building a brand is part of that, and on social media especially, being able to be “authentically yourself,” she said, is key. The best way to do that is to do it yourself.

In October, with Mr. Nelson and Rocky Collis, a lawyer and the outside counsel for the United States women’s player’s association on board, re-inc was formed and went into what Mr. Nelson calls “stealth mode.”

Ms. Press is the chief executive; Ms. Klingenberg, the president; Ms. Heath, the chief innovation officer; and Ms. Rapinoe, the chief branding officer. They also have an advisory board that includes Deepak Chopra (whom they met through Mr. Nelson) and Jessica Tillyer, of SYPartners, a branding expert.

They have funded the first drop by themselves but plan to take outside investment for the second, which will extend from “head to toe” with socks, shorts, hoodies and hats. Each item has been considered to an extent that is not exactly normal for a fashion brand but is perhaps normal for a brand that sees itself as a vehicle for change.

The T-shirt, for example, though it looks simple, began with the question “What does it mean to be patriotic?” Not a straightforward issue when you are both representing your country and suing your national association.

“At first we didn’t want to use words at all,” Ms. Press said, “because they made us think of labels, but then we thought, what if we could use them not as a statement but to make wearers consider the issue.”

So while the words are red, blue and white, they are twisted, darker version of the shades. The shirt itself is a kind of dusty cream, made from Japanese cotton, and all the e’s are facing backward, almost as a challenge.

Only 500 of them were made — 250 in a cropped cut, 250 in a more oversize style, neither earmarked for men or women specifically — to spur demand. The women are, they said, learning as they go. “We believe in ourselves as a product: as soccer players, as brand ambassadors, as humans in the world,” Ms. Press said.

It is unclear how this will effect endorsement contracts with big brands, which may well chafe at the competition (even if it’s not direct) and the implications. In the end, said Mr. Nelson, “I told them there’s no guarantee any of it will work. But whatever does happen, at least you’re free.”

Vanessa Friedman is The Times’s fashion director and chief fashion critic. She was previously the fashion editor of the Financial Times. @VVFriedman