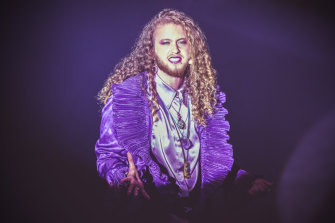 Assembling the largest cast of trans and gender-diverse artists in Australian history, Gender Euphoria is a liberating, joyful and poignant celebration of difference.

It’s theatre as the best and broadest kind of church, and as with The Butch Monologues at Midsumma Festival, you get the sense the progressive, community-building spirit that infuses it drew inspiration from Taylor Mac’s landmark A 24-Decade History of Popular Music at the 2017 Melbourne International Arts Festival.

That cabaret extravaganza sang and sermonised through centuries of social oppression and resistance, from women’s suffrage to slavery and queer rights. 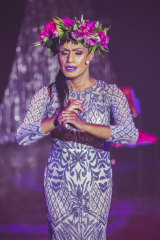 This affirmation of trans and gender-diverse talent achieves a similar sense of freedom and solidarity, on a more intimate scale. Hosted by Mama Alto, it offers a finely judged variety of acts – cabaret, drag, circus, comedy and spoken word – that reach both outwards to broader cultural context and inwards to lived experience.

Attitudes to trans and non-binary people are culturally dependent, and this diverse cast also refracts the prism of gender through non-Western tradition: the fa’afafine of Samoa, such as Amao Leota Lu, or the big-hearted Tiwi Islands sister Crystal Love.

Gender Euphoria moves from frenzied burlesque and outrageous lip-synching to more searching reflections. The experiences of social exclusion, and the more visceral one of not belonging in one’s own body are broached, often by way of testimonial.

Theatre as the best and broadest kind of church.

Uplifting vocals from Mama Alto, eye-catching circus feats and a rousing choric finale round out a show that, under Maude Davey’s direction, recasts the stage as sanctuary – a home where these performers can be themselves without fear or shame.

That’s an exciting congregation to join. No one could fail to be impressed by the emotional intelligence, strength of character and talent here, and if audiences keep even a trace of the welcoming spirit when they leave, the world will be a better place.