This audio walking tour of Newport from Tamara Saulwick is a model of its kind. It invites you to take a solo stroll through The Substation, the Newport railway station and environs with headphones on, as the history of the area comes to life.

Saulwick combines personal recollections, original research and oral histories from long-term residents of the suburb to give a beguiling glimpse into a submerged, working-class past that gentrification hasn’t quite erased. 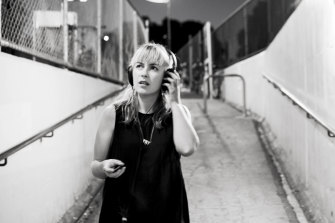 Take a self-guided, historical tour of Newport with Newport Archives at The Substation.Credit:Suzie Blake

The Substation itself, now a major arts and cultural venue, was transformed from a derelict and abandoned electricity substation near the Newport power plant, whose smokestack still dominates the skyline to the east.

As you walk around, the audio regales you with hidden histories. There are former Masonic lodges still standing and illegal betting shops in alleyways, long gone. You hear of games the children used to play with odds and ends from the railways, or of crowds lining the tracks to witness a royal visit.

Newport Archives lets you look with fresh eyes at the built environment around you … a tour well worth taking.

You walk in the footsteps of the hundreds of factory workers who trudged from the power plant to the railway station each day in the age before cars.

And you’re told about the effects of the Newport railway overpass when cars did arrive: they killed a bustling shopping strip and changed the character of the area forever. (You’re left to wonder if that unintended consequence might happen with level crossing removal works currently under construction.)

Newport Archives is site-specific micro-history that lets you look with fresh eyes at the built environment around you and imagine the untold stories it contains. It's a tour well worth taking, should you ever find yourself at a loose end in Melbourne’s inner west.