State-of-the-art technology will mix it up with retro charm in the Australian Centre for the Moving Image's $40 million overhaul, set to be revealed to the public in the middle of next year.

A key component of the renovations will see the outdated Screen Worlds permanent exhibit – originally installed just months after the iPhone arrived in Australia – completely made over. 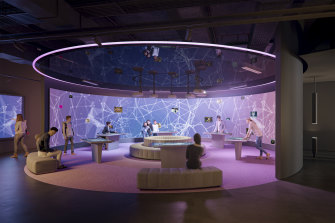 A new area will allow visitors to ‘download’ content from their ‘Lens’, edit their collection and view related content.Credit:ACMI

At the centre of the visitor experience will be a “magical” card called the "Lens", which recalls the discs inserted in classic View-Master toys.

“The Lens is inspired by a combination of pre-cinema glass lantern slides first used for projected images before they became animated and the View-Master, those fantastic objects that you flick through to see 2D or 3D images,” says ACMI chief executive and director Katrina Sedgwick.

The Lens has a chip inside that can be used to “collect” any object or media throughout the exhibition – and you'll get to take it home to keep. 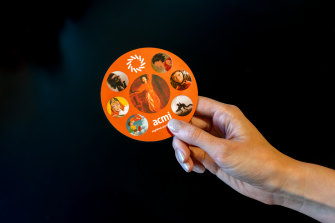 A prototype of the digital Lens device on which visitors can record their journey through the exhibition.Credit:ACMI

“It has magical qualities in a way,” Ms Sedgwick says.

“There’s a code on that device which means when you get home you’ll be able to put that code in [your phone or computer] and anything you collected will be there for you on the screen.”

Those who have visited Hobart’s Mona or the Arts Centre’s Music Vault may be familiar with this interactive, digital-driven approach to the museum experience.

Ms Sedgwick says ACMI’s has added value because its curators have created a world of “constellations” around the items collected on the Lens, which visitors can explore after their visit: “curated connections between those things you’re interested in and a whole lot of other media – art, film, TV, games." 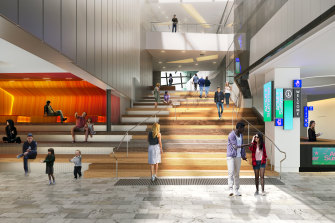 The Flinders Street entrance will be more open and connected.Credit:ACMI

It’s the equivalent of going down a Google or Wikipedia wormhole, she says, except the links have been thoughtfully curated by experts.

The ACMI building itself, which has been closed to the public since May for the redevelopments, was originally designed to be a shopping centre, says Sedgwick.

The revamp by architects BKK and designers Second Story swaps the Flinders Street escalators (which seemed to lead up to nowhere) for a wide, open staircase – just one example of how the museum will feel more “connected”.

The former Cube venue on the ground floor, which has hosted many acts during Melbourne’s Comedy and Writers festivals over the years, will become the ACMI gift shop and a larger events space will be built on the second floor. 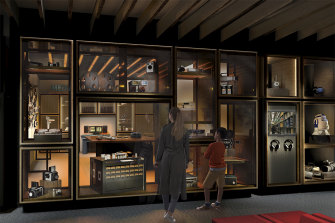 The Screen Worlds exhibition will still contain a chronological walk through of film, video and games throughout history but with a wealth of new content and sections.

There will be an increased focus on Indigenous media, and a new section on factual content exploring digital literacy, journalism, “fake news” and propaganda.

Another section will focus on “craft and world building”, looking at effects such as prostheses, and there will be a foley room where visitors can create their own soundtrack using various objects.

The ACMI team is working on an operating system called “XOS” that will allow its curators to update what’s playing on the screens in the public exhibit in just five minutes. 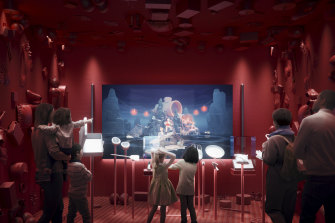 Visitors will be able to create their own soundtrack in the foley room.Credit:ACMI

“That will drive the exhibition and enable us to be as responsive as we must be if we’re exploring contemporary media,” Ms Sedgwick says.

The games section will also renew its content every quarter.

“There’ll be a lot of things moving through,” Ms Sedgwick says.

“We want the people of Victoria to be able to come back regularly and explore and play and share through this permanent exhibit.” 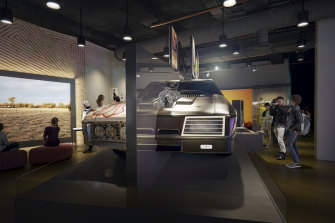 A car that is one half Mad Max and one half Bush Mechanic will be on display in the revamped ACMI.Credit:ACMI