Anthony Albanese stared into the eyes of a young Brangus calf and said: “G’day mate, how are ya?”

In Rockhampton, which boasts of being Australia’s beef capital, the cow conversations are usually geared to medium or medium rare. 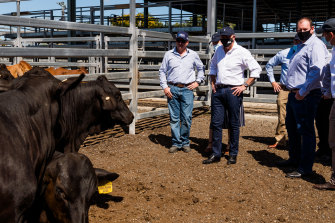 Opposition Leader Anthony Albanese with a Labor delegation is touring Queensland, where it hopes to pick up some seats.Credit:James Brickwood

The sight of a Labor leader near northern Australian cattle would trigger many in the industry, who are still fighting against the Gillard government’s dramatic shutdown of the live cattle trade a decade ago.

But Albanese, who opted for the Beef Week cap rather than a 10-gallon hat, was here to convince Queenslanders things are different now. Labor, he says, is on their side.

Capricornia, which centres around the town known to locals as “Rocky” and takes in the town of Yeppoon and Ooralea, Marian and Sarina, in the southern suburbs of Mackay, is the seat Labor holds when it’s in government. Under Whitlam, under Hawke and under Rudd.

But after a 14 per cent swing on its primary vote at the last election it starts from further back than it would like.

The ALP holds just six of the 30 seats in the state. When Rudd swept to power in 2007 Labor won nine seats off the Coalition in Queensland alone.

Labor is hopeful of winning two or three seats in Queensland at the next poll, likely in May. Party insiders say that’s most likely in the marginal seat of Longman, just north of Brisbane, as well as Flynn, just south of Rockhampton, with the retirement of LNP member Ken O’Dowd, and potentially Leichardt in the far north of the state, held by Warren Entsch.

But after the smoking ruins of 2019, Albanese is pitching to all regional Queensland. Backing blue-collar industry, tourism, and even beef producers.

The federal court ruled in early June that the blanket suspension of live cattle exports by the Gillard government in 2011 was invalid, “capricious and unreasonable”, and amounted to “misfeasance in public office”. 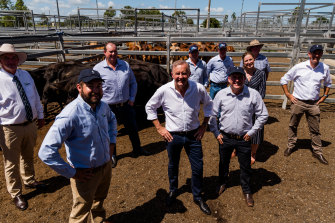 The Morrison government decided not to appeal the federal court ruling despite fears it could restrict the freedom of ministers to make decisions.

Announcing Australia’s largest beef exposition would receive a $6 million funding boost if Labor wins this year’s federal election, Albanese said regional Queensland had nothing to fear from a government he led.

He backed his record as a minister in the Rudd and Gillard governments, creating Infrastructure Australia and Regional Development Australia.

“In each area, that was characterised by a cooperative frame, in the Hawke tradition, he said. A cooperative frame whereby you get businesses and unions and community leaders around the table. You ask them, people on the ground, including through local government, what their needs are, and you get better outcomes.”

Visiting Flynn with Gladstone mayor and Labor hopeful Matt Burnett on Thursday afternoon, Albanese was happy to talk about his climate policy with local workers at Rio Tinto’s alumina refinery.

The LNP candidate, Colin Boyce, has spoken out about Labor’s emissions reduction target of 43 per cent by 2030, saying it would lead to job losses, regardless of the party’s promises. He’s also cast doubt about the electorate’s ability to cope with a transition to net zero.

Albanese is adamant he won’t impose deadlines on fossil fuel companies to end operations and says his polices won’t impact the decision which will be eventually decided in overseas boardrooms.

“I am about jobs, and I’m about respecting workers wherever they work,” he says. “I’m about making sure that those decisions, as I’ve said consistently, will be determined by markets.”