And according to Aldi, which is stocking the duvet, it will prevent squabbles caused by one bedmate being warmer at night than the other. It was launched after a survey found a third of couples row over the bedroom temperature at night. People who have put up with the wrong weight of duvet for years are calling it the Holy Grail of bedding. One shopper wrote on Aldi’s website: “What a great idea – after 55 years of marriage at last we found a duvet to suit us both.

“I feel the cold so like a nice toasty duvet. My husband gets too hot so the 4.5 tog is great for him.”

Another said: “This made for two is great, so I can have a lighter tog and my husband likes a heavier tog.”

And another well-rested buyer wrote: “Bought this ready for the onset of spring/summer when one of us still wants the glorious warmth of 10 tog and the other sleeps on top of the covers. Let marital harmony go on!”

Both are manufactured by the bedding brand Slumberdown. 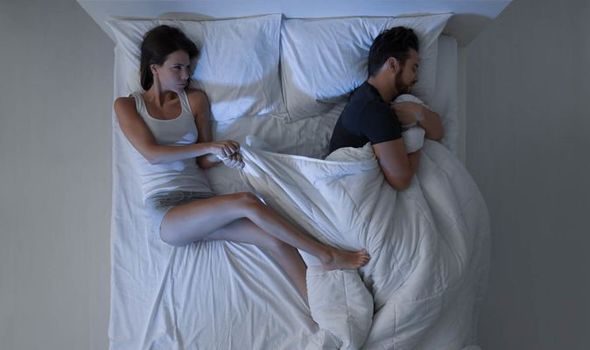 Aldi said the product had been launched “in response to Brits’ ongoing troubles in the bedroom”.

A spokesman for the supermarket chain added: “The duvet for two provides a much-needed sleep at an affordable price.

“It’s perfect for couples who spend their nights hogging the duvet or chucking the covers off.”