Did she find her dream guy? One of the most talked-about moments from Kim Kardashian’s Saturday Night Live hosting debut included a Bachelorette–esque sketch and a celebrity lineup of suitors.

Most Memorable ‘Saturday Night Live’ Hosts Over the Years

During the “Dream Guy” skit on the Saturday, October 9, episode, the 40-year-old Skims founder played Rochelle, a character who was searching for love after meeting a variety of eligible bachelors, including Tyler Cameron, Chace Crawford, Jesse Williams, Chris Rock, Blake Griffin and John Cena.

“I have no doubt in my mind that my husband is in this room,” the Selfish author noted in the sketch. “In fact, I wish I could marry each and every one of you, but that would be way too many husbands.”

Kardashian began the token ceremony — a parody on The Bachelorette’s rose ceremony — by calling up the Covenant star, 36, who appeared as himself.

“Chace, I had so much fun at the go-carts with you. Thank you for telling me about your hit show Gossip Girl,” she said, before the Texas native responded, “I’m also on The Boys, FYI.” 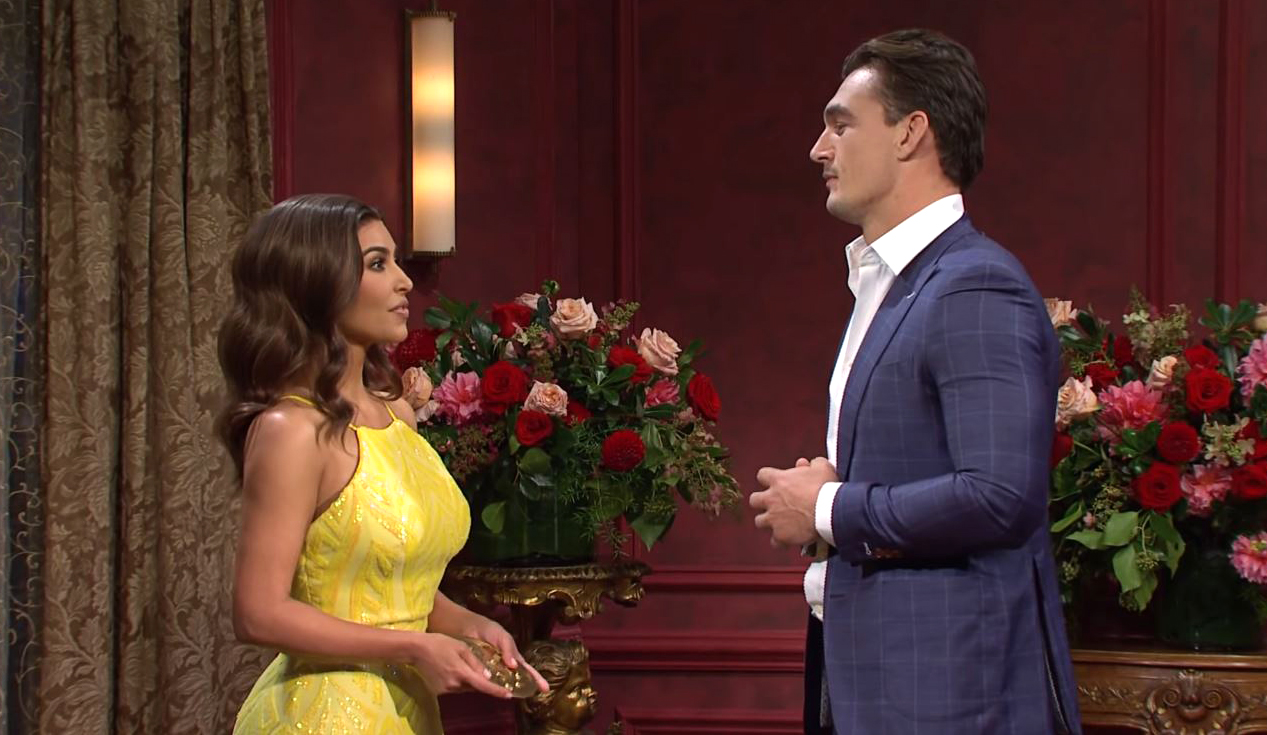 Next up, the Bachelorette season 15 alum, 28, received a token and the Skims mogul praised Cameron for his “hot body.” The Florida native graciously accepted the pendant before noting he would see her “in the hot tub,” in another call-out to the ABC dating show.

After giving tokens to the Grey’s Anatomy alum, 40, the Spiral star, 56, and the NBA athlete, 32, — who famously dated her sister Kendall Jenner in 2017 — Kardashian’s Rochelle noted that she struck up an unexpected connection with a producer.

Then, Amy Schumer made a surprise appearance as said producer, coming out from backstage. After the two women admitted they had each never dated a woman before, they couldn’t deny there was something in the air between their characters. Schumer, 40, accepted the golden token with “both of her holes.”

Kardashian’s final choice came down to the former professional wrestler, 44, and Kyle Mooney’s Zeke. The reality TV star eventually chose the F9 actor despite his “wife situation,” referring to his 2020 nuptials with Shay Shariatzadeh. As a result of being dumped, Mooney, 37, declared, “This one hurts,” before fake-falling into a fiery pit. 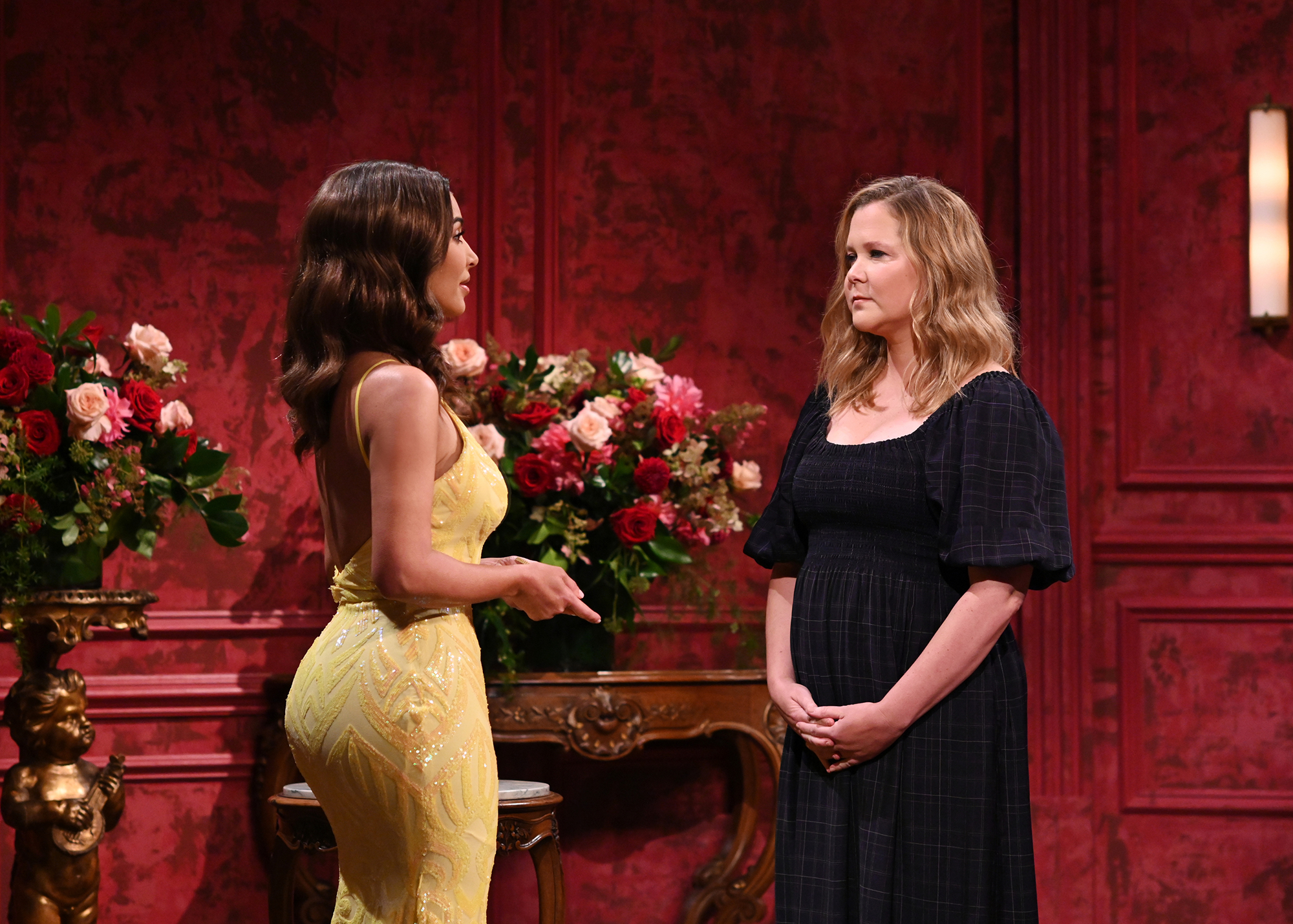 While the sheer number of celebrity cameos in the SNL sketch was impressive in itself, perhaps the most notable (and potentially awkward) appearance went to Griffin.

“Power forward for the Brooklyn Nets, Blake G.,” Kardashian called out during the skit. “Blake G., I’m going to be honest, your behavior at the luau barbecue was inexcusable, but you’re also a six-time NBA all-star and that intrigues me. Do you accept this token?”

Before fake-romancing the KKW Beauty founder, Griffin was linked with her younger sister, which Us Weekly confirmed in October 2017.

“They’re legit. They’re a full-on couple,” a source close to the 25-year-old model told Us at the time. “Kendall has been going to a lot of his games and they have been enjoying time at home when Blake is in town. They’re good.” 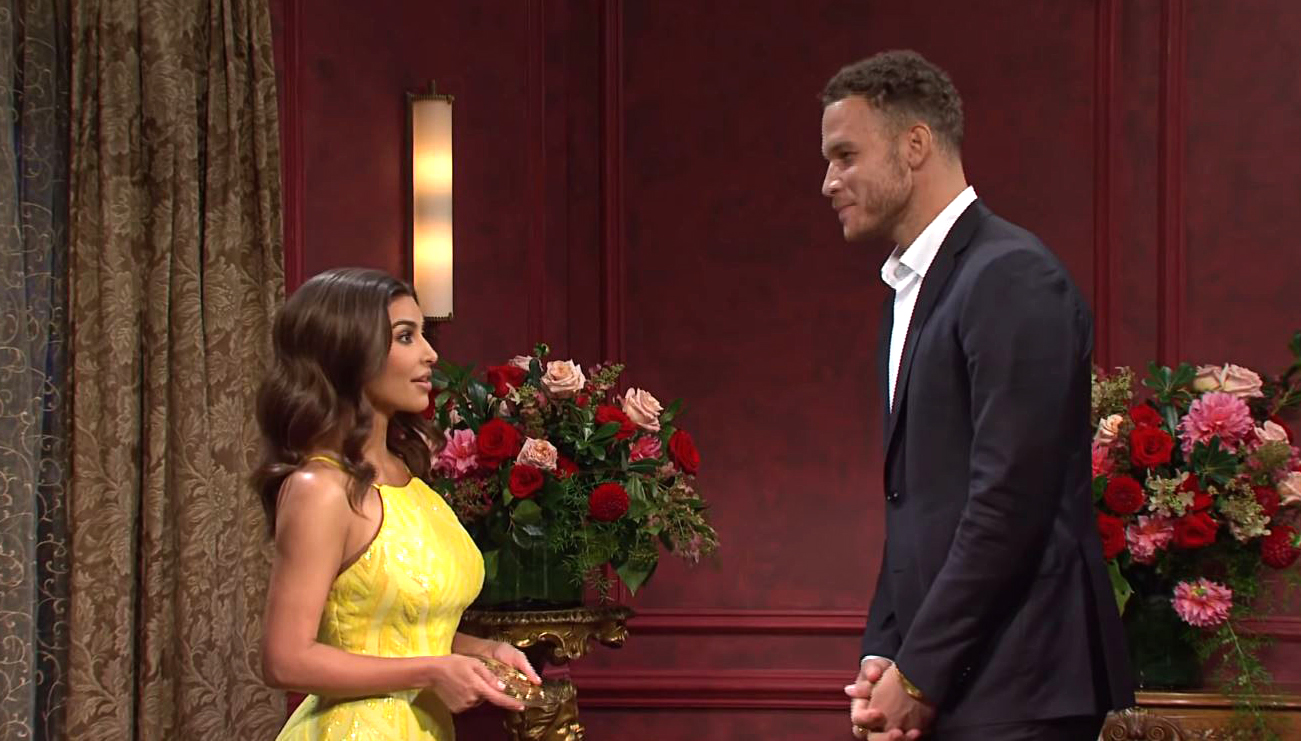 After Jenner publicly cheered on Griffin at several NBA championships, the pair called it quits in 2018 after less than one year together. She has since moved on to another NBA athlete, Devin Booker, whom she began dating in August 2020.

“Travis, Travis baby, ugh, I have to do my show,” Kim-as-Kourtney said, sitting on Mikey Day’s lap, who pretended to be the 45-year-old drummer. “Oh my god, did you just call me your honor? Baby, you are so epic. Will you drum ‘All the Small Things’ on my ass when we get home?”

Watch the SNL skit above!