Months after she believes she contracted the virus, Milano is still feeling it.

The symptoms of COVID-19 are still affecting Alyssa Milano, who believes she first contracted the respiratory illness back in April.

“I’m ok. I’m starting to physically feel better. I’m still taking an aspirin every 3 days to thin my blood, fish oil, vitamin D, C, zinc and a B complex,” she wrote. “I still have occasional heart palpitations. I still forget my words (absolute worst part). But it’s not nearly as bad as it was a few weeks ago.”

Saying she feels “better,” Milano revealed she had another CT scan done of her lungs and an MRI of her heart, which both came back looking “normal.”

“I get super scared sometimes, though. Not of getting sick again but of my loved ones getting sick,” she added. “I don’t ever want them to have this thing. It’s a beast. So I vacillate between being so grateful and so terrified. Grateful that it was me who got sick and terrified that friends or family will be sick.”

As she asked her followers how they’re holding up, Milano also told them to “be safe”and let her know “you’re ok.” 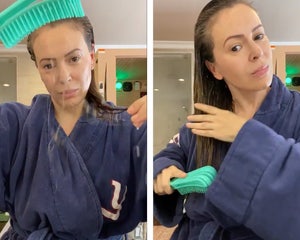 Alyssa Milano Pulls Out Her Hair, Says It's Due to COVID-19

In August, the actress revealed she’s been losing hair thanks to Covid.

“I just wanted to show you the amount of hair that’s coming out of my head as a result of COVID,” she began, before showing her detangling brush to the camera. “As you can see, in there, there is no hair in there right now.”

The “Charmed” alum then proceeded to brush her wet hair several times. After a few swipes, Milano held up a large chunk of hair that had come out of her head. She repeated this a few times before ultimately revealing all of the hair she had lost from brushing.

“One brushing, this is my hair loss from COVID-19,” Milano said, showing the glob of hair. “Wear a damn mask.”

While Milano said she tested negative twice for the virus at the end of March, she took another test four months later, which came back positive for antibodies.

“I had Covid19,” she said in August “I just want you to be aware that our testing system is flawed and we don’t know the real numbers.”