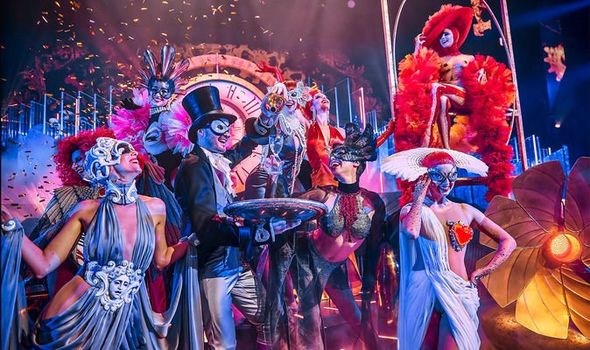 “This is the most spectacular show in the world,” says Broadway star and leading man Olivier Erie St Louis, who plays Time. “I’ve worked all around the world and never seen anything like it. Especially at this time in the world, how many companies are able to stage a show of this magnitude with live entertainment in a theatre?” I’d have to agree, after my jaw hit the floor at the dazzling whirl of aerialists, trapeze artists, gold-clad showgirls, waterfalls, 14 fountains, an eight-metre geyser and a central pool that holds 160,000 litres of water each night and then smoothly turns back into a main stage glittering with dancers and musicians. Don’t forget the huge central, circular stage which rises, revolves and tilts throughout the night in a mighty feat of hydraulic engineering. It may look easy, but Palast Director Dr Berndt Schmidt reveals the extraordinary work, hopes and dreams that lie below the surface of the biggest ‘splash’ hit in Europe.

He says: “We have seen shows opening here and around the world but they are existing productions with sets and costumes. We have created everything new during the pandemic.

“We faced many disasters. We had all our sets stuck in the Chinese harbour because the virus stopped all the workers. Our costumes and fabrics got stuck in India. There were times I wondered what I was doing! Was I too ambitious? But that is also the theme of the show. Finding a way back to the light after the darkness.

“I shouldn’t say it but I’ll say it – sometimes I think what we do here is better than Las Vegas. Here we have the freedom to be more brave, to go deeper.

“Germany is one of the very few countries in the world where theatres receive substantial money from the state. The theatres and opera don’t need money from investors, so you have freedom and a very creative scene. When it comes to theatre, opera and a show like this, you will not find anything like this in Europe.”

The show follows the story of a photographer who loses his muse during lockdown and blames Time for stealing his art and inspiration from him, but Olivier and Berndt both describe how the meaning of the show and the ethos of The Palast itself go far beyond that.

Olivier says: “It is not what time does to all of us but what we do with the time we have. We have all learned now more than ever that once time has passed it is gone, so use it wisely. So many people have lost so much during the pandemic and have to rethink who they are and what their life means. It’s about looking at everything we have been through as a chance for a rebirth. A new understanding.”

Berndt is driven by an even deeper passion to reflect and celebrate the values of modern society and to learn from some of the darkest moments of German history.

Berndt says: “We realise you don’t need to explain darkness and loss to people right now. We have all lived through it and experienced it the past two years. So now we must look to the light.  I want this to entertain and show people that diversity is beautiful. We have people from 26 nations on stage and hundreds more behind the scenes. This is not a German production, this is a world production.”

The Palast opened in 1985, four years before the Berlin Wall fell, one of the last great shock and awe contructions of the communist era. Yet, now it represents an unimaginably different world.

Bernd adds: “We are 250 metres from the Berlin Wall. I feel proud that we are in the heart of East Berlin but outside the theatre, we have our banners and they are the colours of the rainbow to symbolise respect and tolerance. We did this about five years ago when there were many anti-Jewish demonstrations marching through this district past the theatre.

“As Germans we have seen democracy slip away before and we are facing rough times again. Berlin is very liberal, but not in every street, every area.”

Berndt also remembers his country’s and his own family’s history: “My father’s father and my mother’s stepfather were both in the SS. Only one survived the war, but I always asked him, “How did this happen? How did you not see it? Why didn’t you do something?’ He would never answer me.

“Our founder Max Reinhardt was Jewish and by the beginning of the 1930s that was becoming dangerous. Our director Erik Charell was Jewish and gay. Our third founder Hans Poelzig was a modernist and architect. All three of them believed what was happening in the country did not represent Germany, but they were not allowed to work during the Third Reich.

There is an extremist far-right party (AfD) in the parliament now. So we are saying we stand for diversity, for freedom and democracy. Because times change so quickly and suddenly we might have to fight for these values again.

“As the director of such a large theatre I never want to be like that, to be silent.”