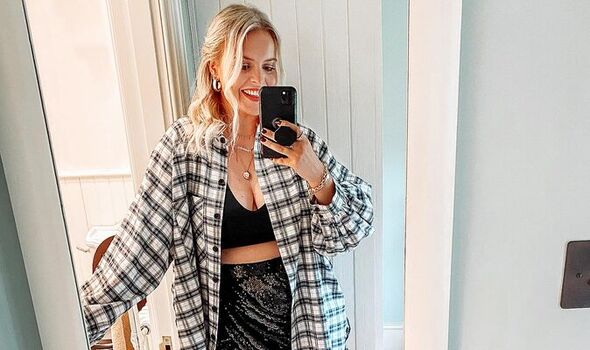 Every time she posts a picture on Instagram, Alex Light gets a barrage of abuse. A body positive influencer, podcaster and author, the 33-year-old has nearly half a million followers on the social media platform. But not everyone is happy when she writes about body confidence and diet culture.

“Every single thing I post receives some backlash. It feels like people are gossiping about you – but to your face. Some just yell straight abuse. However, I truly believe what I’m saying is important, so I keep going.”

Throughout her 20s, Alex was a fashion and beauty writer for a glossy magazine. On the outside, her life looked glam with invites to A-list parties. But the reality was different.

“I’d share my outfits and beauty looks on social media – cool pictures against beautiful backdrops. But I’d blur my skin and nip in my waist to make my already-thin body even thinner,” she says.

“People would tell me, ‘your life looks so cool’. But inside I was screaming. I needed help. Behind the scenes I was in the grips of an eating disorder that was taking over my life.”

Alex grew up in the Wirral and went on her first diet aged 11.

“From the moment I realised I could manipulate my body with food, I did,” she says.

“I wasn’t fat, but I was chubby. And I was really aware of it. From 11, I tried every single diet under the sun. I would scour magazines looking for new ones. I felt that a woman should be thin, and if I wasn’t thin then I wasn’t attractive.”

Aged 25, Alex was diagnosed with anorexia, then bulimia and binge eating disorder.

“For me, it was bulimia that was the catalyst for change. It felt particularly gruelling on my body,” she says.

“I’d lost a lot of friends, my social life and family life had suffered. When you have an eating disorder you can function but only at a very basic level. I knew I had to try and get better.”

Recovery was by no means linear.

“It was up and down and all over the place,” says Alex, who lives in Sevenoaks, Kent, with husband Dave, 37, who works in the sports industry.

“It was really difficult and it took a long time to feel like I was in a place of progress. I went to therapy and as I started to recover, my therapist talked to me about diet culture.”

It galvanised Alex into action.

“I thought, why am I sharing what I’m sharing on Instagram, when I could potentially help a whole lot more,” says Alex, who at the time had 40,000 followers. So aged 27, she shared a post that changed her life.

“I opened up about my weight struggles. Until then, nobody but my parents knew,” she says. There was such shame attached – stigma, embarrassment. There’s a myth that eating disorders are about vanity, which is just not true.”

“So many people messaged me and told me they had been through something similar. We’re far less alone than we think. I felt compelled to keep going.”

Now Alex is on a mission to change the way we feel about our bodies.

“Our need to be thin is not innate, it’s taught,” she says.

“And often we don’t even realise what we’re being subjected to because it’s subtle.”

Responsibility, she says, lies first and foremost with the diet industry.

“Weight-loss products and services make money for a lot of people, and therefore they’re not going anywhere,” she says.

“It’s down to us to reject diet culture. We need to build up our own personal armour to it, so we can get rid of the notion that we need to look a certain way. Being the size we’re meant to be is the best thing for mental and physical health.”

The fashion and advertising industries also play a role.

“We’re still not there in terms of true representation, diversity and inclusivity,” she says. “The average UK woman is a size 16, so why on earth do so many fashion brands only go up to a size 18? The excuse that it’s too complicated or that material costs too much just don’t wash any more.”

And then there’s social media.

A new bill may soon make it illegal to post retouched photos without declaring they have been altered, and Alex says it can’t come soon enough.

“Historically it was celebs and models who were retouched, and we had an idea they’d be airbrushed. But now your best mate can do it on Instagram. It’s so pervasive,” she says.

“It means we don’t know what we’re looking at most of the time.

“Comparison is such a big thing generally, but it’s so heightened on social media. And people are comparing themselves to things that aren’t even real.”

Finally, she says, a healthy body image should be taught to children.

“Kids go out into the world and see diet culture everywhere. There’s nothing you can do about that, but you can give them the tools to let it wash over them. The truth is their body is OK and they don’t need to do anything to it.”

“Being thin is not going to be our legacy, it’s not the mark you’re going to leave on the world.

“What’s important is relationships, connections, bonds, morals and values. Yes, it’s hard to have perspective on that when the world around you is screaming ‘Be thin’. The message is ubiquitous, it’s loud.

This month sees the release of Alex’s new book, You Are Not A Before Picture, in which Alex challenges readers to love their bodies just as they are.

“With every post, with every page of the book, I hope to instil the idea that being a smaller dress size doesn’t have anything to do with true contentment and happiness.