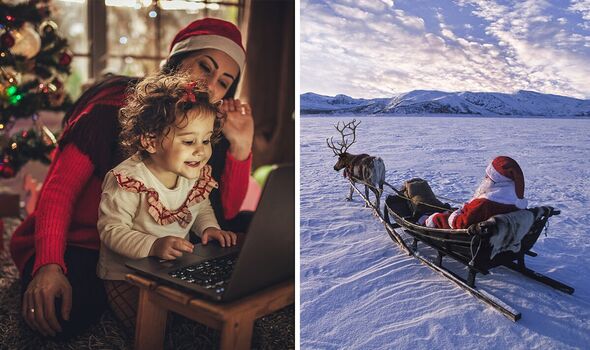 Express.co.uk spoke to various psychologists and parenting experts who gave their professional opinions on one of humankind’s biggest lies. Some stressed that the myth of Santa was harmless and even helpful to a child’s growth and development, while others claimed lying to a child about Father Christmas could be damaging for both parent and child.

Lordia Lewis-Spencer, qualified counsellor and psychotherapist, explained “there is no research evidence stating the findings on Santa and how not sharing the truth impacts children”.

She said she believes Santa can be just as magical for parents as he is for children – so much so that some children prefer to prolong the lie even when they know the truth, so as not to ruin the “magic”.

“I would like to think myth of Santa can be perceived as magical and childlike in intent, encouraging the development of our imagination,” Lordia said.

“From a psychological perspective, building secure attachment with your children are ideal. Secure attachment styles are fostered through trust. It’s built by facilitating a sense of honesty in the relationships with children and their primary care givers at pivotal points in their developmental stages.

“The potential to break trust may not necessarily lie in the myth about Santa, but how and when this myth is debunked with children.

“During the conversation, the child should know that telling the truth is still important. There is also a responsibility on each parent when it comes to how far they stretch the myth of Santa and what aspects they feel is appropriate to include or exclude.”

Lordia added: “Through my years of working with adults in therapy, on a few occasions they told me that, as children, when they found out Santa wasn’t real, they chose not to tell their parents because they understood that even they got some joy out of the myth of Santa.”

Mairead Molloy, a relationship psychologist, agreed with Lordia that believing in fictional characters, such as Santa, can help develop a child’s imagination.

She said: “It is better to tell the kids there is a Santa. Letting them grow through fantasy and imagination is positive.

“Don’t get caught up believing there’s one specific age when you need to come clean, or that there’ a single right way to handle the situation. Choose to address the Santa issue based on your values, beliefs, and the child’s needs.

“Take cues from them and their understanding of the world. Usually, somewhere between the ages of five and seven kids begin to think a little more critically.

“And it occurs to them that flying reindeer and a guy coming down the chimney might be a little far-fetched.”

Mairead advised parents to “let a child be a child”. She continued: “When children are given such freedom to play, they are more likely to engage in higher levels of social interaction, cognitive skills such as decision-making and reasoning, empathy, and physical activity. In turn, they are less likely to become inattentive, anxious, or depressed and unhealthy.

“From the outside it looks like lying to your kids is generally a bad idea. However, if you want to tell a little fib to your kid about the old man from the North Pole, you probably aren’t going to ruin their life or send your relationship with them into orbit.

“When you think back to that time before you were exposed the truth about Santa, it was a lot of fun. Believing in Santa and awaiting his visits was thrilling and enchanting.

“There aren’t many magical things that happen in life. When they do present themselves, it can be a great joy, even if it is only for a few precious years.”

Dr Lisa Turner, a trauma and emotional resilience expert, noted that while there are parents who believe it is important to preserve the magic of Santa for as long as possible, there are others who think that honesty is the best policy.

She said: “Ultimately, the decision is up to the individual parent – it will depend on their own personal beliefs and values, as well as their child’s age and temperament.

“The impact of telling children the truth about Santa will depend on their age, personality, and individual circumstances. Some children may be disappointed or upset when they learn that Santa is not real, while others may take the news in stride.”

Although Dr Lisa stressed that, in the long term, whether or not a child believes in Santa isn’t likely to have a significant impact on their overall wellbeing or development, she added that deliberately lying to a child can have “devastating” effects.

She explained: “Lying to children can undermine their trust and confidence in their parents, as well as their own ability to discern truth from fiction. They even start to doubt themselves.

“I’ve had some people feel they have been gaslit by their parents. The issue is that their parents deliberately lied. They didn’t just share a belief they themselves had – they knowingly told a lie. Knowing they believed in a lie has led them to stop trusting themselves. They start to second guess everything making it almost impossible to make decisions and choices.

“Of course, not everyone is psychologically damaged by the lie of Santa, but when it happens the effects can be debilitating and even devastating in some cases.”

But lying can have a negative impact on parents too. Dr Lisa noted that parents can feel guilty about hiding something from their child, especially if they are disappointed or upset when they find out the truth.

“However, many parents who choose to perpetuate the myth of Santa do so out of love and a desire to bring joy and wonder to their child’s life,” Dr Lisa added.