Chocolate fans in no doubt that the bottom of the Cornetto cone is the best part of the ice cream favourite are in for a treat – you can now buy just the tip on its own.

Food giant Wall’s has started selling the wafer and chocolate treats – which have been increased in size to a more sizeable 7cm – after listening to consumers telling them how much they loved the tips.

Currently on sale in Tesco, in-store and online, a box of Cornetto Tips will set you back £3 for five.

Although there’s no actual ice cream in the product, the tips are being sold as a frozen treat – to ensure that the chocolate cracks and crumbles in exactly the same way that it does at the bottom of the Cornetto.

There were plenty of complaints on social media about the price – 60 pence each – but that’s perhaps before shoppers realised the product had been upscaled to a full-size snack, measuring around 7cm.

Walls has long since responded to requests from ice cream lovers about novel ways to reinvent an old favourite, with vegan, mini and even Unicornettos all surfacing in recent years. 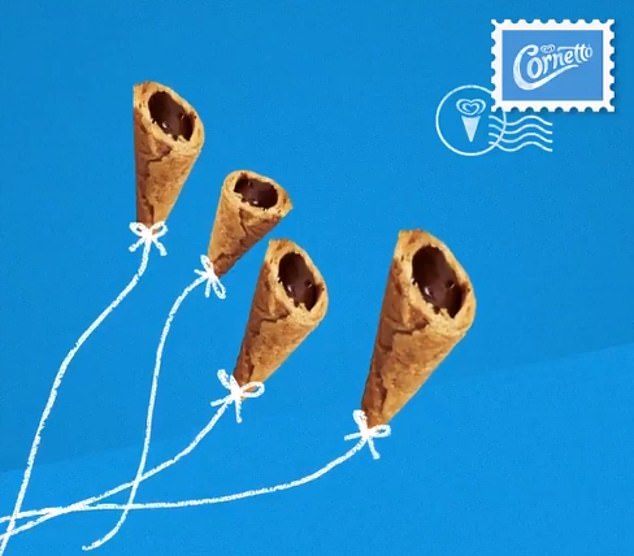 The company has been promoting the chocolate-filled tips, which are full-sized treats and are found in the freezer section at Tesco

Whether the tips are here to stay remains to be seen. Instagram food critic Kev’s Snack Reviews was left largely unimpressed by the treat though, writing: ‘I can confirm these are a bit of a rip-off, and really not that amazing.

He continued: ‘These have no ice cream, just solid compound chocolate (not even real chocolate!) and crunchy wafer, which is fun but the excitement wears off. Also why do they need to be in the freezer section?’