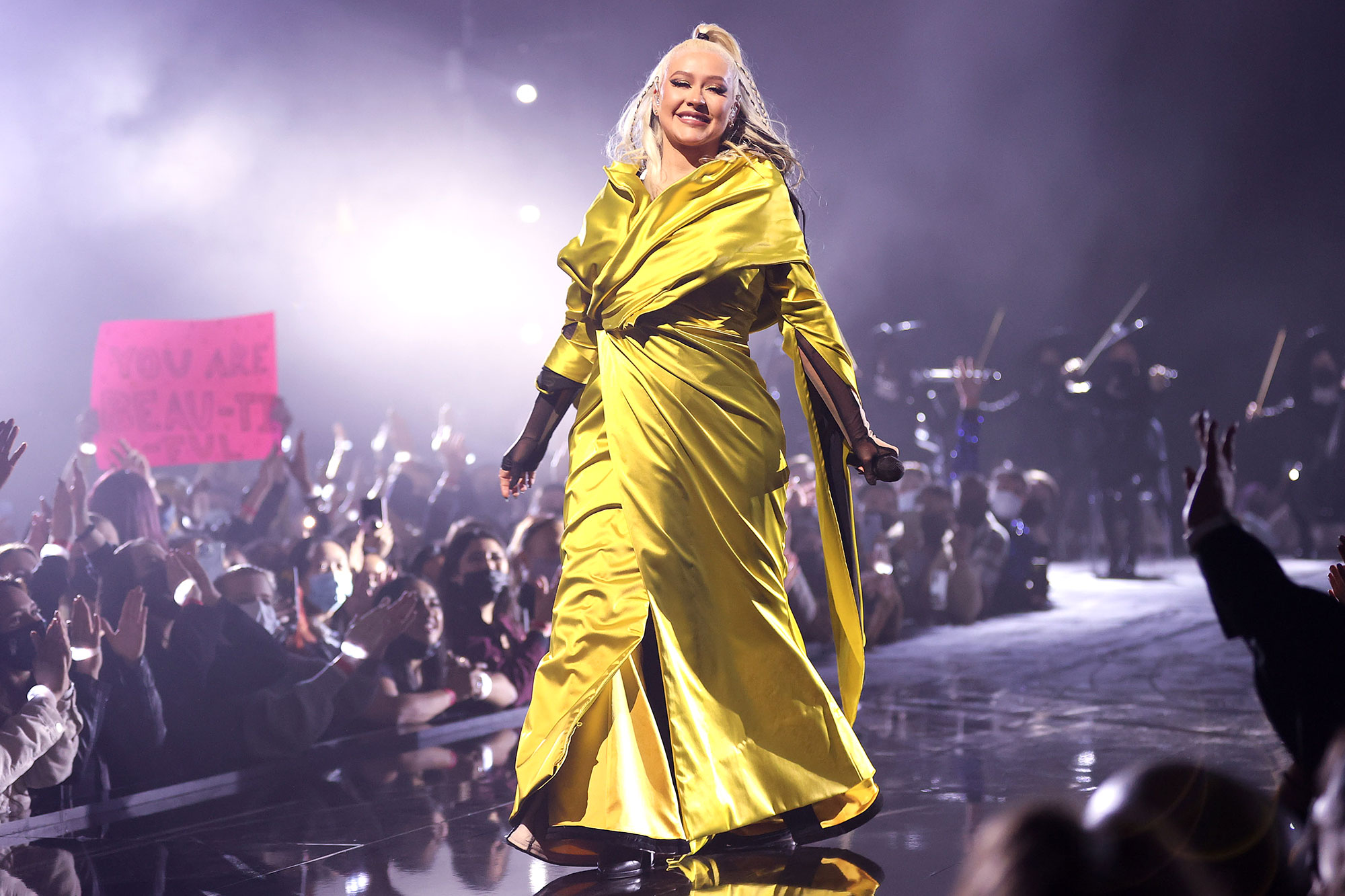 She’s been an icon for years, and now she has the trophy to prove it. Christina Aguilera was awarded the Music Icon Award at the 2021 People’s Choice Awards.

Everything to Know About the People’s Choice Awards 2021

The “Beautiful” singer, 40, is the first-ever recipient of the new PCA statue. Becky G, who collaborated with Aguilera earlier this year on the Spanish-language single “Pa Mis Muchachas,” presented the honor to the Pennsylvania native at the Barker Hangar in Santa Monica, California, on Tuesday, December 7.

“My artistry has always been for the fighters in this world, for those who face adversity, for those wanting to invoke change, my music is for you,” Aguilera said in her acceptance speech. “Believing in yourself is often the biggest obstacle of all. Throughout the years I’ve heard your stories about the impact of songs like ‘Beautiful,’ ‘Fighter,’ ‘Can’t Hold Us Down’ and, yes, even ‘Dirrty.’”

The PCA winner continued, “I want to thank all of the women I’ve been blessed to share the stage, microphone and recording room over the years. You are all icons to me. I’m proud we have strengthened the voices of women in the music industry.”

The Burlesque star also performed a never-before-seen medley that included her biggest hits reimagined — including “Beautiful,” “Genie in a Bottle” and “Ain’t No Other Man” — as well as “Somos Nada” from her new Spanish-language album during the People’s Choice Awards, which was broadcast live on E! and NBC.

Christina Aguilera’s Most Relatable Motherhood Quotes Over the Years

Aguilera’s career launched with a 1988 Star Search appearance when she was 8 years old. Though she lost, the soprano continued to look for ways to have her voice heard, and landed a role on The New Mickey Mouse Club in 1992. She released her first album in 1999, skyrocketing her to household name status as a pop star. 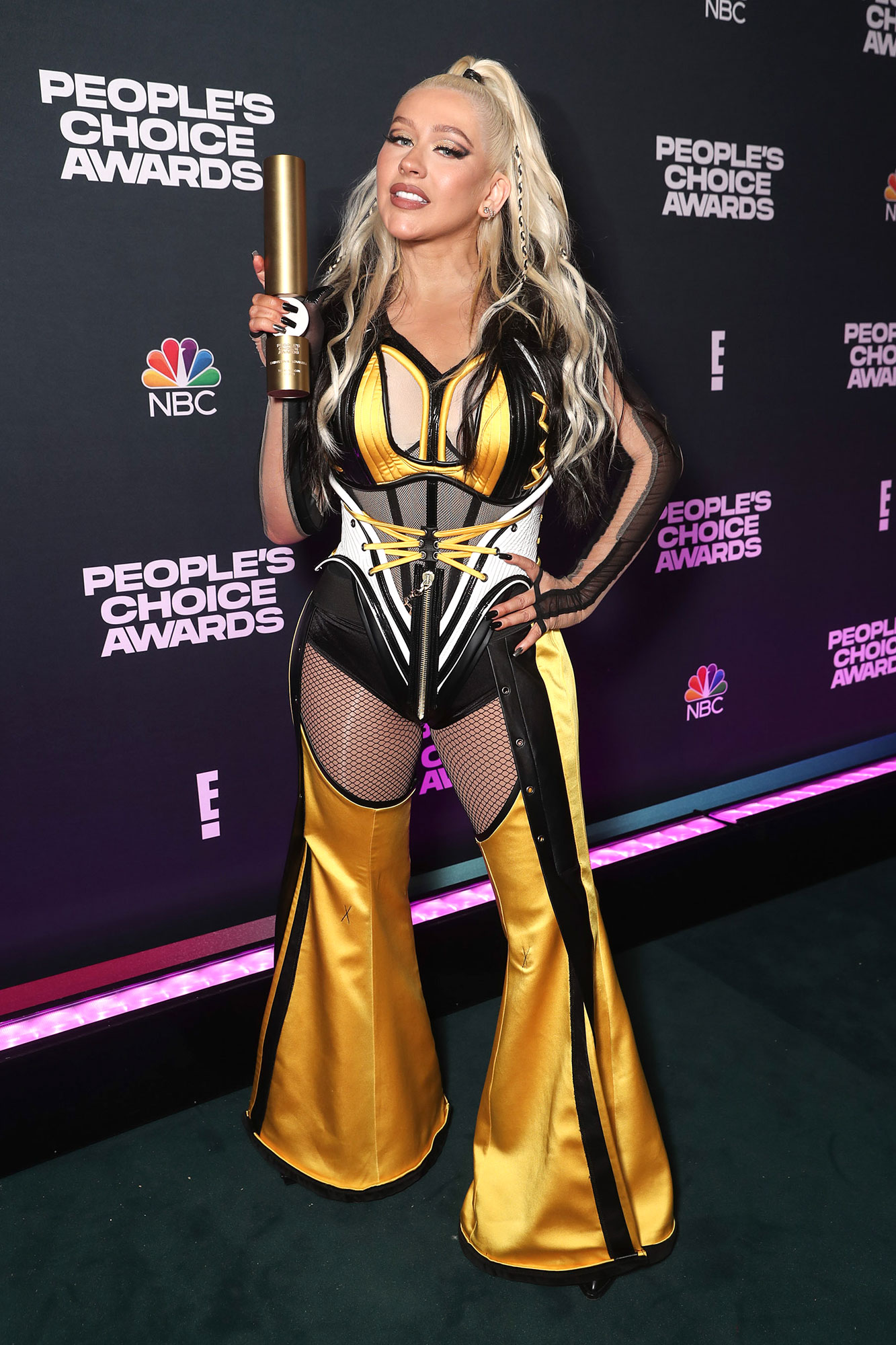 After hitting it big with “Genie in a Bottle” and “What a Girl Wants,” she won the Best New Artist Grammy Award in 2000. Then, Aguilera changed the course of her career with her 2002 album Stripped, reinventing herself for the first of many times and laying the groundwork for her road to becoming the PCA’s first Music Icon.

Ahead of the show, the “Beautiful” singer teased her performance. “It’s an honor to receive the first-ever Music Icon award tomorrow at the People’s Choice Awards,” she shared via Instagram on Monday, December 6. “I’m so excited to return to the #PCAs stage with a special performance featuring ‘Somos Nada’! Can’t wait to see all the #Fighters in the audience.”

Hosted by Kenan Thompson, the People’s Choice Awards celebrated all types of entertainment, from movies to TV to music to TikTok, voted on by fans.

Joining Aguilera, who plans to release her ninth studio album in 2022, with Icon trophies are Halle Berry, who is the 2021 People’s Icon, Dwayne “The Rock” Johnson, hailed as the 2021 People’s Champion, and Kim Kardashian, who has been dubbed the 2021 Fashion Icon.