Australian Border Force and police officers faced off against angry detainees in the Christmas Island detention centre on Saturday night as men held there protested for better medical care and improved internet access to communicate with families, friends and lawyers.

Refugee and detainee advocates said detainees in two compounds on Christmas Island had been tear-gassed, causing at least one detainee to collapse, as some climbed onto roofs and broke a perimeter fence and fires burned in the facility just days after a riot on Tuesday. 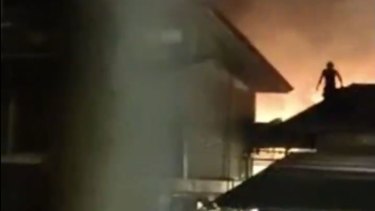 Footage posted on social media shows a Christmas Island detainee jumping on the roof of a compound on Tuesday night, with a fire in the background.Credit:Facebook

One advocate who had spoken and exchanged text messages with detainees on the island throughout the night said men facing indefinite detention had launched the protest because they felt promises to increase internet access and provide medicines made after the previous protest had not been honoured.

"Men feeling they had again been lied to, cheated and disaffected broke the permitter to seek internet access to contact their loved ones," said Filipa Payne, co-founder of Iwi N Aus, a group that advocates for New Zealanders in Australian detention.

"From there it has turned into a war zone; last night was really horrific," Ms Payne said. She said detainees had struggled to breathe because of the tear gas.

A spokeswoman for the Department of Home Affairs, which is responsible for Australia's detention centres, confirmed its personnel had been working with the Australian Federal Police to restore order to the Christmas Island facility.

There had been a "disturbance involving a small number of detainees," the spokeswoman said. No injuries have been recorded.

Detainees on the island are there because their visas have been cancelled as a result of committing crimes in Australia, she said. "This cohort is detained because of their risk to the Australian community."

About 230 people are in detention on the island.

Among them is a Tamil family from Biloela, who were removed from the central Queensland town and eventually taken to Christmas Island in August 2019. Nades, Priya, and their daughters Kopika and Tharunicaa remain on the island but are housed separately from where the disturbance happened.

Refugee Action Coalition co-ordinator Ian Rintoul said Christmas Island "has long been the Devil’s Island of Australia's detention regime. It should be closed."