CLOTHING and games pushed up shop prices in June as inflation rose to 0.6 per cent – up from 0.5 per cent in May.

The Consumer Price Index (CPI) rate of inflation rose as the coronavirus crisis brought an abrubt end to usual summer discounts in shops. 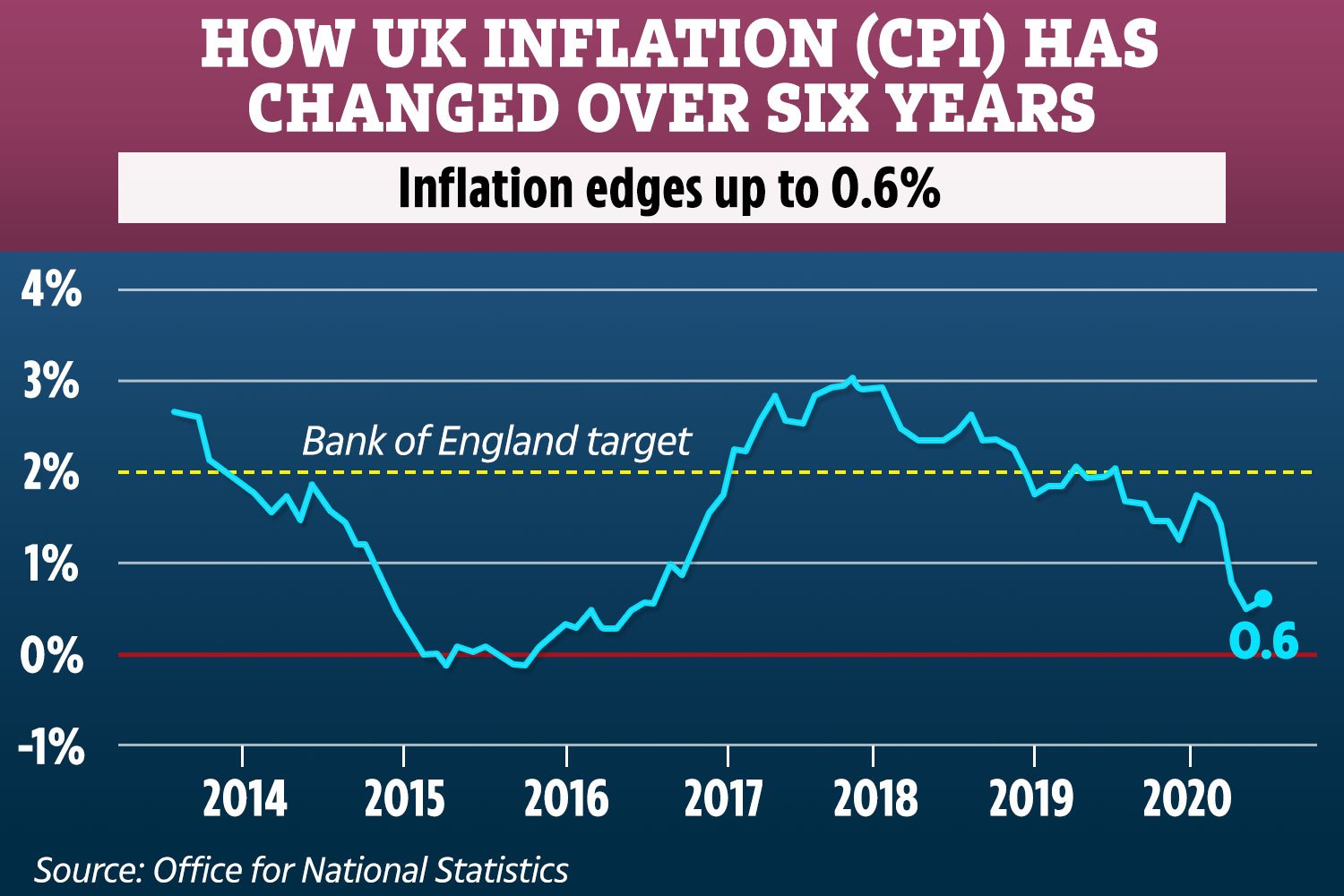 Although, the increase was partly offset by falling food and alcohol prices, the Office for National Statitistics (ONS) said.

The inflation rate for June was higher than the 0.5 per cent predicted by economists, yet it remains below the Bank of England's 2 per cent target.

The UK's inflation rate has fallen during the coronavirus crisis with May's 0.5 per cent rate representing the lowest level in four years.

Rising inflation means an increase in the general price level of goods and services, although the current level is still lower than usual.

What is inflation and how does it affect your money?

INFLATION affects how much everyday items cost, as well as wages and savings rates.

This means it can really impact families' bank balances.

Jeremy Thomson-Cook, chief economist at Equals, said the higher rate should be seen as a "positive sign" as it means consumer demand is recovering.

Inflation, which is measured by the Office for National Statistics, is also what the Bank of England uses as a guide for when it is setting interest rates.

This means inflation can also have a direct impact on mortgage costs and savings rates, as well as paying back debt.

Low inflation is positive for savers because the interest paid on savings is more than the increase in the cost of goods.

At the moment, there is more chance our savings aren't being eroded by inflation as the top rate for an easy access account is currently above inflation at 1.15 per cent.

For homeowners, if you're on a fixed-term rate then your repayments won't change because you're already locked in to a deal.

As inflation is directly linked to interest rates, you will only feel the effect when you come to renew.

Variable rate and tracker mortgages follow the base-rate and can go up or down at any time – so you'll likely pay less if inflation goes down.

But low inflation can also mean your debts get more expensive, as the amount you owe remains the same, yet you may find it harder to repay debts or the item, such as a car, if it depreciates in value compared to its initial worth.

At stable levels, a small amount of inflation is good because it boosts economic output and productivity as well as generates employment opportunities.

But out of control inflation can be disastrous for a country because the cost of essential goods and services can suddenly outstrip the buying power of people's wages.

Check out our inflation guide for more information.

Jonathan Athow, deputy national statistician at the ONS, said: "The inflation rate has increased for the first time this year, but remains low by historical standards.

"Due to the impact of the coronavirus, clothing prices have not followed the usual seasonal pattern this year, with the normal falls due to the start of the summer sales failing to materialise.

"Prices for computer games and consoles have risen, but food prices, particularly vegetables, have fallen."

Jeremy Thomson-Cook, chief economist at financial services firm Equals, said the slight increase in the inflation rate was "a positive sign", but added that the outlook remained "messy".

He said: "We can take a slight increase in headline inflation as a positive sign; demand recovering will increase inflationary pressures.

"But a look below the headline shows the outlook still remains very messy.

"Food prices are falling from lockdown levels, clothing demand is out of kilter with typical seasonal patterns, demand for entertainment during lockdown provided a pronounced bump in prices, and the ONS has only been able to log 84 per cent of the normal price quotes due to unavailability.

"For now however, inflation remains low, and both consumers and the Bank of England will be happy with that."

The UK economy grew by just 1.8 per cent in May as coronavirus lockdown restrictions were eased, dashing hopes of a V-shaped recovery.

Meanwhile, the Office for Budget Responsibility (OBR) yesterday predicted that unemployment levels are set to treble to 12 per cent as the furlough scheme comes to an end.

In May, we explained how to recession proof your finances as inflation plummeted and the Bank of England considered negative interest rates.