The biggest clash between the mining industry and federal government in more than a decade is brewing over a cap on fossil fuel prices after the Australian Energy Regulator confirmed rising coal prices are a key driver of soaring power bills, a claim the miners have fiercely denied.

Electricity prices are set to rise a further 30 per cent next year and the Albanese government is searching for a way to halt the price spike, prompting mining industry representatives to insist gas and renewable energy are to blame as it opposes the threat of market intervention. 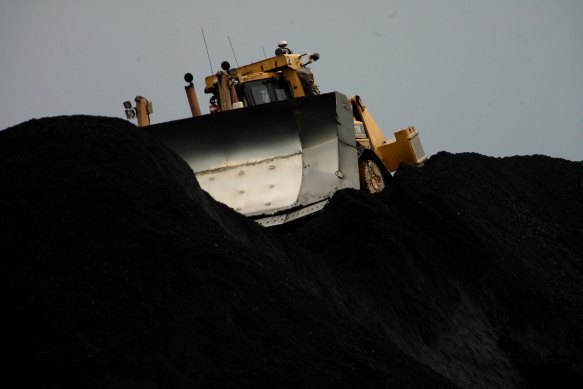 Power prices are forecast to rise again next year and coal miners say renewables and gas are to blame. Credit:Glenn Campbell

The Minerals Council, whose membership includes coal miners BHP, Glencore and Whitehaven, has said it will wage a multimillion-dollar advertising blitz against price caps on coal, akin to the resource sector’s $22 million campaign in 2010 that was credited with killing off the Rudd government’s proposed resources rent tax.

However, the Albanese government has been told by the federal Treasury that the unprecedented move of capping both coal and gas prices is a warranted measure to drive down electricity bills.

Minerals Council chief executive Tania Constable said earlier this month that “coal is not the problem here and it is misleading to suggest otherwise”.

Constable argued it wasn’t a shortage of coal or high prices internationally that sent prices soaring in June, and blamed mechanical failures at coal plants. The Minerals Council has argued that most coal plants buy their fuel under long-term contracts from mines that are dedicated to domestic supply and therefore their prices have not risen due to the international market.

But the Australian Energy Regulator, which oversees the east coast electricity market and is a statutory adviser to the federal government, has stated rising international demand and prices for Australian coal, which this year hit record highs above $US400 a tonne, can also have a significant impact on wholesale electricity prices.

The prices of coal and gas have soared due to a global energy crunch caused by Russia’s war on Ukraine and electricity bills will worsen in the next two years, the regulator said in its quarterly report this month.

The Australian Energy Regulator told this masthead it monitors coal market prices because they “impact electricity prices in the National Energy Market”.

It said one driver of power prices came when more coal than usual was bought on the spot market after domestic supply was reduced by wet weather. This meant soaring international coal prices were unusually influential in driving up wholesale prices.

Federal Treasurer Jim Chalmers has all but confirmed the government will cap the costs of gas and coal for domestic buyers.

The Albanese government is under pressure to relieve the pressure of energy costs on households and industry, following its election promise to revitalise manufacturing and cut power bills by $275 by 2025.

Chalmers said last week the government is reluctant to impose any new taxes on surging coal and gas profits and has said using the revenue such a levy would generate to subsidise power bills would drive inflation.

He confirmed the government’s preference is to impose new regulations on fossil fuel prices and said the government would announce its move before the end of the year.

Freshly re-elected Victorian Premier Dan Andrews told ABC’s Insiders on Sunday he was in discussions with Prime Minister Anthony Albanese about “a national gas reserve or some other mechanism to control prices”, which he argued was needed to combat energy prices.

The Australian Petroleum Production and Exploration Association chief executive Samantha McCulloch said Victoria is “outsourcing its energy security to Queensland and South Australia” and called on Andrews to encourage new gas fields to boost local supply to fill a gap in the market, which she said would occur as the state’s gas production fell 43 per cent over the next three years.