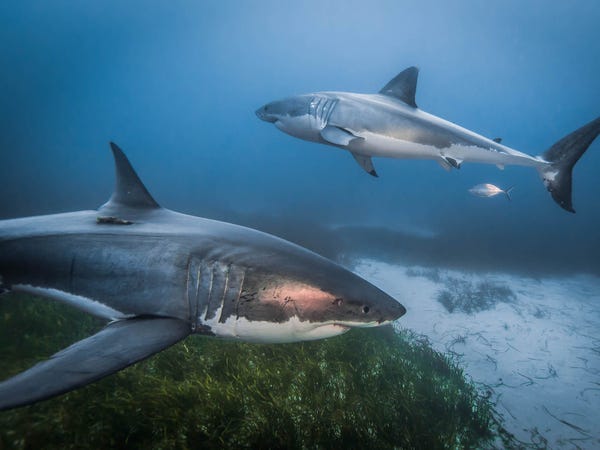 Members of a US Coast Guard crew said a shark came dangerously close to them while they were swimming this week.

On Wednesday, members of the Hawaii-based US Coast Guard Cutter Kimball wrote on Facebook that they decided to take a swimming break to help "break up the monotony" of their daily routine. The group said they "conducted safety briefs" and "set an armed shark watch," among other safety measures, before heading out to sea.

"Everyone was smiling and having fun. It was perfect!" members of the crew, stationed in Honolulu, wrote on Facebook. "And then Bridge personnel reported 'Shark!' over the radio. As if right out of a Hollywood movie, a six to eight foot shark (no exaggeration) surfaced at the Rescue Door and was swimming toward 30 to 40 people in the water about 30 feet away."

According to the crew's Facebook post, the animal they encountered was either a Long-Fin Mako or a Pelagic Thresher shark, both of which the crew argued are "not something to mess with."

"Our animal-lover Chief who wants to save every animal she finds yelled 'Shoot it!'" the Facebook post continued, crediting Maritime Enforcement Specialist 1st Class Samuel Cintron with scaring the shark away.

"We kept directing people out of the water while keeping a clear line of sight on the shark," the crew wrote. "ME1 [maritime enforcement specialist 1st class] fired bursts as needed to keep the shark from his shipmates with amazing accuracy. The shark would wave off with each burst but kept coming back toward our shipmates."

Luckily for the Coast Guardsmen, almost all crew members — and their inflatable unicorn — made it back to their ship without injuries. One member, however, did receive a small scratch during the incident.

"The only injury was a small scrape OS3 [operations specialist petty officer 3rd class] Berk suffered while climbing aboard," the Facebook post said. "Our hyper-vigilant HSC [health services technician chief petty officer] didn't even deem it worth a Band-Aid. But where was it located you ask? On his knee — in the center of a tattoo. What tattoo you ask? An open set of shark's teeth."

The Coast Guard crew said on Facebook that it believed the shark was not injured, and its goal was to keep the animal "away from shipmates" and "not harm it if possible." The post also added that the shark "later joined a few smaller buddies that showed up and they swam off together."

Members of the US Coast Guard Cutter Kimball requested to watch "Jaws" and "Sharknado" that night, according to their Facebook post, and described the encounter as a "sea story each of us will be retelling for YEARS."

Representatives for the US Coast Guard Cutter Kimball did not immediately respond to Insider's request for comment.