The shaking Zoom frame, titled “Mark’s iPhone”, a reminder “Bill” is the British comedian, actor and musician’s professional name, hints his out-of-shot distraction is worsening. With brow creased and eyes widening, Bailey is a picture of comic befuddlement until, hands raised in celebration, he stops. 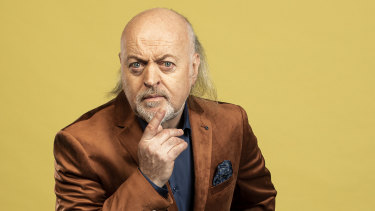 Bill Bailey will return to Australia in 2022.Credit:SBS

“Right,” he says, turning on the sound. “It’s just me here in my production office. I went to get some paper from the printer and it started whirring to life. It started doing things, making noises. It’s got a mind of its own. I’m slightly scared of it.”

Bailey, known for his quicksilver wit, gifted musicianship, passionate curiosity and broad intelligence, is more positive about Zoom calls. They are best one-on-one, though.

“The big, multi-screen ones, people get bored and drift off,” he says. “I have to check my face the whole time. Am I looking interested? Am I looking engaged? Occasionally, you get a glimpse of yourself and it’s almost like you’ve had a stroke or something.”

When faces freeze and voices dislocate because of stuttering technology and intermittent Wi-Fi triggers, Bailey sees an allegory for recent times. “It’s like the picture paused in 2020, but the sound carried on, and we’ve been out of sync ever since,” he says. “It’s a great visual metaphor for what’s been happening.”

Then people go, “It’s like Nazi Germany, these lockdowns”. Yes, because that’s what the Nazis are known for, isn’t it? Mild inconvenience.”

The pandemic has affected Bailey’s life in different ways. His En Route to Normal tour to Australia, named before COVID-19 redefined what regular life entailed, is rescheduled for 2022. The seventh live show he has brought to Australia, it traces chaotic moments in history to ask how we got here, who we really are and how resilience and the ability to endure got us through times of strife.

“There will be a whole list of the good things that came from the Black Death, for example, which was pretty bad,” he says. “Also, how bird song has affected composers in the past. We’re been hearing all kinds of birds we’ve never heard before because of the quiet of lockdown. The composer Anton Bruckner, who lived out in the countryside, incorporated bird song into one of his symphonies. It was a less industrialised time, quieter, and I thought, that’s just extraordinary. I have an affinity now with something that happened in the late 19th century as a result of this lack of ambient sound.”

“The origins of the word normal come from the Latin normalis, which meant a right angle,” he says. “It was a carpentry term. It was just a practical term to keep things at 90 degrees, to show you’ve ‘got a normal’.

“With the benefit of hindsight though, I would put a question mark at the end of the title.”

He doesn’t feel conversations about what is normal, about the pandemic’s long-term effect on people and life, can end for a while.

“It does churn up the emotions,” he says. “We have three members of our family who died of COVID-19. All had health issues, but they were in care homes. And then you realise this is the other reality of it. The overcrowded hospitals at full tilt, health care workers at their wit’s end. Not enough equipment, not enough masks.

“Saying goodbye to relatives where the nurse is holding the iPad up. So, you’d say goodbye, the final goodbye to someone on a shaky iPad. That’s the tragedy of it. How do you even calibrate that anymore? You’re balancing all that with trying to sort of carry on. What is normal?

“That’s why I started to write this show. It started out as a reaction to the shock of what’s happened in Britain, what’s happened in America and generally around the world, the emboldening of populist strongmen in Hungary, in the Philippines.

“Now trying to find a way back to normal, it’s taking on a greater significance because, well, do we want that? Do we want to go back to that?”

In 2020 Bailey released a new book, Bill Bailey’s Remarkable Guide to Happiness, a collection of essays celebrating simplicity and clarity as a means to find joy. Months later, he won BBC TV’s 18th series of Strictly Come Dancing with dance partner Oti Mabuse, becoming the contest’s oldest ever winner. In August, he became the first British comic to play the main stage at the Royal Opera House in London.

Two weeks after this show, Bailey’s longtime friend, and fellow comic, Sean Lock died from cancer. The day his death was announced, an emotional Bailey held up his phone for a video call to talk about the devastating loss he felt.

“He was my dearest friend and we’ve known each other more than 30 years,” he said. “We’ve known he was ill for some time but, even so, it’s still a shock when the day comes. He was a brilliant comic, he was a wonderful man, a very kind and generous friend and I miss him greatly.”

Bailey has always expressed himself, and his passion for humanity, nature, animals and protecting the planet, with honesty and heart.

He remains furious about the UK government’s handling of the pandemic, calling it catastrophic and the reason cases raged throughout the country. “A criminally negligent government allowed this to happen,” he says. “The result is we’ve had the worst rate of deaths in Europe which is shocking really when you think we’re supposed to be a reasonably modern health service.”

Appalled by individual ministers’ negligence and lack of ethics, he’s amazed at the lack of cabinet resignations and widespread public outcry. 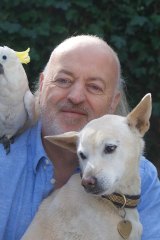 Bill Bailey has a passion for the natural world and his English home is a mini zoo.

“I think there’s a deeply held patriotic deference to an incumbent government in Britain. Almost like a unitarian, common sense of, ‘It’s a time of crisis, now’s not the time for politics. Now’s the time to get behind the government, no matter how criminally reckless they are’.”

He pinpoints Donald Trump’s presidency for lowering the bar of expectation for elected representatives, for eroding trust in media organisations and information channels.

“In my lifetime, I’ve never seen the like,” he says. “Government ministers blatantly lying, blatantly handing money over to their friends. Proper corruption. The kind of thing you would normally ascribe to tin-pot dictatorship somewhere. Not Britain. Not Blighty. This is happening here?

“There’s a kind of numbness to this behaviour. Like we’ve been bludgeoned into accepting it over the last few years from Trump and others.”

Maintaining the rage runs alongside Bailey’s lifelong passions for nature, exploring the world and rescuing animals. He and his wife, Kristin, became registered members of the British and Irish Association of Zookeepers and Aquariums, and their home is now a mini zoo of cockatoos, monkeys, chickens, snakes, chameleons, cats, geese and dogs.

A keen exponent of the outdoors, he is out birdwatching, hiking, mountain biking, paddle-boarding and observing flowers. Like his hero – explorer and forgotten co-discoverer of evolution by natural selection, Alfred Russel Wallace – he is a prolific drawer of scientific illustrations of butterflies, moths, bees, insects and birds.

He is also optimistic that, despite dire times, people have rediscovered their communal instincts.

“All those disaster movies about pandemics and viruses always ended up with the whole society unravelling and people ransacking everything and it all descends into anarchy. And the opposite is true. The opposite happens. People cleave together, people come together, people find ways to help others.

“This time in history has reminded us of how powerful those connections are. It’s shown how much we’re reliant on them, how much they sustain us, how much they connect us to the past and bind us together. Our connections have been strengthened.”

LIVE COMEDY IS BACK

Geraldine Hickey – What A Surprise The superlative dead-panner, agapanthus-remover and winner of the 2021 Melbourne International Comedy Festival’s Most Outstanding Show Award delivers encore performances of her trophy-winning work. December 7-9, Chapel off Chapel 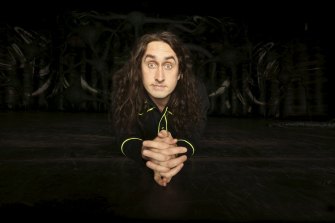 Ross Noble returns to the Australian stage in December.Credit:suppied

Master of improvisation, owner of thousands of obscure VHS cassettes, Noble returns to ponder getting a bean bag into an attic, the spirit in a spirit level and other off-the-cuff topics. December 11, Athenaeum Theatre; April 26-27, 2022, Glen Street Theatre; May 5, 2022, Sydney Coliseum Theatre, May 7, 2022, State Theatre, rossnoble.com

Wil Anderson – Watchu Talkin’ ’Bout Wil? A completely improvised night of comedy made up on the spot, with audiences’ help. May 8, 2022, Enmore Theatre, wilanderson.com