WA’s Solicitor General claims the Commonwealth’s involvement and then eleventh-hour withdrawal in Clive Palmer’s legal challenge to WA’s hard border has created “an egg that must now be unscrambled”.

During submissions in the Federal Court on Friday, Solicitor General Joshua Thomson SC made an application for the July trial to be vacated and a new trial granted without the Commonwealth’s evidence. 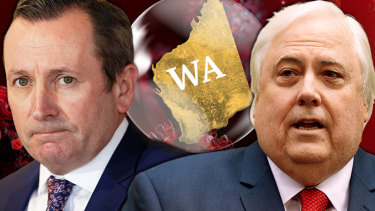 “It’s a most unusual situation where you have an intervention by somebody, in this case the Commonwealth, which in effect sends them to the field of battle, it goes in and has that battle and then seeks to withdraw from the field of battle,” he said.

“What you are left with is a mixed up trail of evidence.”

Mr Thomson himself is currently adhering to WA’s hard border policy, making his application via video-link from his home while in self-isolation.

At one point during his submissions he received a phone call from police checking up on his quarantine and referred to the situation as like being in prison.

Mr Palmer’s lawyer Peter Dunning argued the WA government “didn’t own” the witness evidence given by the Commonwealth in trial, and that it would be improper for the entire proceedings to fall over because one party had lost interest due to “political” pressures.

“It is one thing for the Prime Minister to agree with another leader for political reasons to abandon something, that arm of government is perfectly entitled to be engaged by those considerations, but it is quite inappropriate for a Federal Court to do so,” he said.

“It doesn’t mean the proceedings collapse if there are still main parties interested in the outcome.

“What brings proceedings to an end is if there ceases to be a genuine contest.”

Mr Dunning said the witnesses in the trial were the “court’s witnesses” and could be recalled or subpoenaed in a retrial by Mr Palmer if required.

The Commonwealth intervened in Mr Palmer’s legal bid to have WA’s hard border torn down and in effect became a “co-plaintiff”, with both parties claiming the state’s all-or-nothing approach to reopening was unconstitutional.

Mr Thomson said that due to the nature of the combined expert witness evidence being heard throughout the trial, the entire proceedings ought to be disregarded as they disadvantaged the state.

Commonwealth Solicitor General Stephen Donaghue QC said since the Commonwealth withdrew its interest the day after the trial, it was not appropriate it make any further submissions on whether or not the evidence it adduced be considered in the High Court.

It follows comments made by Prime Minister Scott Morrison on Radio 6PR on Thursday that his government wished the legal action had never been brought in the first place.

"We've got no issue with [the proceedings] being redone or restarted … we don't have any objection to that."

During the hearing, Judge Darryl Rangiah blasted Mr Donaghue after the Federal Court became aware of its withdrawal from the case through the media, with an application to the court not made for a further three days.

“Was it more important to notify the media before this court?” he asked, arguing Friday’s case management hearing should have been listed for Monday given the urgent nature of the application.

Mr Dunning said there was no authority for the Federal Court to disregard the Commonwealth’s evidence.

“Submissions you should disregard part of that evidence are wrong, it would turn it into a game, it would diminish the whole process,” he said.

He said while the Commonwealth was abandoning its reliance on its evidence, Mr Palmer's case still relied on it and that the court must consider the matter based on "the best available evidence".

Judge Rangiah said his task was to determine what the status of the Commonwealth’s evidence was now that it had withdrawn, and that he was not concerned with the reasons for its withdrawal.

There was some legal argument about whether the Commonwealth was technically considered a 'party' to the action, or an intervener. If a party, it would need to seek leave to withdraw from proceedings.

Mr Dunning argued if a party wanted to end proceedings, the application would have to be made in the High Court, not the Federal Court.

Judge Rangiah has reserved his decision on the application.

The Commonwealth has agreed to pay the costs of the hearing.

Following the four-day hearing between Mr Palmer and the State of Western Australia in July, the Federal Court adjourned to determine the facts of the case.

The matter was then due to go to the High Court for determination of whether or not they were constitutional, which was touted to occur from September.