Accounting body CPA Australia says home builders that become insolvent due to external factors should be allowed to continue to trade to avoid setting off a domino effect throughout the industry.

But the Housing Industry Association says companies need help before they reach the insolvency stage. 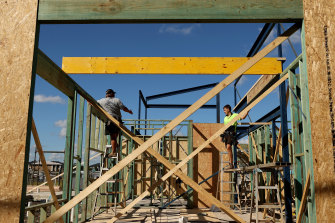 CPA Australia manager of insolvency policy Kristen Beadle said home builders were facing a “perfect storm” of higher costs, contracts with slim margins and long delays, and government assistance during the first two years of the COVID-19 pandemic might have kept some companies afloat that otherwise would have failed.

“So what that means is we’re going to have a raft of insolvencies coming through on those particular companies or small businesses,” Beadle said.

Given the unusual external pressures on the industry thanks in part to global supply chain issues, she said governments should be more pragmatic in their approach to regulation to reduce the knock-on effects for home buyers and other industry players such as subcontracted trades.

“You should be able to work with them to limit their licence such that they can complete current builds for the homeowners,” she said.

It was also important to keep some insurance in place or homeowners risked part of their build not being covered.

Several builders have collapsed this year, including Snowdon Developments, which went into administration earlier this month with 550 unfinished homes.

HIA chief executive Kristin Brookfield said there were currently fewer insolvencies in the industry but acknowledged it was facing major challenges.

“Everyone – builders, customers, banks, and governments – at this point in the cycle needs to be doing everything they can to keep builders trading, and trading solvently,” she said.

Builders, their customers and customers’ banks were doing everything they could to complete projects and get people into homes, Brookfield said.

But fixed-price contracts were proving to be an issue, particularly when build times were blowing out from nine months to 18 months in some cases due to labour and supply shortages.

CreditorWatch did not have comparable data on building insolvencies for this year and before the pandemic. Chief economist Anneke Thompson said there was a decline in insolvencies during the pandemic, in part thanks to greater “breathing space” during those two years.

“What this means is Australia now has a larger-than-usual number of companies that are probably close to insolvency,” she said.

“The changes to monetary policy, prices and consumer behaviour will all combine to build a sense of urgency for many companies who are in this position.”

But Brookfield said some supply shortages were starting to ease and customers who signed a contract for a new build today should be “reasonably confident” their builder had factored in potential cost increases down the track.

“We do think we might be kind of at the end of a part of this. I hesitate to say we’re there. But things very slowly seem to be turning a corner,” she said.