The Reserve Bank board is under pressure to end its super-sized interest rate hikes at its meeting on Tuesday as it faces growing fears its aggressive tightening of monetary policy will crush the property market and destabilise the economy in the face of strengthening global financial headwinds.

Amid signs that inflation pressures in the Australian economy are continuing to grow, the bank will debate whether to lift official interest rates to a nine-year high or start to slow down its rapid succession of rate rises. 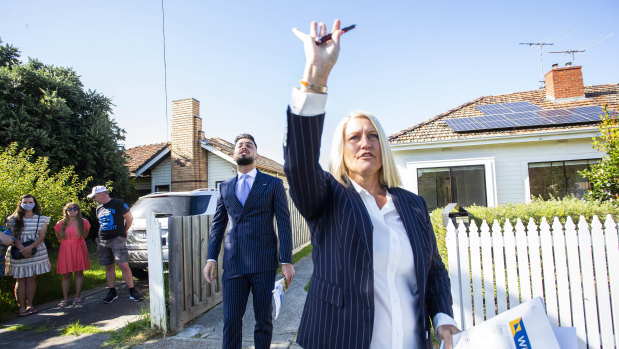 Property values are falling as the Reserve Bank tightens monetary policy and there are warnings they could drop even further.Credit:Meredith O’Shea

The bank has lifted the official cash rate, now at 2.35 per cent, at every one of its board meetings since May. It is the fastest increase in interest rates since the mid-1990s and includes four consecutive half percentage point hikes.

Another half percentage point lift would increase monthly repayments on a $750,000 mortgage by $222, and take the cumulative increase since May to $1140.

Independent economist Harley Dale said the bank was nearing the point where it could wind back its rate rises to a quarter percentage point, particularly with the growing turmoil in financial and economic circles.

“I think this particular meeting is the most important that they’ve had in this tightening cycle,” he said.

“There’s a lot of borrowers, and a lot of people in the housing market, riding on what happens over the next couple of months.”

The RBA has been lifting interest rates to slow inflation, which at a monthly level has reached its fastest pace since the 1990-91 recession.

The Melbourne Institute’s monthly measure of inflation, released on Monday, showed a 0.5 per cent lift in prices through September. Its measure of underlying inflation increased by 0.4 per cent, taking the annual rate up to 5.4 per cent.

The RBA seeks to keep inflation between 2 and 3 per cent.

At its September board meeting, RBA members discussed whether to lift interest rates by a quarter or half percentage point. The minutes showed the RBA is aware of the way interest rates take time to work through the economy and that it had “quite quickly” lifted rates over the previous four months.

Since the September meeting, interest rates on government debt have soared, almost every currency in the world has fallen in value against the American dollar and sharemarkets have shed value over growing fears of a global recession either late this year or in early 2023.

CoreLogic on Monday reported a further fall in house values, with Sydney values down by 9.2 per cent since January while they have edged down by 6.2 per cent in Melbourne.

Financial markets put the chance of another half percentage point rate increase at Tuesday’s meeting at 80 per cent, but economists are more mixed with some expecting the RBA to back a quarter percentage point lift.

The same markets have the cash rate reaching 4.1 per cent by the middle of next year.

“This would more than double average household interest payments and push total mortgage repayments to record highs relative to household income and drive a 30 per cent or so fall in prices,” he said.

Research by the National Housing Finance and Investment Corporation, to be released on Tuesday, suggests a further lift in interest rates will do little to quell inflation in the building sector.

The housing construction sector has been one of the key sources of inflation over the past 12 months.

High levels of construction activity and ongoing building and labour shortages have taken the annual inflation rate across the sector to an all-time high of 20.3 per cent. A year ago, the rate had fallen to just 1 per cent.

But the corporation’s research into the factors behind construction cost inflation shows 83 per cent of it is due to supply constraints. It noted this showed cost pressures would likely persist even if interest rates slowed demand for new housing.

By contrast, through the early stages of the pandemic, three-quarters of the cost inflation in building was due to strong demand from those wanting a new home or renovation work.

Over the past 12 months, the cost of plywood and steel reinforcement has increased by more than 25 per cent. Some structural timber products have gone up in price by more than 40 per cent.

The corporation’s head of research, Hugh Hartigan, said there were signs supply constraints were easing, which should reduce price pressures over months. But higher interest rates would create their own issues.

“Rapidly rising interest rates and the strongest building cost inflation in several decades are providing headwinds for the future supply pipeline, with building approvals now well off their highs,” he said.