DAN WOOTTON: I’ve always supported you, Sam Smith, but it’s time to accept this ‘gender neutral’ schtick has done serious damage to real women by locking female singers out of the Brit Awards in favour of blokes

There’s a little trick I play with my most woke friends and colleagues.

Engage in a conversation about Sam Smith and, within 90-seconds, even the most politically correct soul has referred to the flamboyant British singer as he or him.

Now, that makes perfect sense to me; Sam is a biological male who told me proudly in the early days of his career that he came out as gay as a precocious and confident 12-year-old, something I celebrated as a great advancement in our acceptance of homosexuality compared to when I was growing up.

But in this woke-dominated culture, even referring to Sam now by their birth sex is considered a great thought crime amongst the perpetually offended. 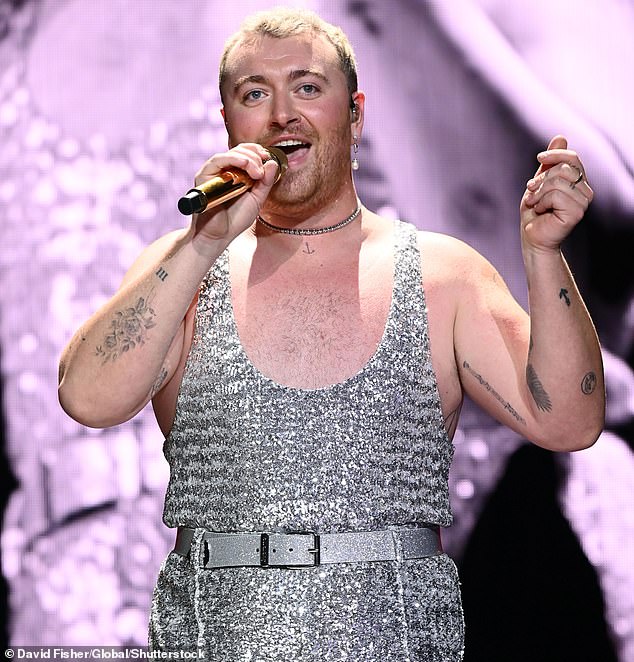 Engage in a conversation about Sam Smith and, within 90-seconds, even the most politically correct soul has referred to the flamboyant British singer as he or him 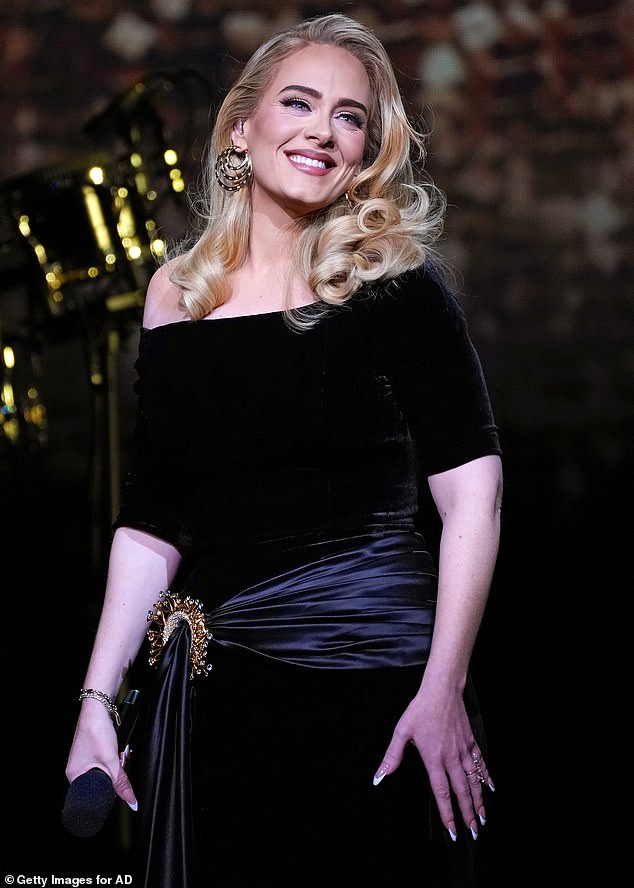 To prove the point, yesterday during a high-profile appearance on the US chat show of actress Drew Barrymore, Sam decided to make public a new theory that they are, in fact, Adele

Even though there’s no medical basis for his declaration, Sam, in the past couple of years, now identifies as non-binary and demands to be referred to as they/them.

Personally, I’m offended by such an affront to common sense, which also butchers the beautiful English language as we know it, but I’ll do my best in this column to stick to these ludicrous wishes because it doesn’t really cause any harm.

However, there is a far more sinister consequence of Sam’s gender neutral ultimatum.

Sulking about there being no non-binary category, Sam raged: ‘I look forward to a time where awards shows can be reflective of the society we live in. Let’s celebrate everybody, regardless of gender, race, age, ability, sexuality and class.’

And the woketopian bloke who ran the Brit Awards, Polydor Co-President Tom March, almost immediately caved to that hysteria by scrapping the iconic female artist prize, first won by Shirley Bassey in 1977.

I warned at the time that such a decision was going to be catastrophic for women singers, superstars Adele and Dua Lipa aside, who still struggle in what remains a male dominated music industry.

But such concerns were shrugged off because at least they had a solution to the Sam Smith problem.

Fourteen months later and the inevitable has occurred.

This year’s Artist of the Year category is a veritable sausage factory, with 100 per cent of the nominees (Harry Styles, George Ezra, Central Cee, Fred Again, and Stormzy) men.

There was no room for brilliant women like Florence and the Machine, Charli XCX, Emeli Sandé, Ella Henderson or Becky Hill. 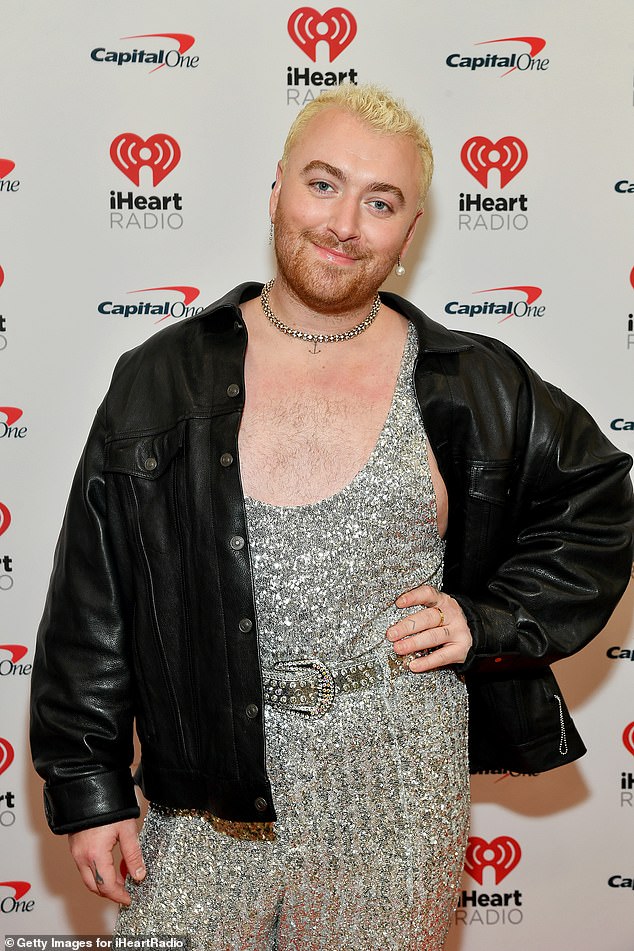 Sure, Sam, but what about all the young girls at home who will see not one of their own sex up for the biggest prize in music this year 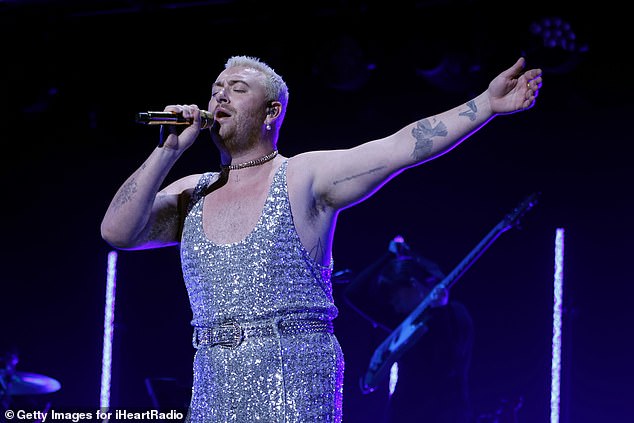 The Stay With Me singer’s career had been unfairly floundering – for what it’s worth, I think Sam is one of the most talented singer/songwriters of their generation – and the gender neutral controversy made their schtick cool again

Sam’s response now is to shrug off the scandal.

‘Things are moving forward, but it’s obvious it’s not there yet. From seeing that list, there is still a long way to go,’ the singer told The Sunday Times.

But what about any remorse for causing the female categories to be dropped altogether? Nope, nothing.

Instead, Sam added: ‘It’s incredibly frustrating. It feels like it should be easy to do. They just have to celebrate everyone because this is not just about artists getting awards. Awards are for kids watching on TV, thinking, “I can make music like this.”

‘When I was young, if I’d seen more queer people at these awards it would have lit my heart. Awards are there to inspire.’

Sure, Sam, but what about all the young girls at home who will see not one of their own sex up for the biggest prize in music this year.

That is an absolutely disgraceful situation, for which you seem to take no responsibility.

At least, Sam has been nominated for two awards, Best British Single and Best Pop/R&B act.

And, I hate to say it, but I believe there’s a hint of commercial cynicism behind Sam’s gender activism.

The Stay With Me singer’s career had been unfairly floundering – for what it’s worth, I think Sam is one of the most talented singer/songwriters of their generation – and the gender neutral controversy made their schtick cool again.

As a gay man, Sam was considered a bit boring; yesterday’s artists, you might say, with attention turning to the androgynous Styles.

But as a gender neutral boundary pusher, wearing crazy female clothing and showing off a Lizzo-style curvy figure, Sam has all of a sudden been embraced by the fickle fashion and music industry, scoring magazine covers and major US TV appearances as a woke warrior.

Sam seems to be enjoying the attention, too. 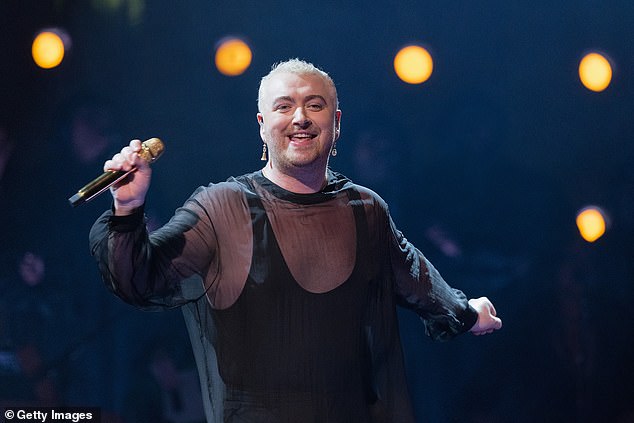 Despite Sam’s campaigning, The Mail on Sunday reported at the weekend that Brit Award bosses are considering re-introducing female categories

To prove the point, yesterday during a high-profile appearance on the US chat show of actress Drew Barrymore, Sam decided to make public a new theory that they are, in fact, Adele.

‘Everyone thinks I’m Adele. We’ve never been seen in the same room together. If you slow down her voice, it sounds a bit like mine,’ Sam claimed.

It’s highly unlikely Adele herself views this whole situation as a big joke.

In a clear riposte to the change while accepting the Artist of the Year award in 2022, she proclaimed on stage: ‘I really love being a woman and being a female artist. I do.’

There’s a reason why the bespoke female category existed because there’s been a long history of men dominating the Brits, with only two bands with female members (Five Star in 1987 and Little Mix in 2021) ever winning the British Group gong, for example.

Despite Sam’s campaigning, The Mail on Sunday reported at the weekend that Brit Award bosses are considering re-introducing female categories.

When they first announced their decision, I warned in a MailOnline column in November 2021: ‘We could end up in the nonsensical place where quotas have to be introduced to ensure there are enough female nominees, even though gender is no longer meant to matter.’

Sure enough, that’s just what leftie bedwetter Owen Jones is now calling for, despite seemingly being unable to define exactly what a woman is.

He tweeted: ‘My view is gender neutral awards should reserve 50 per cent of nominations for women. Women represent a majority of the music industry workforce, so the Academy making the nominations should also be weighted to be at least 50 per cent women, too.’

This is lunacy – the entertainment industry has lost its marbles.

And it’s not going to stop.

Just today, Cheryl Tweedy said that if the talent show X Factor were ever to return it would need to have a non-binary category and no longer separate the boys from the girls.

With other major awards ceremonies like the BAFTAs and Oscars tipped to follow the Brits lead, it’s time to ignore attention seeking biological blokes like Sam Smith and stop the war on women before it’s too late.