The Danish royal family have released a new portrait of Queen Margrethe with both her sons and their wives – following their royal title row.

It was a tumultuous autumn for the Danish Royal Family after the monarch stripped Marie and Joachim’s four children of their prince and princess titles – a move which he publicly spoke out against.

Prince Joachim publicly spoke out against his mother’s decision in the days that followed, while there were reports of a feud between Joachim and his brother Prince Frederik, over the decision.

Earlier today, the palace released two photographs of the family, including one which showed Frederik and his wife Mary with Joachim and his wife Marie standing around the Queen. 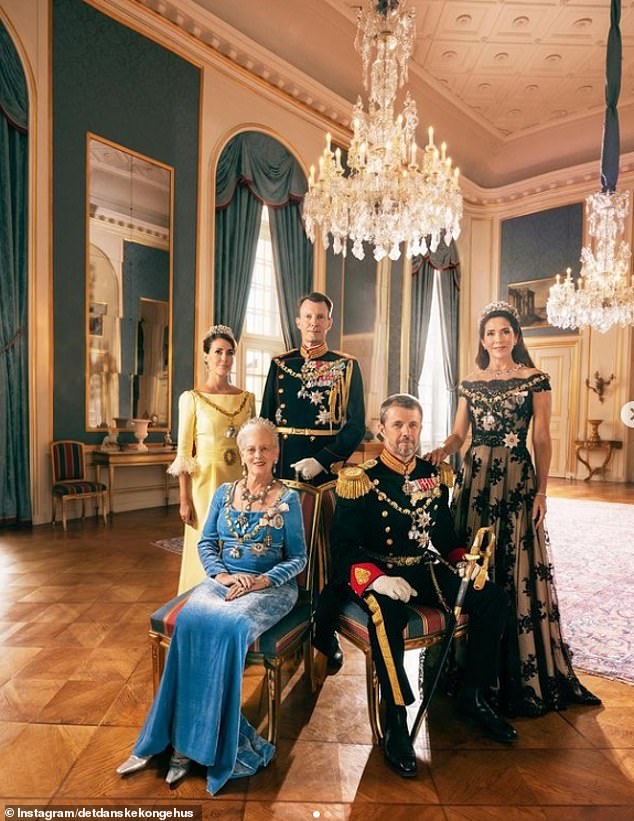 The photograph was undated, however it is believed to have been taken during the Queen’s Jubilee celebrations earlier this summer.

The caption for the snap read: ‘Throughout the year, Her Majesty The Queen’s 50th Anniversary of the Government has been marked with events in several parts of the country.

‘It is an old tradition that on special days in the Royal House, new portraits are published, and to conclude the anniversary year, two new gala portraits of the Queen and the royal family are published today.

‘The galla portraits are created by photo author Per Morten Abrahamsen in the knight hall of Christian IX’s Palace at Amalienborg. 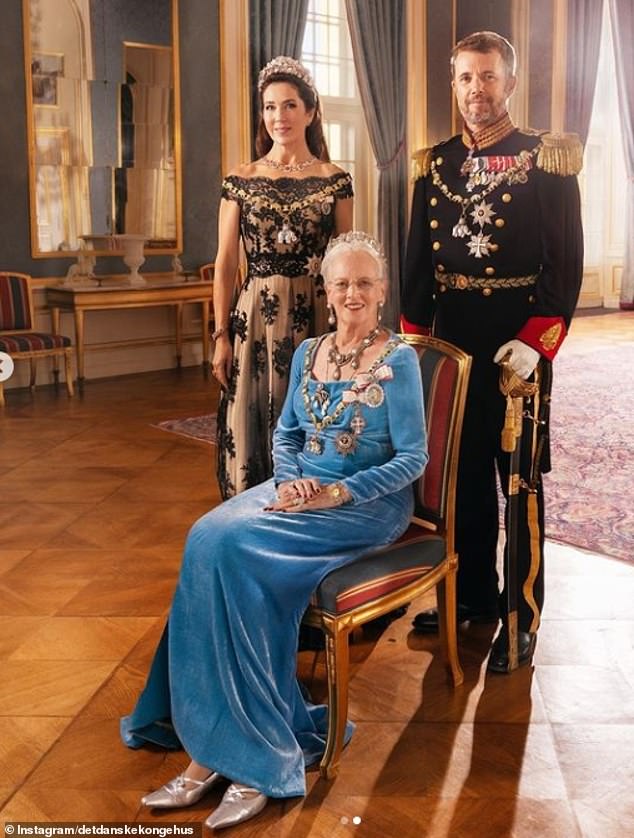 ‘Among other things, it is from this hall that the Queen and the royal family traditionally step out on the balcony on birthdays to receive the people’s congratulations from the palace square.’

The photograph was released after the two families spent the festive period seperately, following the royal titles row which has engulfed them this autumn.

Days ago,  Princess Marie spoke about how ‘lucky’ she feels to have ‘four children who love each other so much’.

She told Spanish newspaper El Pais: ‘I will always encourage [the children] to have each other for the rest of their lives…Seeing them united is very important to us as parents.’ 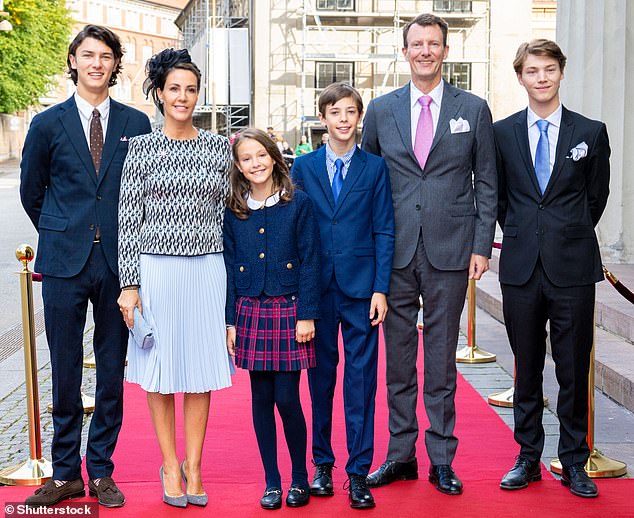 She explained: ‘For us, it is very important to be together and talk about everything, in confidence, as a family.’

In September, the Danish monarch announced that her grandchildren Nikolai, 23, Felix, 20, Henrik, 13, and Athena, 10, will no longer have ‘His/Her Highness’ titles from January 2023.

At the time, Margrethe insisted the move will be ‘good for them in their future’ and allow the children – who have maintained their positions in the line of succession –  to ‘shape their own lives without being limited by the special considerations and duties’ that a formal affiliation with the Danish Royal Family involves.

However, Prince Joachim publicly spoke out against his mother’s decision in the days that followed – claiming that his children had been ‘harmed’ in the process. 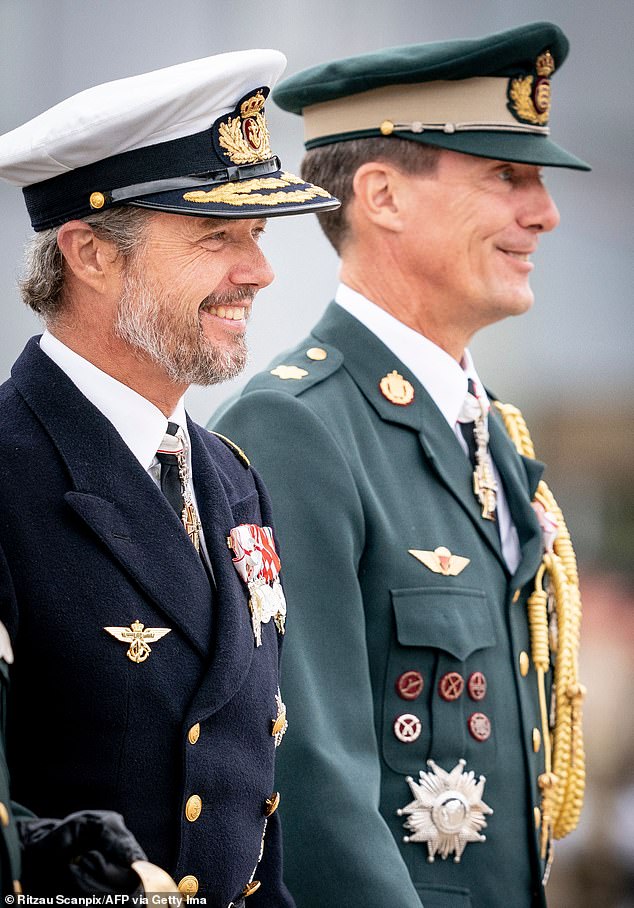 Prince Joachim publicly spoke out against his mother’s decision in the days that followed , while there were reports of a feud between Joachim and his brother Prince Frederik, over the decision

Months later, the sixth-in-line to the throne admitted that ‘communication was missing’ within the Royal Family in the lead-up to the shock announcement.

Joachim told local news outlet B.T.: ‘There is a lot to work on.  Communication was what was missing. Now we have met and we are on the right track.’

Shortly after his children were stripped of his titles, Joachim claimed that he had only been given five days’ notice before the news was made public.

Instead of being Princes and Princesses, they will be Counts and Countess and referred to as Their Excellencies. 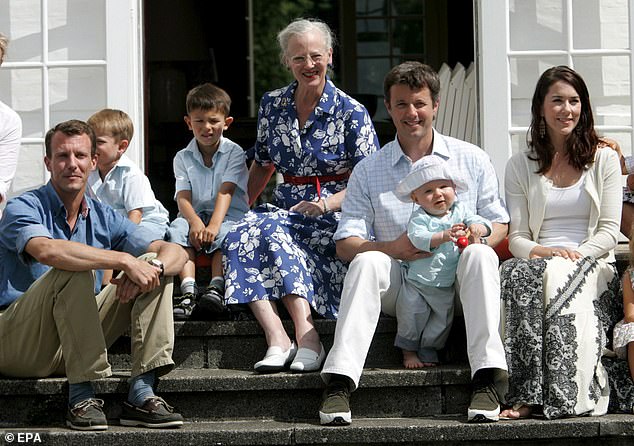 It was a tumultuous autumn for the Danish Royal Family after the monarch stripped Marie and Joachim’s four children of their prince and princess titles – a move which he publicly spoke out against (pictured, Prince Joachim with Queen Margarethe, Prince frederik and Crown Princess Mary)

Following her announcement, Joachim spoke to Danish publication Ekstra Bladet outside the Danish Embassy in Paris, where he lives with his French-born wife Princess Marie and his two youngest children, and said his four children had been ‘hurt’ by their grandmother’s decision.

‘I was given five days’ notice to tell them. In May, I was presented with a plan which, by and large, was that when the children each turned 25, it would happen. Now I had only five days to tell them. Athena turns 11 in January,’ he clarified

Meanwhile, his ex-wife Alexandra, 58, who was married to Joachim for 10 years until 2005, said that her sons, Nikolai and Felix, had been left feeling ‘ostracised’ from the institution and the decision had come like a ‘bolt out of the blue’.

The Royal Household released a further statement, saying: ‘As the Queen stated yesterday, the decision has been a long time coming. 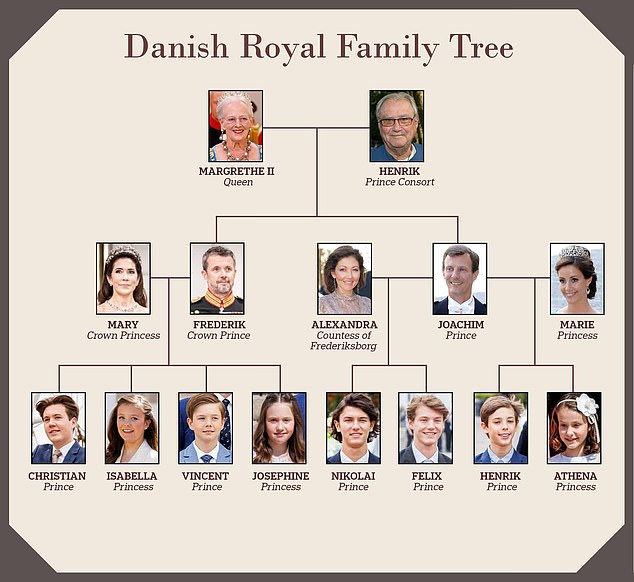 Out of a title: The four grandchildren who will no longer be TRHs

Nikolai of Denmark, 23: The Copenhagen Business School student and model regularly tops lists of the world’s most eligible bachelors. He lives in Denmark but has jetted around the world to walk for designers in Paris and London. Nikolai has also appeared on the cover of Vogue Scandinavia.

Felix of Denmark, 20: Following in his brother’s footsteps, Prince Felix has also had success as a model and has starred in an advertising campaign for Georg Jensen. He had a short stint at the Royal Danish Military Academy but quit after two months because it ‘wasn’t for him’.

Henrik, 13, and Athena, 10, of Denmark: The youngest of Prince Joachim’s four children, Henrik and Athena are the product of his second marriage to Princess Marie. They live with their parents in Paris.

‘We understand that there are many emotions at stake at the moment, but we hope that the Queen’s wish to future-proof the Royal Household will be respected.’

Earlier this year, it was said that Joachim and his family are relocating to the US after he landed a new job in the defence industry in Washington, according to local media reports.

The Danish royal, 53, has decided to move to Washington DC with his wife and their two young children, Henrik and Athena, Danish newspaper BT reported.

The royal couple are currently based in Paris, where the prince has worked as defence attaché since 2020. However that job is expected to come to an end in June, meaning they are likely to up sticks in the second half of the year.

Last week, Frederick and Mary blended in with the locals during a shopping excursion in Sydney’s beachside suburb of Bondi.

They were accompanied by their children Christian, 17, Isabella, 15, and twins Vincent and Josephine, 11, as well as Mary’s old friend Amber Petty.

Frederick and his wife, 50, both carefully guided their young children across a busy road, at times holding their hands or reaching out to slow them down.

Vincent popped into a local Orlebar Brown clothing boutique with his father, emerging carrying a paper shopping bag containing his latest purchase. Mary, meanwhile, was casually chic for the outing, donning a bright orange shirt that she wore knotted at the waist. 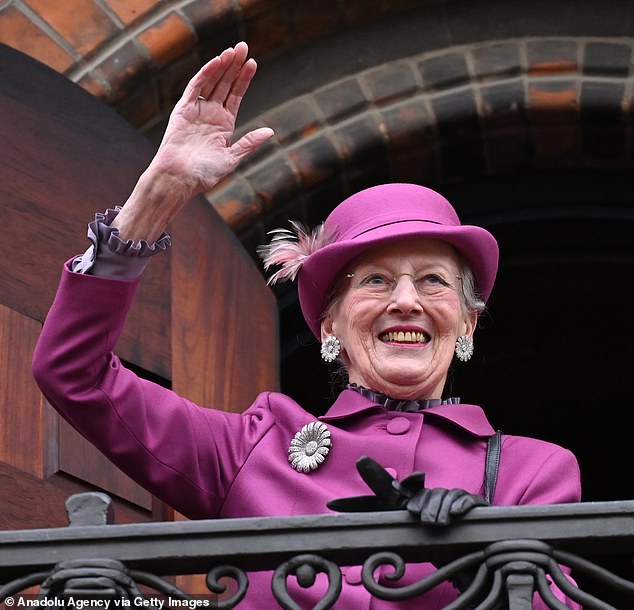 In September, Queen Margrethe II of Denmark. 82,  announced four of her grandchildren will no longer have His/Her Highness titles

Partially unbuttoned, it revealed a black bodysuit underneath, and she added a pair of loose black slacks to the ensemble.

The Australian native also included a pair of light brown flat sandals as part of her look and wore designer sunglasses.  She had her hair pulled back off her face for the occasion, and appeared to have on minimal makeup.

Frederick dressed down in a simple white polo shirt and blue jeans, along with a white cap.  He also had on sunglasses for what was a sunny Sydney day, and finished the look with beige and white Nike sneakers.

The children appear to have inherited their mother’s keen eye for fashion, with Josephine donning a trendy American flag jumper and white shorts. 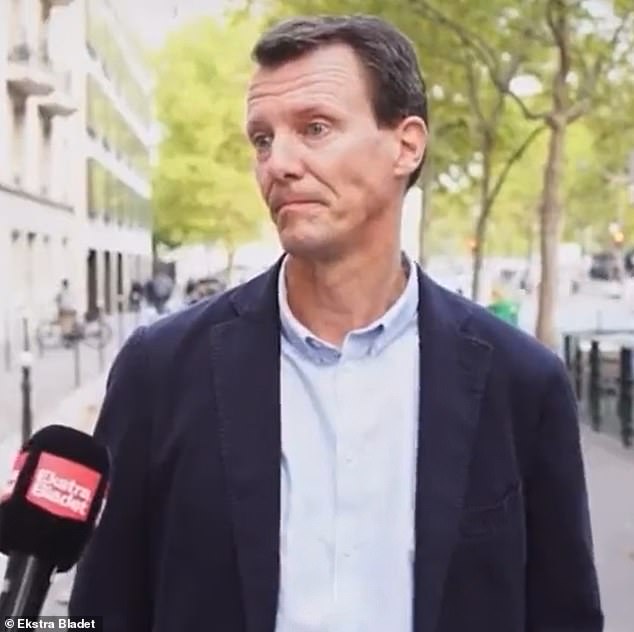 Her twin bother Vincent, who picked up a few items during the trip, wore a khaki shirt with a yellow hand print on the front with navy shorts. Elsewhere, teenager Isabella kept cosy in a navy blue jumper paired with grey shorts.

After strolling through Bondi and doing some shopping, the family headed out to lunch together.

Hobart-born Princess Mary is believed to have spent the holidays with her Tasmanian family, the Danish royal household confirmed in February.

It’s the first time in five years the whole family are visiting Australia together. However, Mary made a solo getaway to Melbourne last year.