The story sounded nuts. This was more than five years ago, when Eric Mennel, a New York podcast producer, was talking to his friend and neighbour. She told him about a guy her father knew. His name was Matthew MaGill, a cranky, eccentric loner who died in the woods on the Florida-Georgia border. He was a former plant nursery owner who was destitute but had told tall tales about his past – he was once married to a famous Broadway and TV actress, he had been a racing car driver, he had retraced the path of Lawrence Of Arabia on a camel.

Mennel’s friend’s father had a box of the guy’s writings and mementos. Would Mennel like to see it? Of course he would. The result is the podcast Stay Away From Matthew MaGill.

“One of my fatal flaws as an audio producer is that I want to believe everything,” says Mennel, from his home in Prospect Heights, Brooklyn. “I can look into something for weeks or months or even years and it mightn’t pan out. It was like that with this story for a while. The raw material made me think there was something there, but I didn’t know exactly what it was. The story changed a lot over the five years I made it.”

That’s an understatement. The more Mennel dug into the contents of the box, the more bizarre the story became. For a start, Matthew MaGill turned out to be a pseudonym. His real name was Dorr Watkins, and he changed his identity because he was sure the FBI were after him following his involvement in importing stolen luxury cars to the US. 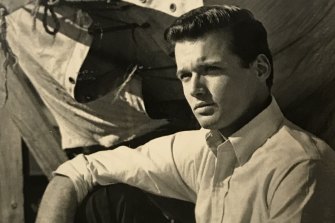 Matthew MaGill’s real name was Dorr Watkins and he changed his name to evade the FBI.

And the famous actress he was supposedly married to? Totally true. Mennel tracked down Jenny O’Hara, a sassy 79-year-old who starred on Broadway in the ’60s and ’70s and in TV series such as My Sister Sam, The King Of Queens, The Mindy Project and Transparent.

She told Mennel about her marriage to the strikingly handsome Watkins, his jealousy over her career, his controlling behaviour … and the fact they owned a monkey that lived with them in their New York apartment.

As Mennel followed the leads left in the box, more strange details emerged, such as the fact Watkins’ father, who was a commercial airline pilot, was hijacked at gunpoint and forced to fly to Cuba in 1970, eventually safely returning all passengers to the US after talking to Fidel Castro on the tarmac. 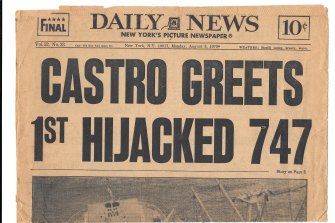 How the Daily News covered the hijacking story.

But the story took on a much more personal twist after Mennel visited one of Watkins’ brothers in San Francisco to interview him and give him the box. Mennel got a pang of regret as he saw Richard’s family and how warmly they interacted with each other. As he got to the elevator to leave, Richard rushed out to the hallway to thank him and said, “it’s all about family.”

Mennel’s family had become fractured. His parents were divorced, he had stopped speaking to his mother, his brother was emotionally closed off and his sister complained that he had interviewed everyone in the family over the years apart from her.

Mennel decided to get them together in the summer of 2019 and ask the hard questions. To reveal what happens in the podcast would give away spoilers, but each family member reveals hidden secrets and festering grievances that had built walls between them.

“The microphone gives you permission to ask things you wouldn’t normally be allowed to ask,” says Mennel. “Also, I think everybody was finally ready to talk because they’d been bottling up that stuff for a long time.” 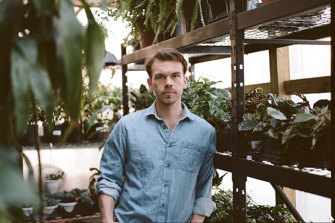 Podcaster Eric Mennel’s family dynamic has completely changed as a result of his discoveries.

The family dynamic has completely changed as a result of the podcast.

“We’re all more in touch with each other now,” Mennel said. “I can now talk about my mental health issues with my mum, which we never could before. My relationship with my brother has changed immensely since having the conversation in the podcast. And my sister and I are now supports for each other. My dad talks about this dividing line in our family, pre-summer 2019 and post-summer 2019. It’s not perfect, but it’s so much better.”

In a way, it’s all due to a destitute loner in Florida called Matthew MaGill and his Pandora’s box of secrets that was just waiting to be opened.

THE WATCHLIST
Find out the next TV, streaming series and movies to add to your must-sees. Get The Watchlist delivered every Thursday.