A surge in new car sales and an increase in dining and drinking out helped drive economic growth to nearly 6 per cent over the last 12 months, but the Treasurer warned that strength will not last in the months ahead.

The economy expanded by 0.6 per cent over the three months to September and by 5.9 per cent through the year, according to Australian Bureau of Statistics data, slightly lower than expectations. 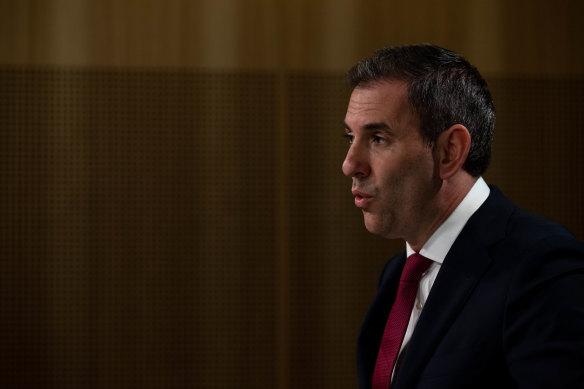 Treasurer Jim Chalmers said the growth was welcome, but there were tough times ahead.Credit:Janie Barrett

Treasurer Jim Chalmers said while there were some pleasing figures in the national accounts data, it was backwards-looking and much has happened in the months since the data was captured.

“This paints a picture of an economy which is relatively robust, despite the substantial challenges being thrown at it from around the world,” he said.

“This is a robust result in the face of pretty serious headwinds coming at us from around the world, as well as the considerable and compounding cost of living pressures on Australian households and businesses.”

Wages and salaries grew by 3.2 per cent over the three months to September, the strongest growth since 2006 as businesses compete to attract staff in the tight labour market.

But spending outpaced growth in wages, with inflation – currently at 6.9 per cent – eating into incomes. The household saving ratio fell for the fourth quarter in a row as a result, from 8.3 per cent to 6.9 per cent.

Chalmers said a lot has happened in the months since the data was captured, including three more interest rate hikes. Economic growth is forecast to reach 3.25 per cent in the 2022-23 financial year, and slow to just 1.5 per cent in 2023-24.

“We’ve also seen flooding, and natural disasters which will hit food prices and agricultural exports in the coming months, and the coming quarters, and that’s a significant factor,” he said.

Ongoing global economic challenges including the war in Ukraine and the surge in COVID cases in China will also affect Australia’s economic growth, the treasurer said.

“We think these sorts of factors, global and domestic, will increasingly weigh on Australia’s economic growth over the next year,” he said.

Sean Langcake, head of macroeconomic forecasting at BIS Oxford Economics, said spending momentum has slowed and inflation and higher interest rates will slow it further in 2023, and noted the fall in the savings rate.

“The rate is still a little higher than it was pre-pandemic. But the scope for consumers to fund growth in consumption from savings is dwindling quickly,” he said.

“With inflation-adjusted wages at an 11-year low, many households will have to make tough decisions around their spending habits. The type of spending that we’ve seen during the pandemic recovery may no longer be viable for many households.”

Price pressures have continued to build. The GDP measure of inflation, which is broader than the consumer price index, rose 1.8 per cent. That’s the largest increase since the introduction of the GST more than 20 years ago. The ABS said the figure reflected sustained demand and high costs through supply chains.

State economic growth varied. Victoria recorded no change as a 1.3 per cent increase in household spending was offset by a decrease in government health-related spending, including a reduction in spending on rapid antigen tests.

The NSW economy grew by 0.7 per cent, again driven by household spending on cafes, restaurants and cars.

Queensland and Western Australia recorded quarterly growth of 0.7 per cent and 0.6 per cent respectively, while the Northern Territory recorded the largest jump of 2.7 per cent, driven by government spending.