Depending on who you ask, it’s early in the morning when Dolly Alderton and I log on for a Zoom chat. We’ve agreed to an 8.30am call time, and it’s around 8.37am when Alderton’s cheery face suddenly appears on my computer screen.

“Good morning. Wow, it’s super early,” she says before catching herself. “Well, it’s not super early for people who get up early or people with young children, but it is for a single, 33-year-old woman.” 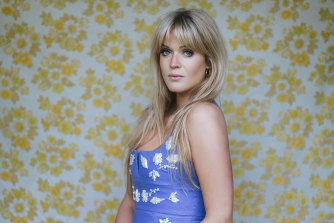 Her best selling memoir, Everything I Know About Love, turned Dolly Alderton into a household name.Credit:Alexandra Cameron

Admittedly, for someone who is not a morning person, Alderton looks remarkably fresh. Which is doubly impressive given she had a terrible sleep. “I’m not sleeping well. Today is the day all the reviews come out, so I had a series of fever dreams that were so vivid,” she explains.

The “reviews” are for Everything I Know About Love, the TV series based on Alderton’s best-selling 2018 memoir. Produced by the same Midas-touch team that brought us Bridget Jones’ Diary and Love Actually, the coming-of-age series (airing here on Stan) is set in 2012 and stars Emma Appleton as Maggie, Bel Powley as Birdy, Marli Siu as Nell and Aliyah Odoffin as Amara, four best friends in their early twenties who live in a London share house.

Long before the series finished filming, it was plastered across several “most anticipated TV shows of 2022” lists. So yes, expectations are high and giving Alderton literal nightmares.

“Last night, I dreamt that the series got zero-star reviews from all the critics, made history as the worst TV show ever made, and the Queen even mentioned it in her Platinum Jubilee speech,” laughs Alderton. “Then I went to my publicists’ house, we got a private jet and had cocktails in the Maldives to commiserate. So, that was my nightmare.”

The fact Alderton still wakes up in a cold sweat worrying about work is refreshing, even if her night terrors involve private jets, the Maldives and the Queen knowing who she is. Alderton has been on something of a tear for the past few years, finding professional success mined from her private life.

Between 2015 and 2017, Alderton wrote a weekly dating column for the British newspaper The Sunday Times, allowing her to flex her two most potent weapons: humour and heart.

While the column mainly focused on Alderton’s dating life, she often addressed the millennial experience as a whole. Columns like ‘Dolly Alderton on Why She’s Obsessed with Pattern Horoscope App’ or ‘Dolly Alderton on Overcoming FOMO’ proved she had her finger on the pulse.

In 2017, she co-created the podcast The High Low alongside writer, and best friend, Pandora Sykes. Billing itself as a podcast that covers “highbrow and lowbrow culture”, The High Low was wonderfully unpretentious, only serving to bolster Alderton’s reputation as the internet version of a funny best friend.

Together, Alderton and Sykes were just as comfortable dissecting the Met Gala as they were diving into the grief of miscarriage, and made no apologies for their wide-ranging subject matter. In just over 150 episodes, The High Low regularly topped podcast charts in the UK and was downloaded more than 30 million times.

By the time Alderton released Everything I Know About Love in 2018, she had cemented her reputation as a figure millennials could connect with. Naturally, the book was a bestseller, chronicling the rollercoaster that is your twenties: sex, drugs, share house life, and the addictive romances that make it all worthwhile. Most importantly, though, it was a love letter to friendship.

Before the book came out it was optioned as a series, which brings us to Everything I Know About Love, the TV show. Like the book, the series is rooted in the familiar: disappointing dates, unfulfilling jobs, and the never-ending search for what matters most in life.

It’s another extension of the Alderton brand, relatable and heartfelt, but as her following expands and more people engage with her work, the 33-year-old is wary of being painted as an everywoman. “I have a really complicated relationship with the word ‘relatable’,” she says. “Being called ‘relatable’ is an honour, to feel your writing carries truth for people, or that they identify with it.

“But it’s never a description I would give myself because there are lots of ways I am incredibly unrelatable. I’m middle class, privately educated, white, able-bodied, and I am financially independent without a partner… I am aware that I move through the world in a way that is comparatively very easy to a lot of people.”

Ironically, while Alderton prepares for the intimacies of her twenties to hit the small screen, at 33 she feels a desire to share less of herself in her work. “I am constantly self-protective in a way that I wasn’t before; I am aware now of how much I want to give away. I don’t want to be overexposed,” she says.

“Initially, I had such a small following that I wrote about everything, and there was no gatekeeping required, which was liberating. But I don’t think it is bad to get a bit older and be slightly warier about what you’re putting out into the public.”

This is perhaps why the TV version of Everything I Know About Love is described as “loosely based” on the memoir, rather than a straight-up page-to-screen adaptation. Maggie is the character based on Dolly and shares a bit in common with Alderton of a decade ago, including a Top Shop wardrobe and a love of cigarettes. 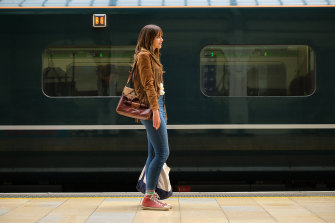 Emma Appleton plays a “more confident and forthright” version of Dolly Alderton in Everything I Know About Love.Credit:Stan

But according to Alderton, who acts as executive producer and writer, the similarities end there.

“Emma Appleton is much hotter than I am. When you’re adapting something from your real life, it’s your right to cast someone ten times funnier and hotter than you are,” she says. “Maggie is also a lot more forthright than I am; she often has the right thing to say, whereas I still think of my best comebacks on the bus ride home.”

While Alderton may have kept a degree of distance between herself and the show, the series contains moments ripped from her life. And while writing about your embarrassments might be cathartic, I imagine watching actors recreate them would be, mortifying?

“Yes, mortifying is how I would describe it,” laughs Alderton. “In episode three, Maggie tells a boy she’s dating that she loves him for the first time and he laughs in her face, which is word for word something that happened to me in 2012, so that was brutal to relive.

“China Moo-Young (the director) and I had our jumpers over our faces during shooting because I honestly just couldn’t engage with that scene, it was too excruciating.”

Unanswered declarations of love aside, making Everything I Know About Love as a 33-year-old allowed Alderton to appreciate how much has changed in the last ten years.

“The overwhelming feeling I have at the start of my early 30s compared to my early 20s is that I’ve started prioritising my own comfort,” she says. “For starters, I own a proper adult vacuum now, a Hoover with actual bags that I regularly change.

“But also, I’m making better decisions. For instance, the guy I am with right now is a bit younger than me and this past weekend was the Queen’s Platinum Jubilee. He kept talking about having a four-day rager, but because I knew I couldn’t deal with a week-long hangover, I booked a movie at 6pm on Saturday to avoid going out.”

Owning a Hoover and ducking a hangover might be the most Alderton way of defining progress, but as anyone in their mid-30s will tell you, that counts. Luckily, for those who enjoy Alderton’s musings on matters of the heart, she admits, on that front, there is still a way to go.

“I’ve learned it doesn’t matter how much I investigate love and relationships on the page, that will not protect me from my own heart. It still has a will of its own, and that heart will make terrible decisions, but that’s part of being a human, isn’t it?”

Sounds pretty relatable to me.

Everything I Know About Love is now streaming on Stan, which is owned by Nine, the owner of this masthead.

To read more from Spectrum, visit our page here.