The Sydney and Victorian lockdowns aimed at stopping the spread of the Delta strain of coronavirus could cost the country $10 billion, with new private-sector forecasts that the outbreak will derail the national economic recovery.

KPMG estimates up to 1.5 percentage points will be stripped from growth in the September quarter based on shutdowns of 40 days across Greater Sydney and 10 days in Victoria, with the cost being borne largely by private businesses and privately employed workers. 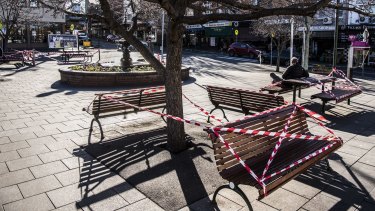 KPMG estimates the lockdown in Sydney will cost about $220 million a day while in Victoria the cost will be closer to $150 million a day.Credit:Steven Siewert

Through the first six months of 2020, Australia recorded its deepest recession since the 1930s as restrictions hit the economy during the first wave of the coronavirus pandemic. Since then, however, it has bounced back strongly while the jobless rate has fallen below 5 per cent.

Even Victoria’s lockdown through much of the second half of last year failed to impede the recovery, with the nation’s economy to the end of March almost 9 per cent bigger since the middle of last year.

But KPMG chief economist Brendan Rynne said the lockdowns across Sydney and Victoria would hit the economy, which was not getting the same sort of government support as during the depths of the pandemic.

The absence of major support such as the $90 billion JobKeeper wage subsidy scheme, which cost the government bottom line but helped maintain private-sector profits and wages, meant the new lockdowns would have a different impact on the economy.

“The shift this time is that it’s going to be much more felt in the private sector, in profits and wages, than in the public sector,” he said. “At the individual level, there are people who are going to be worse off after lockdown who were better off before it started.”

The economy grew by 1.8 per cent in the March quarter.

The current lockdowns will have their largest impact on the September quarter, which KPMG had been forecasting to show growth of 1 per cent. Instead, it thinks the quarter will show negative growth of 0.5 per cent.

Treasurer Josh Frydenberg has admitted the lockdowns will hit the economy, arguing it could delay investment decisions by businesses and affect supply chains across the country.

But the hit to growth may not filter through to the jobs market.

ANZ senior economist Catherine Birch said although the economy would slow because of the lockdowns, employers would continue to “hoard” workers given current difficulties securing staff.

She estimates NSW alone will lose between 50,000 and 60,000 jobs across July and August because of the lockdown, with retail and construction to take the biggest hits. But once the lockdown ends, employers are expected to move quickly to put staff back on their payrolls.

“Labour hoarding will be a common approach by businesses to avoid the costs and delays of rehiring once restrictions ease, particularly given reported difficulty finding labour and the record high job vacancy rate,” she said.

ANZ believes the national jobless rate, which hit 4.9 per cent in June, will be down to 4.4 per cent by the end of the year.