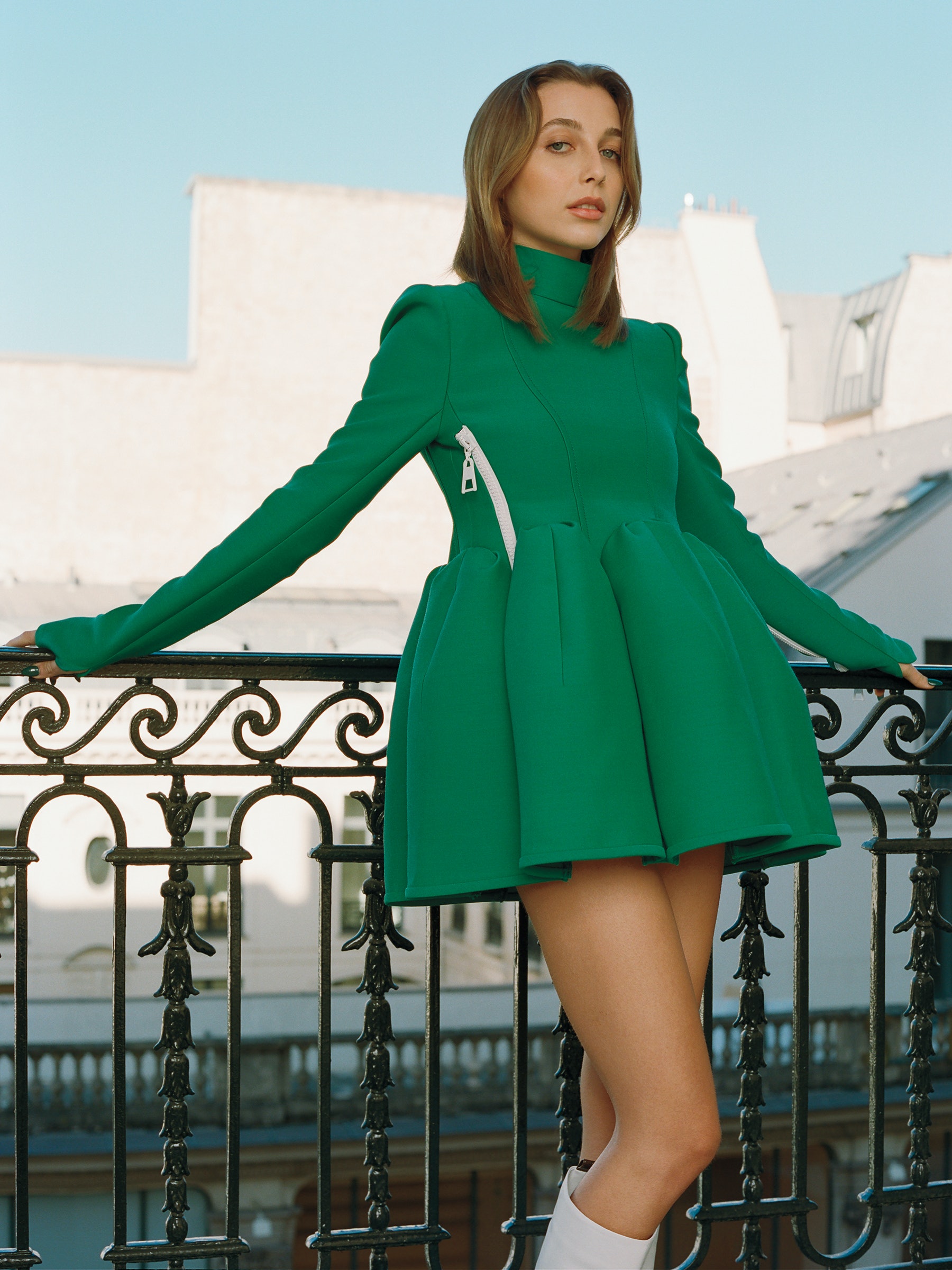 Since first launching her YouTube page, in 2016, Emma Chamberlain has gone from vlogging phenom to full-fledged fashion star and entrepreneur. Last December, the skincare-meets-wellness brand Bad Habit Beauty tapped her to serve as a temporary creative director. Over the summer she fronted a footwear campaign for Louis Vuitton shortly before attending the Met Gala as a guest of the maison. For our “The Originals” series, the now 20-year-old discusses juggling her extremely online life with the exclusive world of luxury fashion, and how she, too, would like to delete it all sometimes.

Your confessional, comedic videos of you drinking iced coffees while shopping in SoHo and cutting your own hair have earned you more than 10 million subscribers on YouTube. The New York Times even went as far as to say you single-handedly “changed the world of online video.” I’m curious how someone with those credentials defines originality.

It’s near impossible to create something completely from scratch. What makes something original comes down to whether or not it feels distinctly different than anything that has been done before. The musician Mac DeMarco is a great example of someone who is truly original. He has taken little pieces of music he admires and combined them with his own innovative ideas to create a sound that is so uniquely his.

You recently attended Paris Fashion Week. Did you see anything original while you were there?

I went to the Louis Vuitton show, and the atmosphere reminded me of Dracula: very vampire-esque, horror-film energy. You know, a lot of red velvet, a lot of extravagant chandeliers, extreme boxy silhouettes, but also incredibly dainty, beaded, sheer, vintage-inspired dresses. The whole experience reminded me of the Tower of Terror at Disneyland, but in an haute couture way.

So how does a YouTuber not just sit in the front row, but become one of the faces of Louis Vuitton’s campaigns?

I got my very first call about working with Louis Vuitton around the spring or summer of 2019. I was going through a really tough time in my personal life. When my agent told me that Louis Vuitton wanted to work with me, I was like, I don’t even think I can think about this right now. Looking back, it was so funny: When you’re in a state like that, sometimes you just need something to suddenly wake you up so that you become conscious again. So then I was like, Oh shit! Wait, hold on, this is actually awesome! I don’t need to be upset right now. [Laughs]

You should thank Nicolas Ghesquière for giving you an “aha” moment.

I didn’t understand how big a deal it was. I thought that it was one of those things where I would just go to the show and sit in the back row. But then it was like, Oh my god, people want to take my photo? Oh wait, I’m sitting in the front row! It was really magical.

On YouTube, you press record and chat directly with your audience. But the fashion industry, especially at that level, has a lot of gatekeepers.

If you look at photos of me from when I first started doing all this, I look like a deer in headlights, because that’s exactly what I was; I was shoved into a world that’s been around for a very long time. It has a lot of history, and quite the family tree, if you will. But I didn’t grow up in this world, so I’m very new to every single element of this.

You’ve certainly come a long way from the first video you uploaded to YouTube: a two-and-a-half-minute clip showing you modeling “city-inspired” outfits in San Francisco.

Here’s the thing: I’ve always loved clothes. My dad is an artist, and my mom went to fashion school. But as much as I’ve always been interested in fashion, whether or not I was actually able to live it was another story. When I was going to school, I was wearing a school uniform. And then on Fridays, we got to dress however we wanted. I was like, Okay, I’m wearing skinny jeans, which is now something that makes me want to vomit when I think about it.

Does it ever feel weird that there is an online record of those style choices?

It definitely can feel like baggage, especially when I have to meet new people and I want them to just know me for who I am right now. I tend to get very obsessive about my past, because people can see some of the stuff that is so cringe. I mean, for fuck’s sake, I was 16! Of course it was cringey.

Your generation is really the first to have grown up entirely on social media.

There are times when I want to go and delete it all. But I also think that I’m taking myself a little bit too seriously in those moments. I mean, when I see other people’s content from when they were 16, I think it’s so cute. I’m very meticulous about everything, so the fact that there’s so much of me on the Internet—a lot of it out of my control—makes me very anxious at times. But I try to remind myself that it’s just not that fucking deep.