As I sit down to write this review, there are reports that there is no sign of the Arctic ice build-up that should be taking place in the Laptev Sea. "The lack of freeze-up so far … is unprecedented," said one researcher, while another said it was entirely consistent with predictions indicating the Arctic would have its first ice-free summer sometime in the next 30 years. "It's a matter of when, not if." 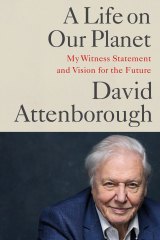 A Life on Our Planet by David Attenborough.

The transformation of the Arctic from an ecosystem dominated by ice and snow to one of open water and rain is only one indication of the pace and scale of change being driven by human activity. Over the past 50 years, humans have killed almost 70 per cent of the animals on Earth. Ocean ecosystems are in crisis. Global temperatures are already more than a degree above pre-industrial averages and are on track to rise further, and probably faster than previously expected, with some studies suggesting we are close to triggering an irreversible cascade of climate system feedbacks that will permanently transform the planet into a radically less habitable hothouse state.

Indeed, it may already be too late to prevent this: in an article published in Nature last year, seven of the world's leading climate scientists warned the "time left to prevent tipping could already have shrunk towards zero".

In the face of a catastrophe of this scale it often seems easier to simply turn away. What kind of action would be big enough, effective enough to turn things around? How can change happen in a world where governments in Australia and elsewhere continue to privilege the short-term interests of fossil fuel companies over the future of their citizens?

New books by Tim Flannery and David Attenborough both seek to answer these questions, presenting road maps to a liveable future.

A Life on Our Planet is the companion book to Attenborough's Netflix special of the same name. Part witness statement, part vision document, its first half opens in the ruins of Pripyat, near Chernobyl, a place of "utter despair", laid waste by "bad planning and human error", then moves into a series of snapshots of Attenborough's life and career, beginning in 1937, when Attenborough was 11, and ending in 2020, the year of Attenborough's 94th birthday, before finally presenting the outline of a way forward. 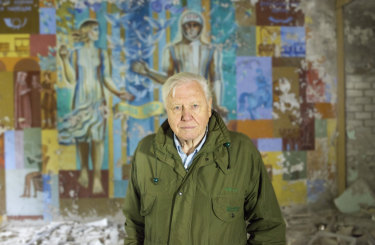 The book's structure might sound scattered, even awkward, but nothing could be further from the truth. Instead, as Attenborough moves through the decades, he captures the accelerating ruination of the planet in the starkest possible terms.

Nowhere is this process captured more eloquently than in the three statistics – world population, atmospheric carbon dioxide and remaining wilderness – that preface each chapter; as the first two tick upwards, the other drops more and more precipitously.

The result is extremely powerful. One of the difficulties many of us face in trying to think about environmental issues, and climate change in particular, is their scale. Yet just as the first photographs of the Earth alone in space altered the way we thought about our planet, making it clear, as Attenborough puts it, that our home is "not limitless", so too the decision to use his own – unusually long – life as a framing device makes it possible to see the ways in which past and future connect, and to recognise the ways a larger perspective alters the way we think about the problems we face. 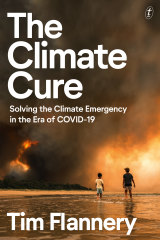 The Climate Cure by Tim Flannery.

This perspective informs the book's second half, in which Attenborough lays out a vision for a sustainable world in which both animals and humans can thrive. Elements of this are likely to be familiar to many – a rapid transition to renewable energy, an end to land clearing and other destructive practices, massive programs of rewilding on land and marine reserves in the oceans. Yet Attenborough also makes clear the degree to which questions of climate action are inseparable from questions of climate justice, emphasising the need to improve the lives of the world's poorest, and the need for strong international institutions and systems of accountability.

Flannery's The Climate Cure takes a more granular, but complementary approach, arguing that despite decades of failure, Australia's successful response to COVID-19 offers a model for an effective response to the climate crisis. The cure he proposes falls into three parts: rapid cuts to emissions, effective adaptation to life on a hotter planet and, perhaps more speculatively, an embrace of drawdown pathways that will enable us to capture past emissions and thereby reduce atmospheric carbon dioxide.

The anger and despair in The Climate Cure is palpable. Declaring he no longer believes "a calm, non-emotional approach is most likely to succeed", Flannery takes aim at opponents "willing to mislead and sacrifice the public good in their pursuit of monetary profit", the system of political influence that has allowed the fossil fuel industry to capture Australian governments and the 25-or-so federal MPs who hold our government hostage by frustrating action on climate change ("in the war on fossil fuels, the worst are collaborators"). Similarly, he is contemptuous of arguments in favour of a gas-led recovery, or delaying tactics such as calls for an "orderly transition", instead emphasising the fact the state of the climate makes such notions criminally irresponsible. As Flannery declares, "the cost of … an orderly transition will be chaotic disorder in the climate system".

Yet the real strength of his book is its emphasis on solutions. Discussing the energy grid, he points out that contrary to claims renewables are unable to supply sufficient baseload power, the ACT already runs on 100 per cent renewable energy, and that in South Australia, the introduction of large-scale battery technology saved consumers $50 million in its first year alone. He also argues for institutional solutions, perhaps most significantly some form of independent commission responsible for developing and implementing adaptation strategies.

In the final pages of A Life on Our Planet, Attenborough returns to Pripyat, observing that despite the destruction wrought when the reactor at the Chernobyl nuclear power plant exploded, the wild has reclaimed the abandoned city. It is an eloquent reminder of the fact life on Earth has survived catastrophes before, and will no doubt survive them again. But it also underlines the fact our own survival is not guaranteed, and that, as Attenborough says, "we often talk of saving the planet … the truth is we must do these things to save ourselves".

A Life on Our Planet: My Witness Statement and a Vision for the Future
David Attenborough, Ebury Press, $39.99

The Climate Cure: Solving the Climate Emergency in the Era of COVID-19
Tim Flannery, Text Publishing, $24.99

James Bradley is the author of Ghost Species (Hamish Hamilton).