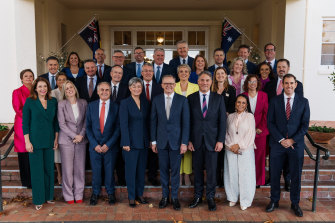 Prime Minister Anthony Albanese with his ministry. They will all recieve a 2.75% pay rise from July 1. Credit:James Brickwood

Dutton, as opposition leader, will earn around $401,000. Greens leader Adam Bandt will earn $314,737 as the leader of a minority party with more than ten representatives in parliament.

The tribunal’s ruling comes ahead of Wednesday’s decision by the independent Fair Work Commission about whether or not to lift the minimum wage, which is currently $20.33 per hour.

That will be handed down at 10am.

The tribunal is obliged to take that decision into account but as it has not been handed down, took last year’s into consideration instead.

In a statement, the tribunal said MPs had not been given a pay rise for three years.

“The tribunal notes the resilience of the Australian economy and the stronger than expected recovery from the COVID-19 pandemic,” the statement said.

“In reaching its decision, the tribunal was mindful of its history of restrained increases over several years, including no increases since 1 July 2019.”

The tribunal also pointed to the economic recovery that Australia has staged since the pandemic, with GDP increasing 3.4 per cent in the December quarter.

In its submission to the Fair Work Commission, the government said that with the current inflation rate 2.7 percentage points higher than wages growth, Australians are experiencing the sharpest decline in real wages in 21 years.

It recommended real wages not go backwards but did not specify a percentage by which the minimum wage should be raised, despite Albanese saying during the campaign that he supported earnings being increased by 5.1 per cent.

Inflation has shot up to 5.1 per cent and last week the Reserve Bank handed down its largest one-off increase to the cash rate in 22 years.

In 2008, when Kevin Rudd had just been elected to office, he banned MPs from accepting a pay rise to alleviate pressure on rising interest rates, saying elected representatives should set an example.