Horsing around! Heartwarming snaps of prancing dogs and cuddly kitten are among the finalists for international Comedy Pet Awards 2022

We all think we take the most adorable photos of our pets but these photos have come out on top of an international competition to find the funniest.

The Comedy Pet Photo Awards, co-founded by two professional photographers, celebrates the ‘special bond’ between humans and animals… and their hilarious scrapes.

The top 26 snaps shared below are all in the running to take home the crown in the international competition which in support of animal welfare charity Animal Friends which received submissions from more than 70 countries.

Co-founder Paul Joynson-Hicks said: ‘We really love running this competition, the adoration that people have for their pets and vice versa is a wonderful thing to see and be part of.

‘The images and videos entered are a genuine and touching reflection of the special bond that exists between humans and animals, and we can’t help but feel happier for seeing them.’

The winners will be announced on September 13. There is a £2,000 cash prize and a bespoke trophy up for grabs for the best photo, plus £5000 charity donation. 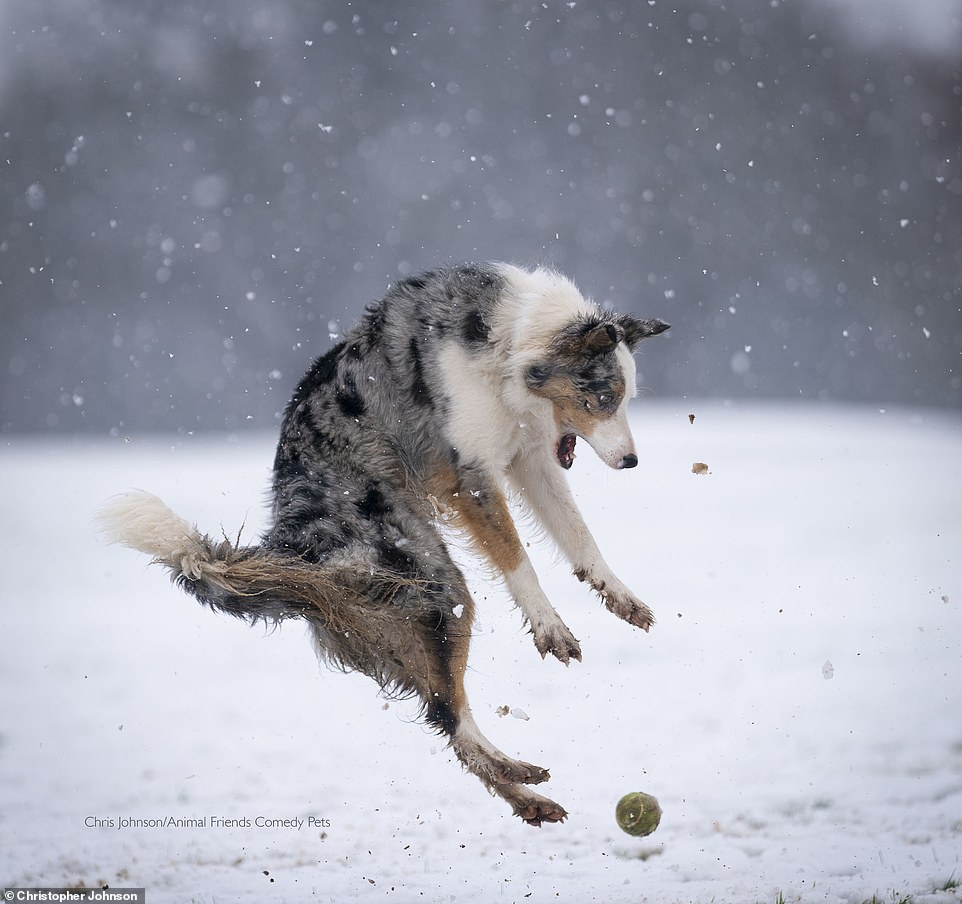 Where did that come from? British photographer Christopher Johnson took this photo of Star the dog getting surprised by a tennis ball while playing in the snow in a local field 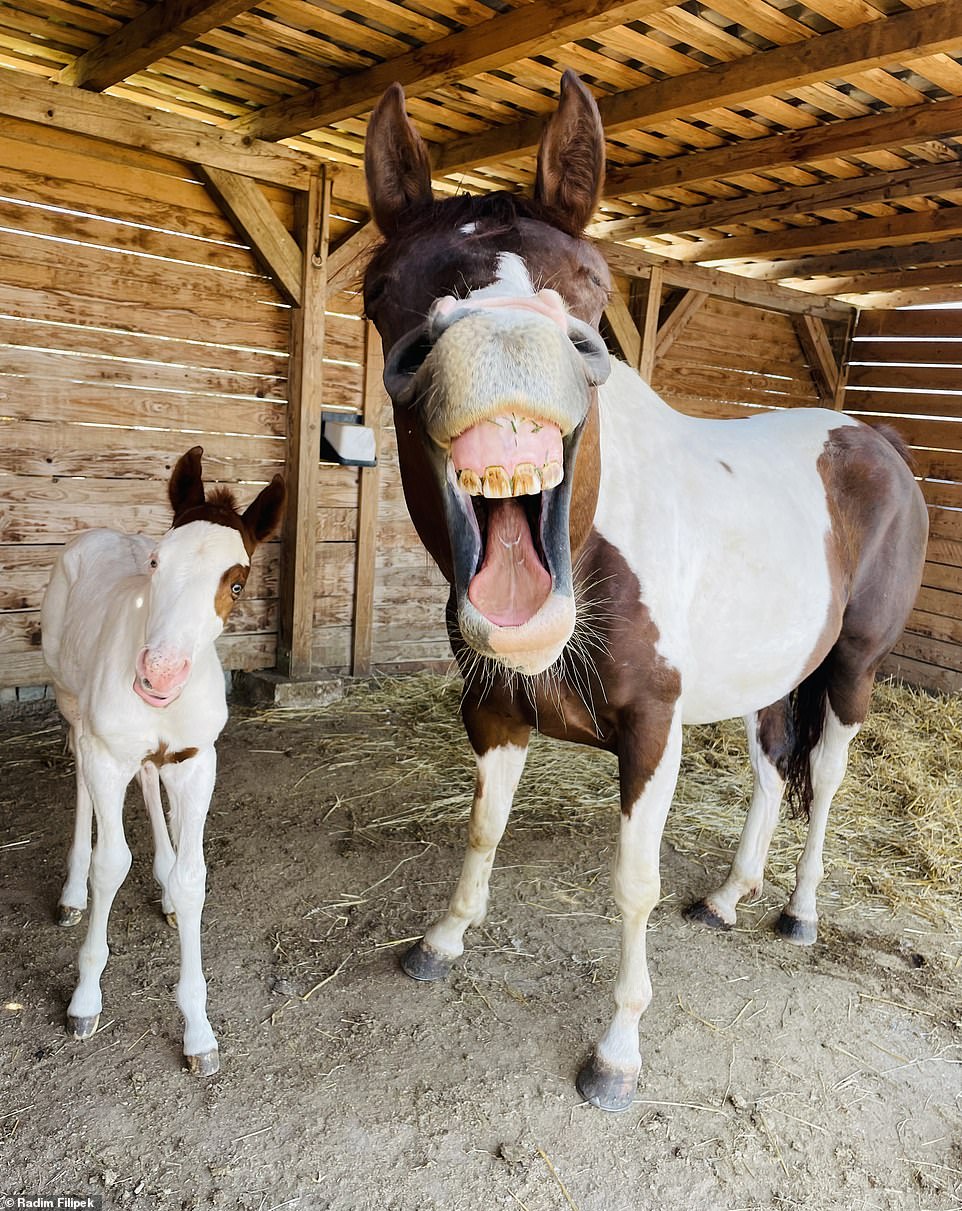 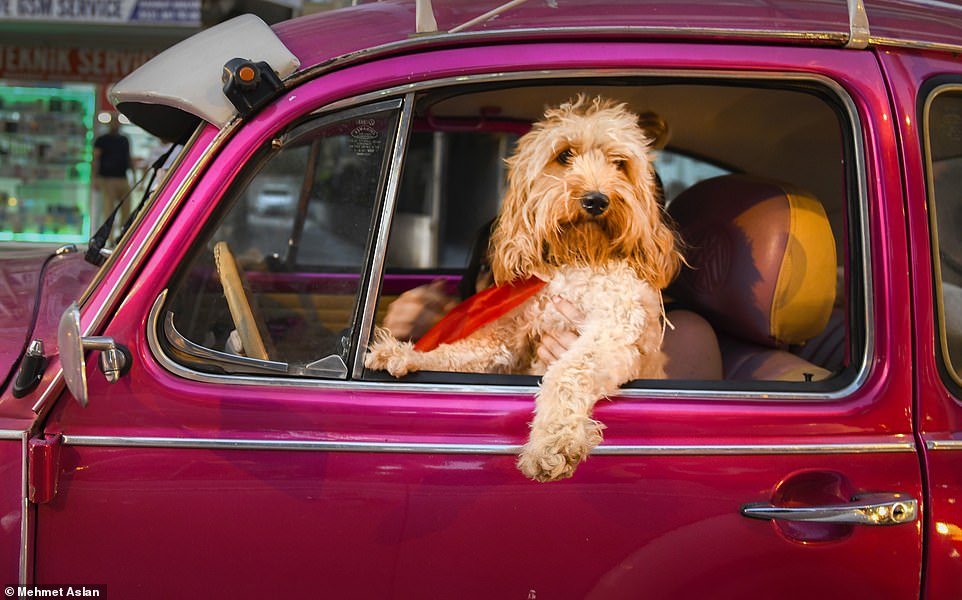 Fetch me a taxi! Mehmet Aslan took this photo of a chauffeured dog at the traffic light, explaining that he initially thought the dog was driving the car 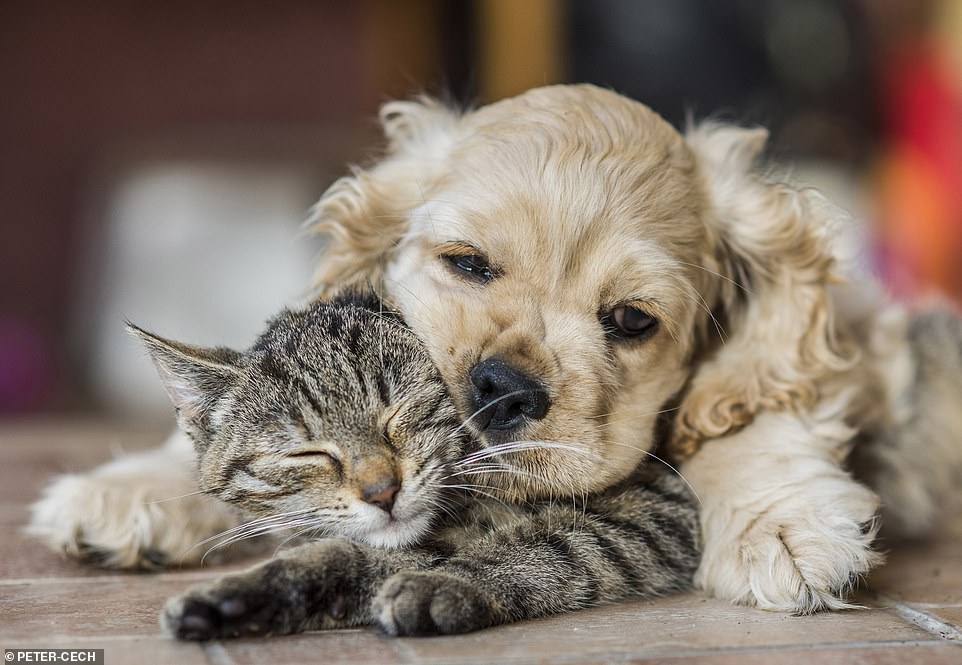 A-paw-able! Peter Cech captured an adorable moment between his spaniel and the family cat, saying it is a moment he will treasure forever’ 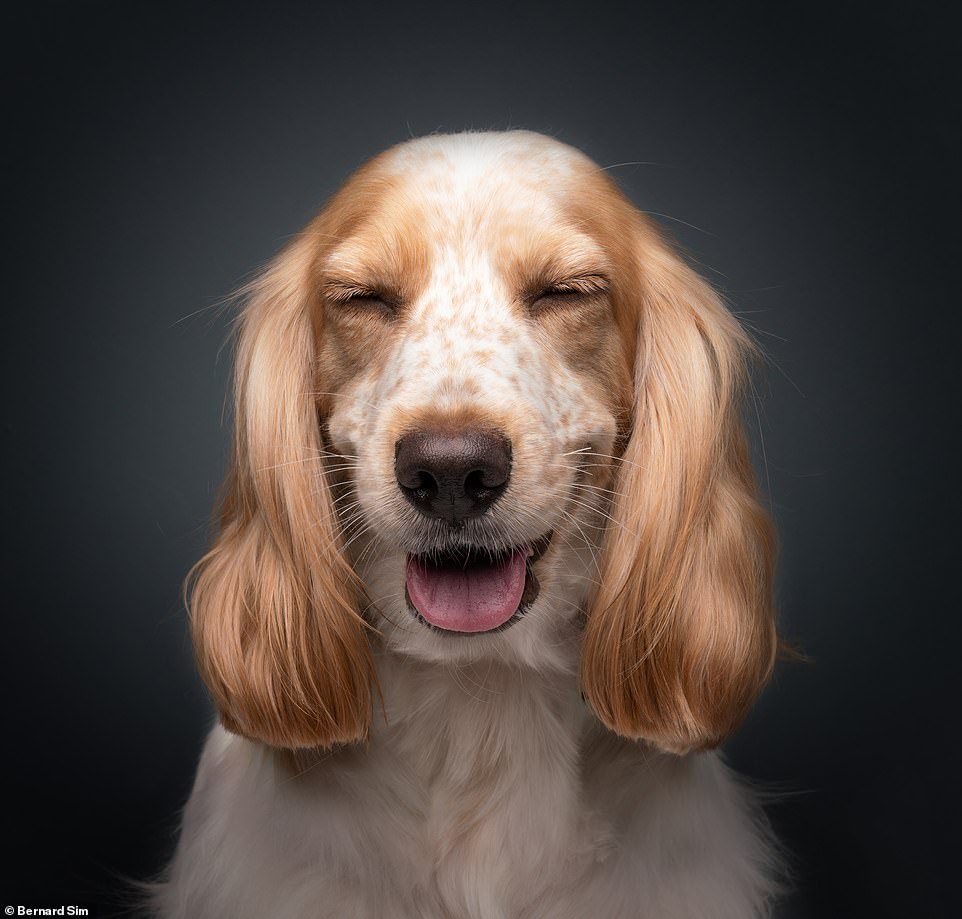 Playing it cool: Popcorn the dog closed his eyes at the exact moment Singaporean photographer Bernard Sim took this photo. Bernard said he had to shoot a lot of photos to get some usable ones, which resulted in bloopers including this fabulous snap 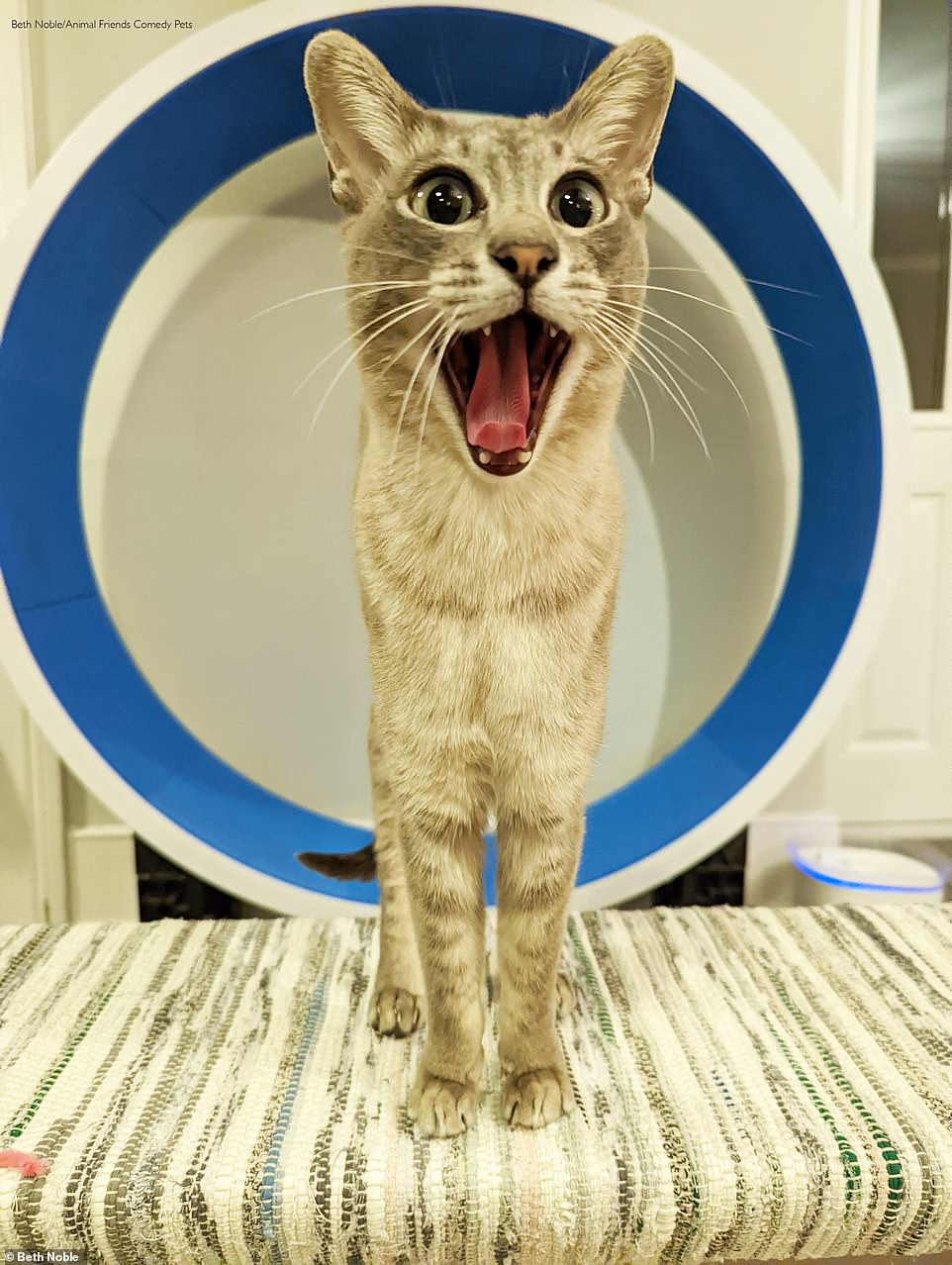 OMG, what is that? Beth Noble took this photo of her cat CK looking the picture of wide-eyed surprise… but what was behind the shock? 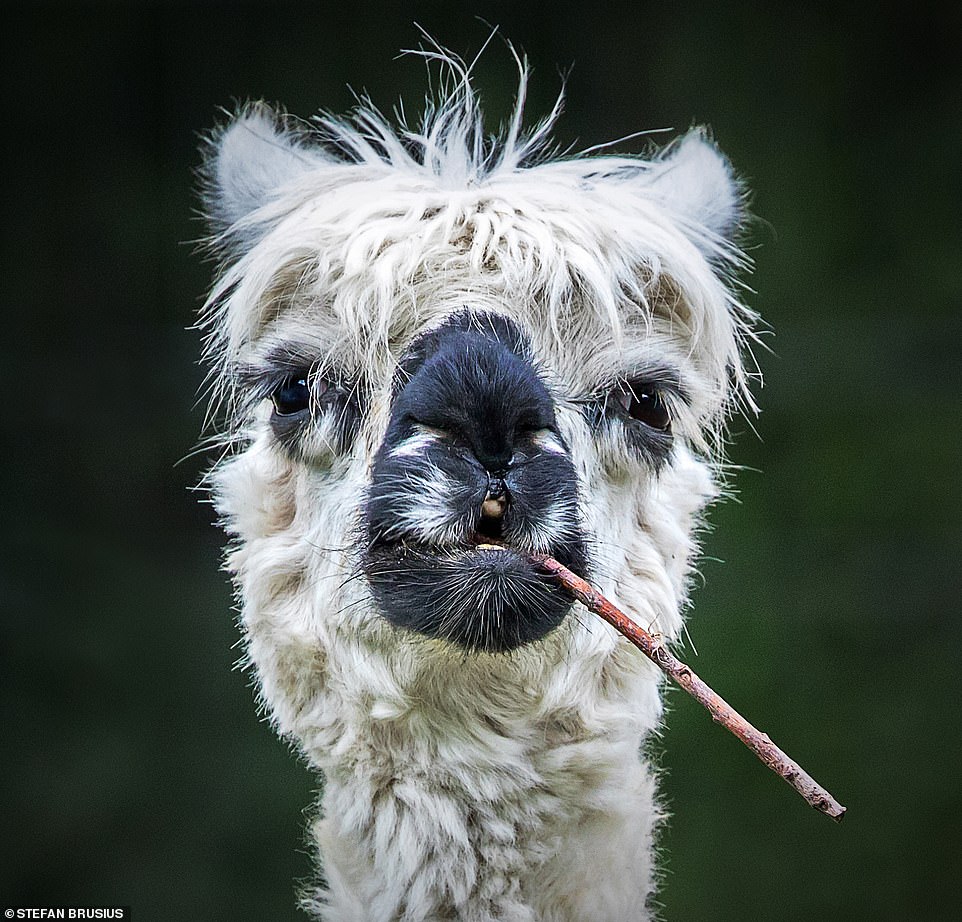 Smokin’ Alpaca! German photographer Stefan Brusius took this photo of an Alpaca chewing a stick that looks remarkably like he’s smoking a cigar 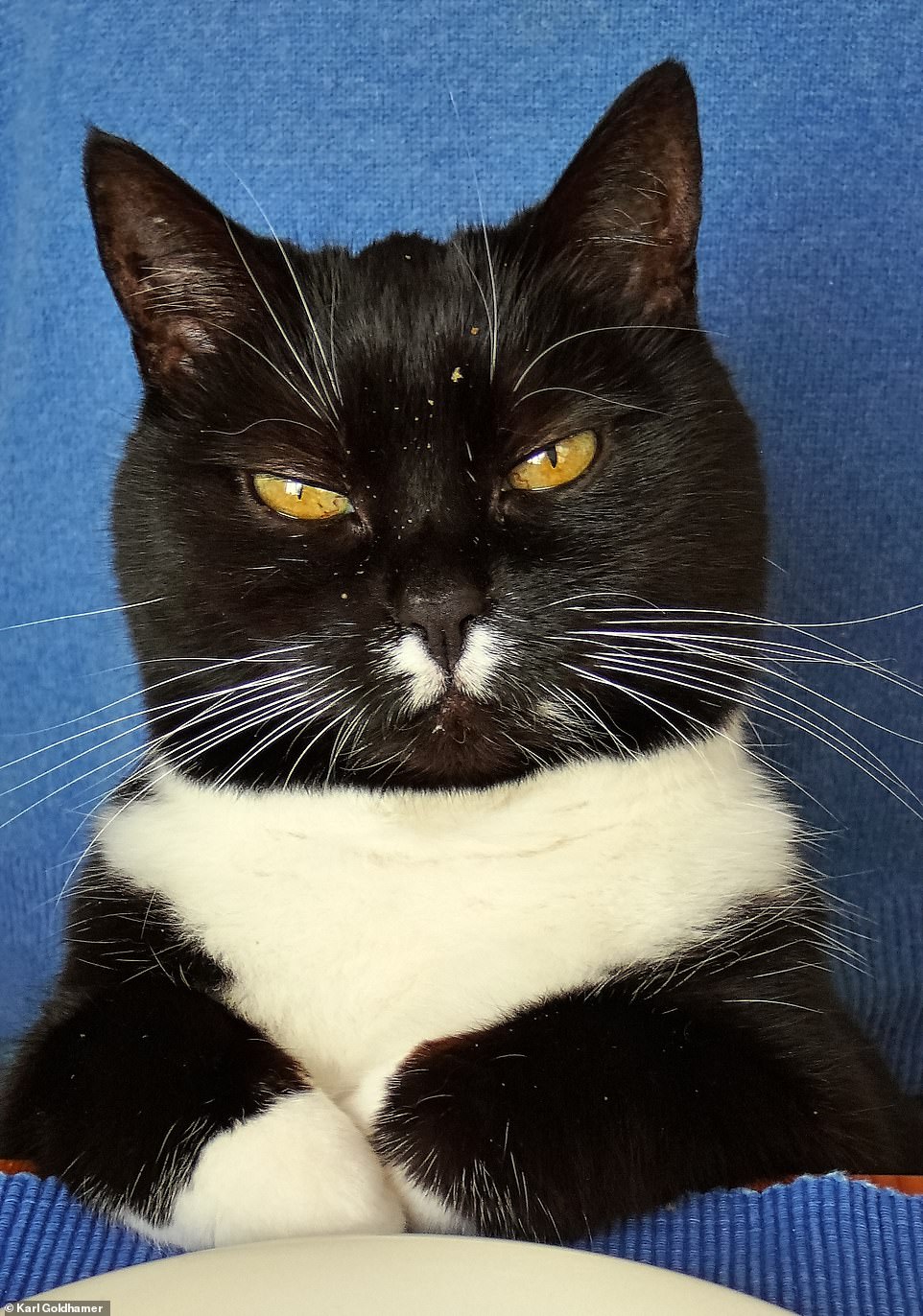 I’m not full yet! Karl Goldhamer submitted this photo of his late pet cat Lissi, who died nine years ago, sitting at the table 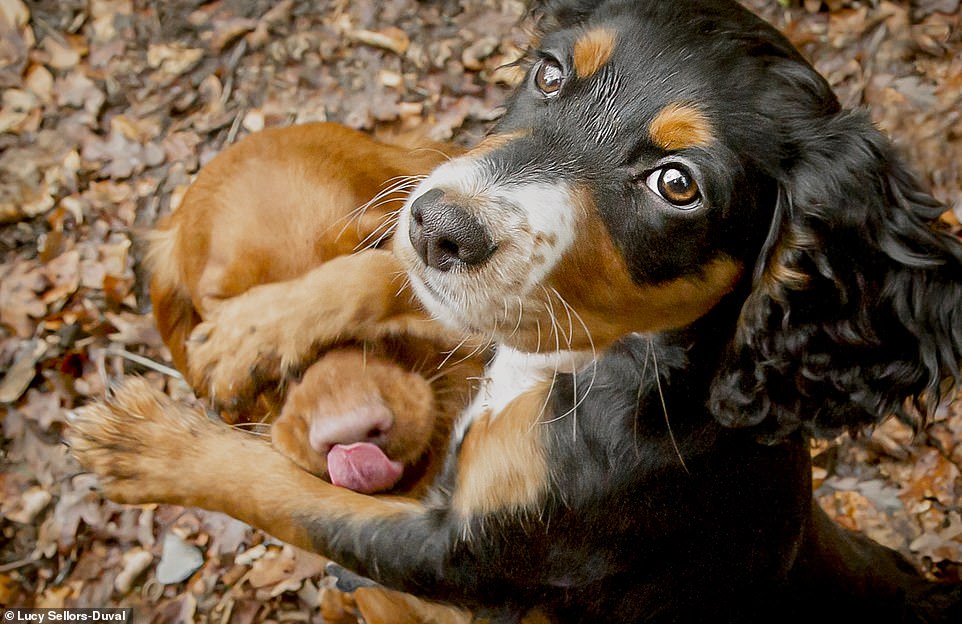 Look at me! British photographer Lucy Sellors-Duval took this photo of Benji (in foreground) stepping on his older brother Doug in a bid to nab all the yummy treats during a photoshoot 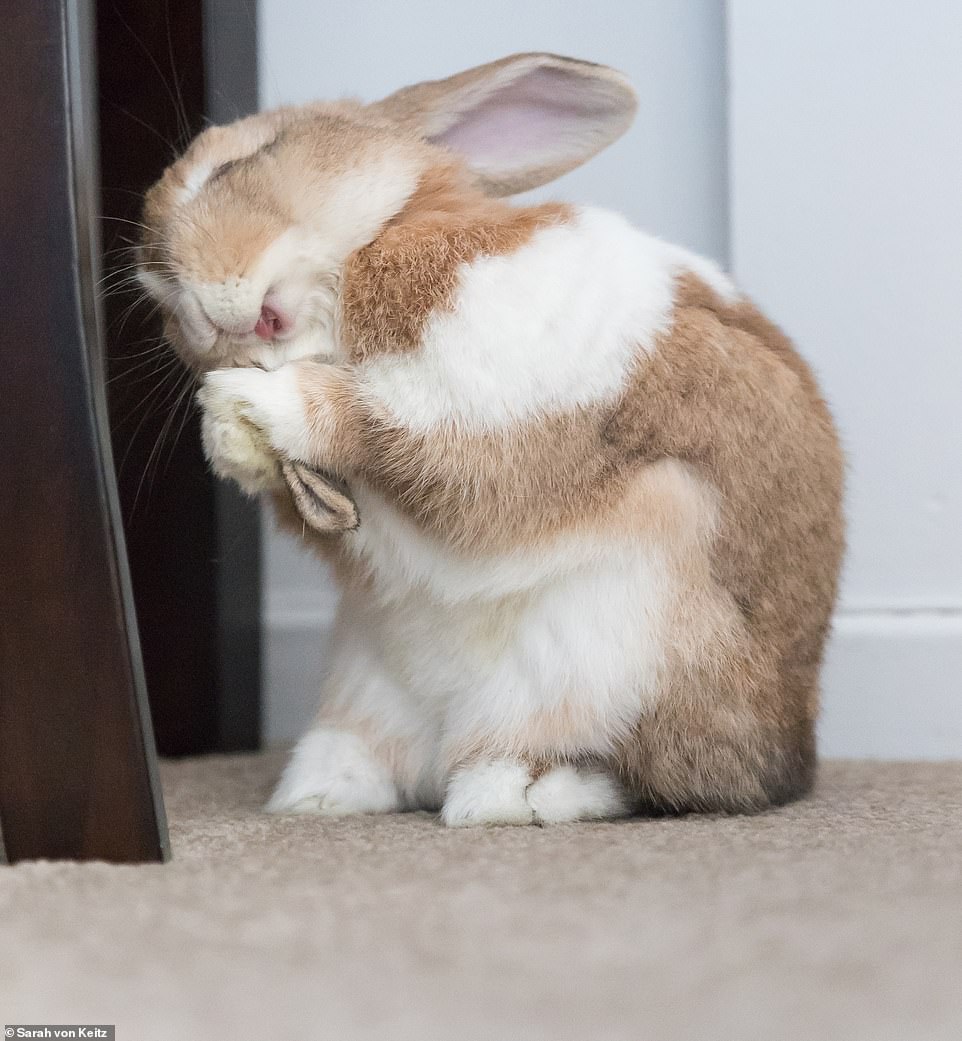 Strike a pose! Fibunacci the bunny looks like he could be praying, laughing or blowing a raspberry… but actually, he’s just cleaning his ears. The photo was snapped by Sarah von Keitz 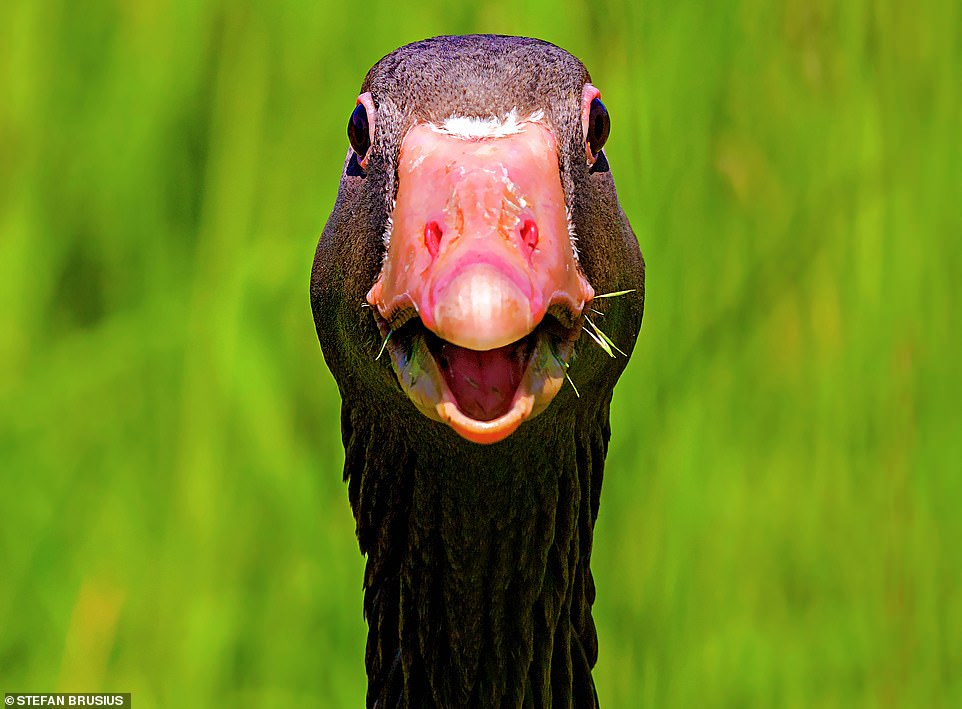 I’m talking to you! German photographer Stefan Brusius was in the right moment at the right time when he took the photo of this goose running across the meadow. He said: ‘It looked like she was speaking to me’ 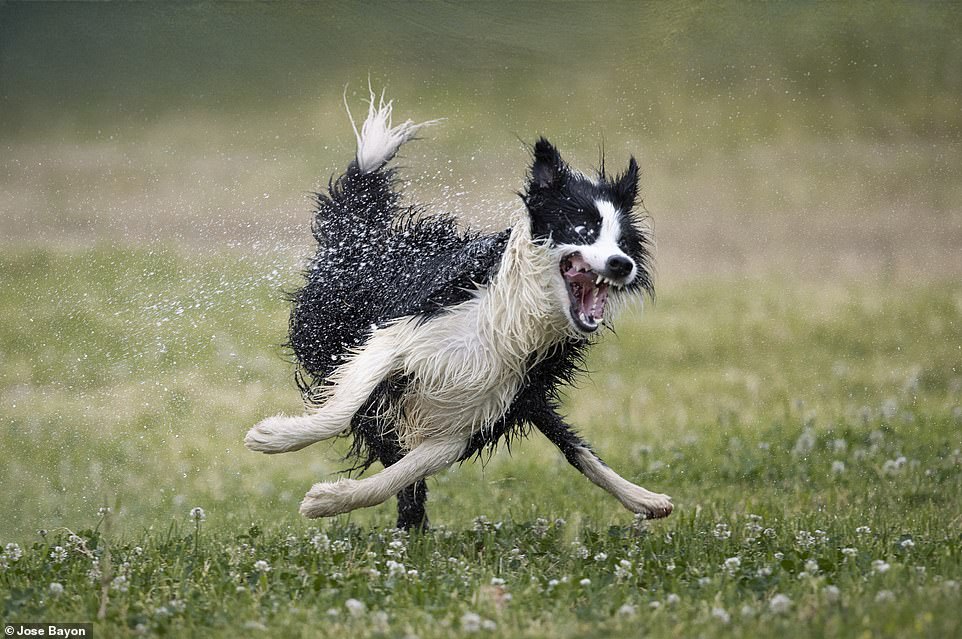 Wet and wild! Nilo, a 10-month-old adopted puppy, made a remarkable recovery after being almost killed in a car accident. Photographer Jose Bayon captured the moment he discovered water for the first time 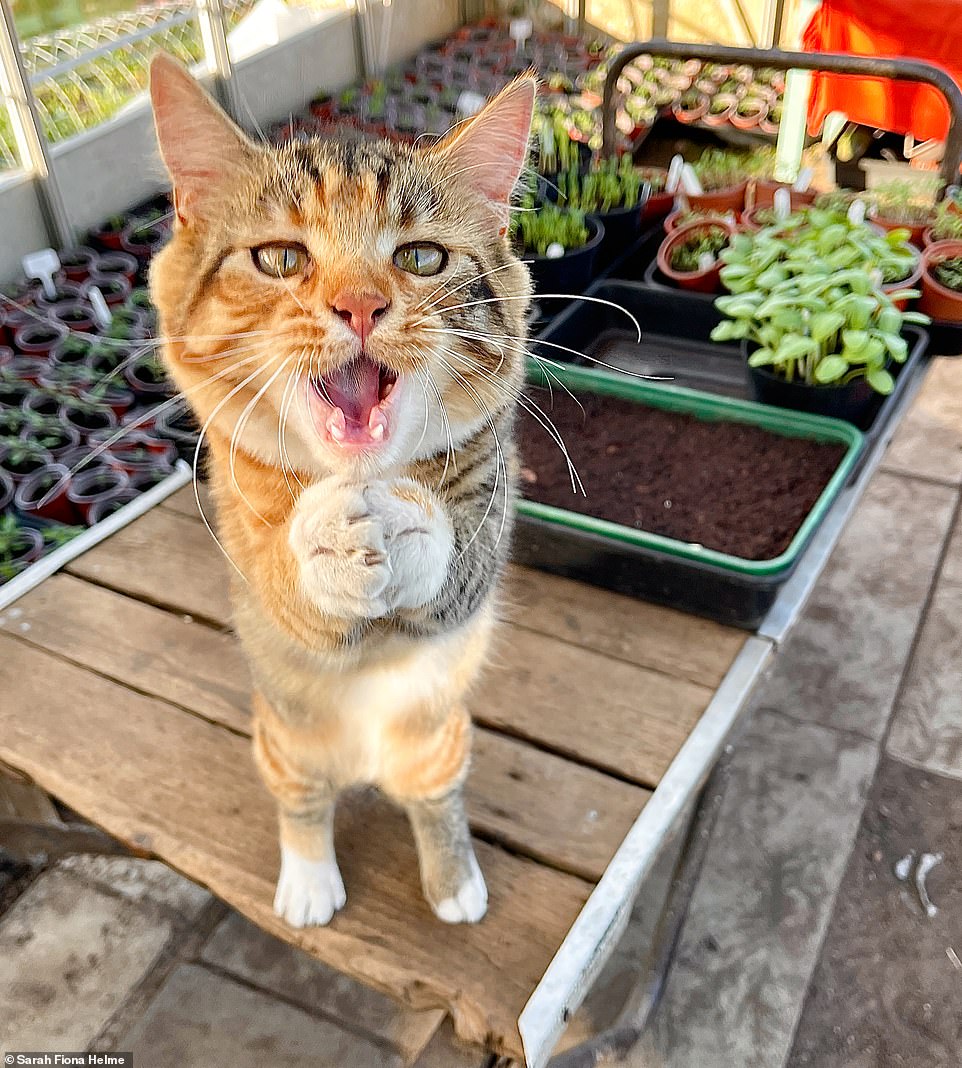 Purr-etty please? Photographer Sarah Fiona Helme, believed to be from the UK, took this photo of Rosie the cat in the greenhouse. Sarah said: ‘She decided to try, in her most engaging way, (and with the help of the wheelbarrow to stand on), to persuade me into giving her some of her favourite treats – which, being a lowly cat servant with no willpower, I did!’ 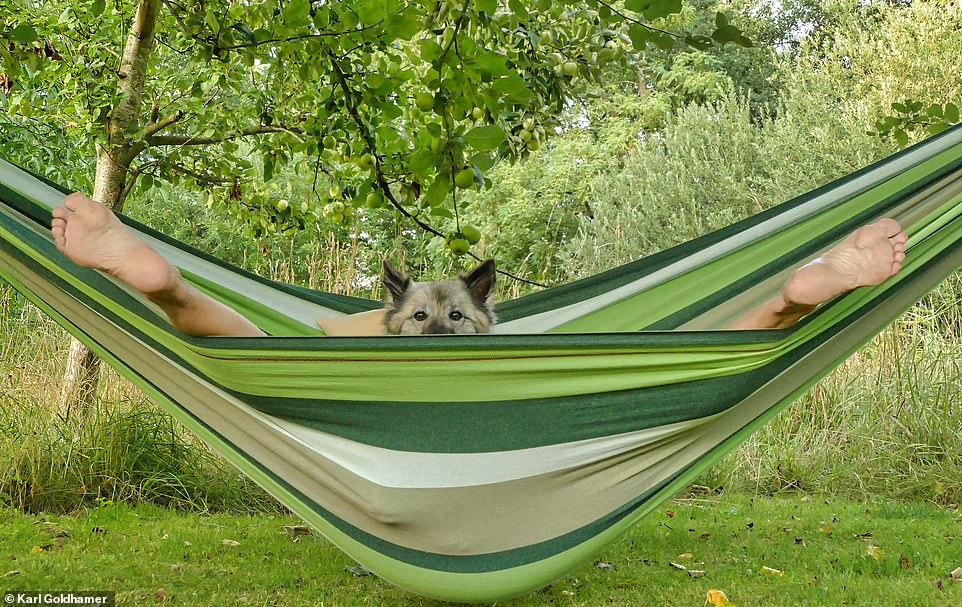 Who are you looking at? Photographer Karl Goldhamer shared this photo of a pup peering out over a hammock next to a pair of relaxed human feet. The snap is playfully titled ‘Werewolf 2.0’ 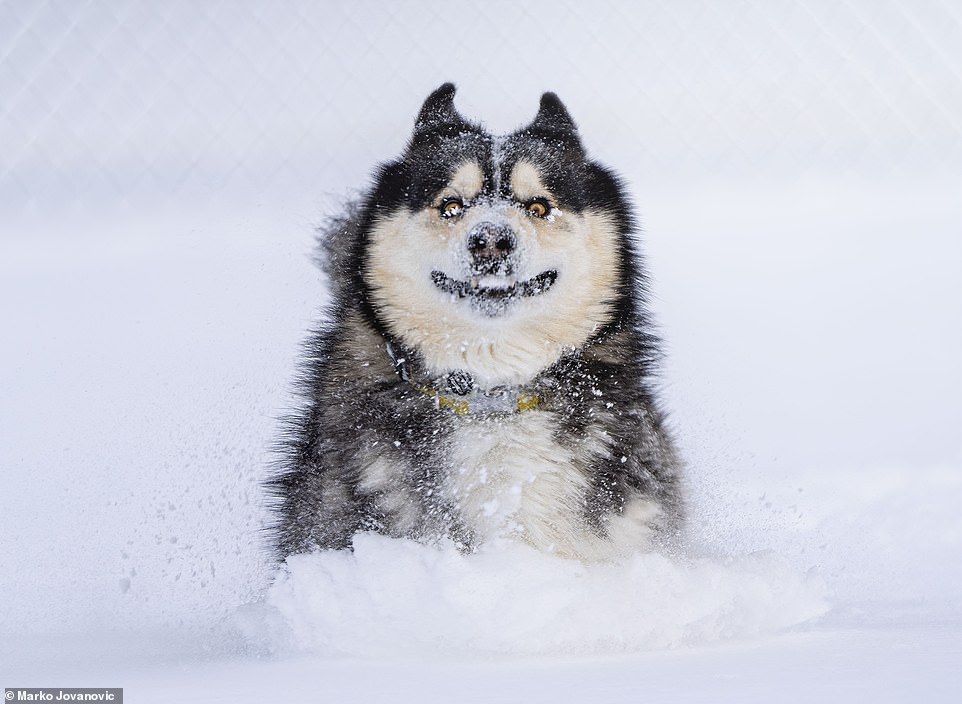 Dashing through the snow! Photographer Marko Jovanovic, from Chicago, rescued Carter the dog from a euthanasia list in California. He added: ‘We flew from Chicago to California to rescue him. This was his first time experiencing snow. As you can see he couldn’t believe what he had been missing out on all these years!’ 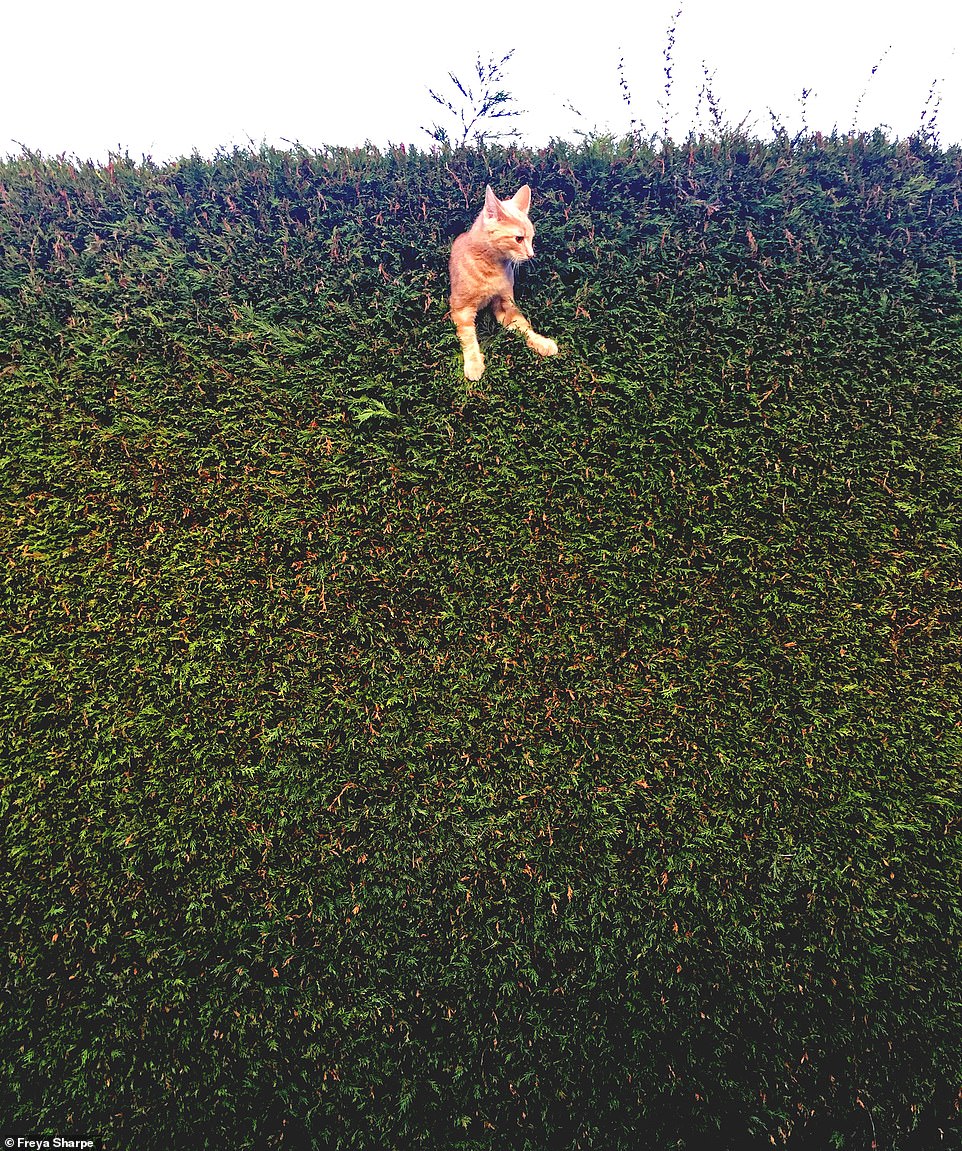 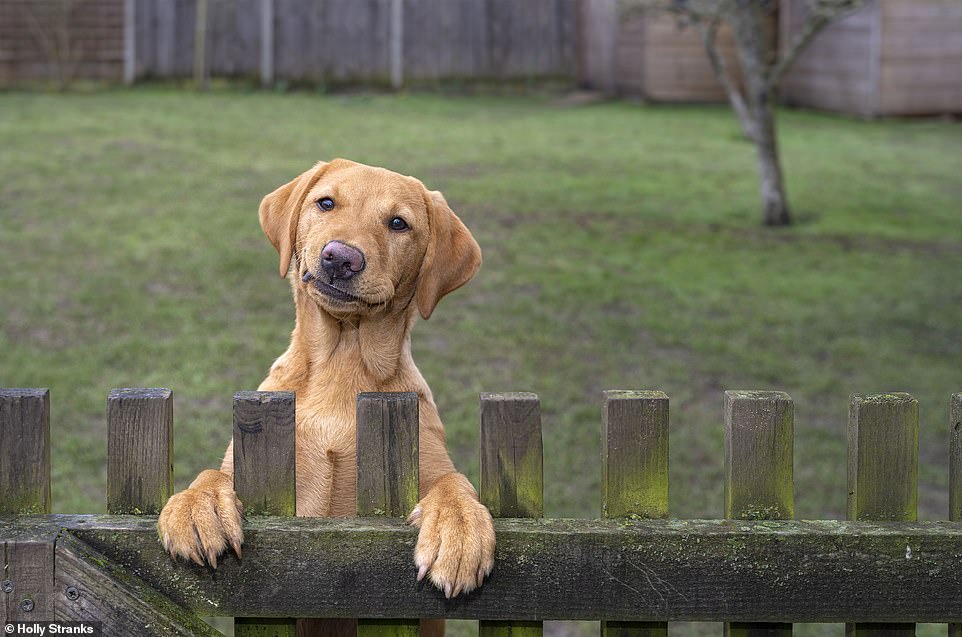 Hello! Photographer Holly Stranks captured this photo of inquisitive Penny the dog and noted she looked like Sid the Sloth from the Ice Age films 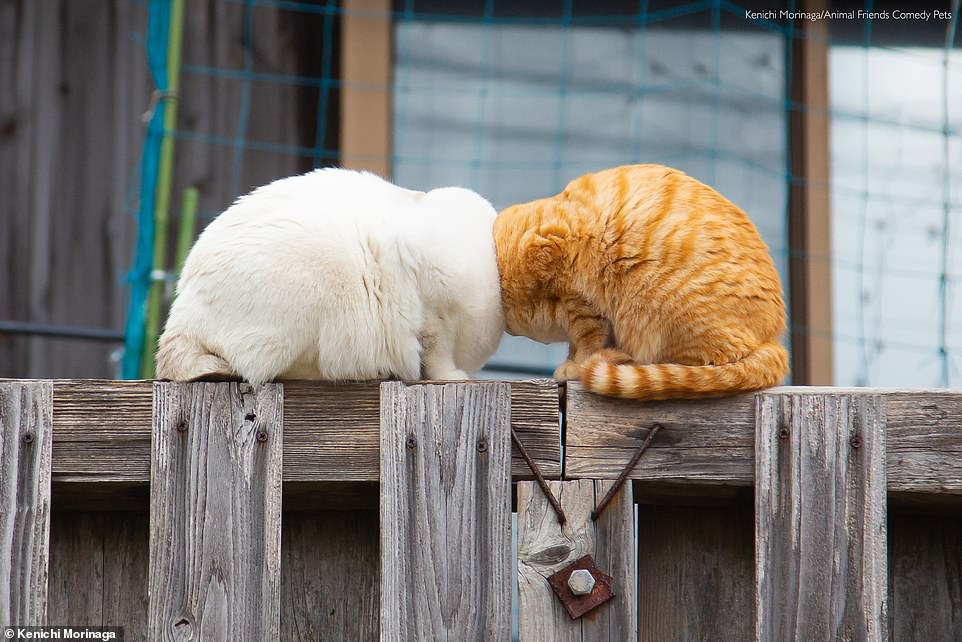 Lost in the fur! Japanese photographer Kenichi Morinaga took this photo of two cats bumping into each other on a fence. ‘It was like a cartoon bamped boom boom. A funny moment.’ 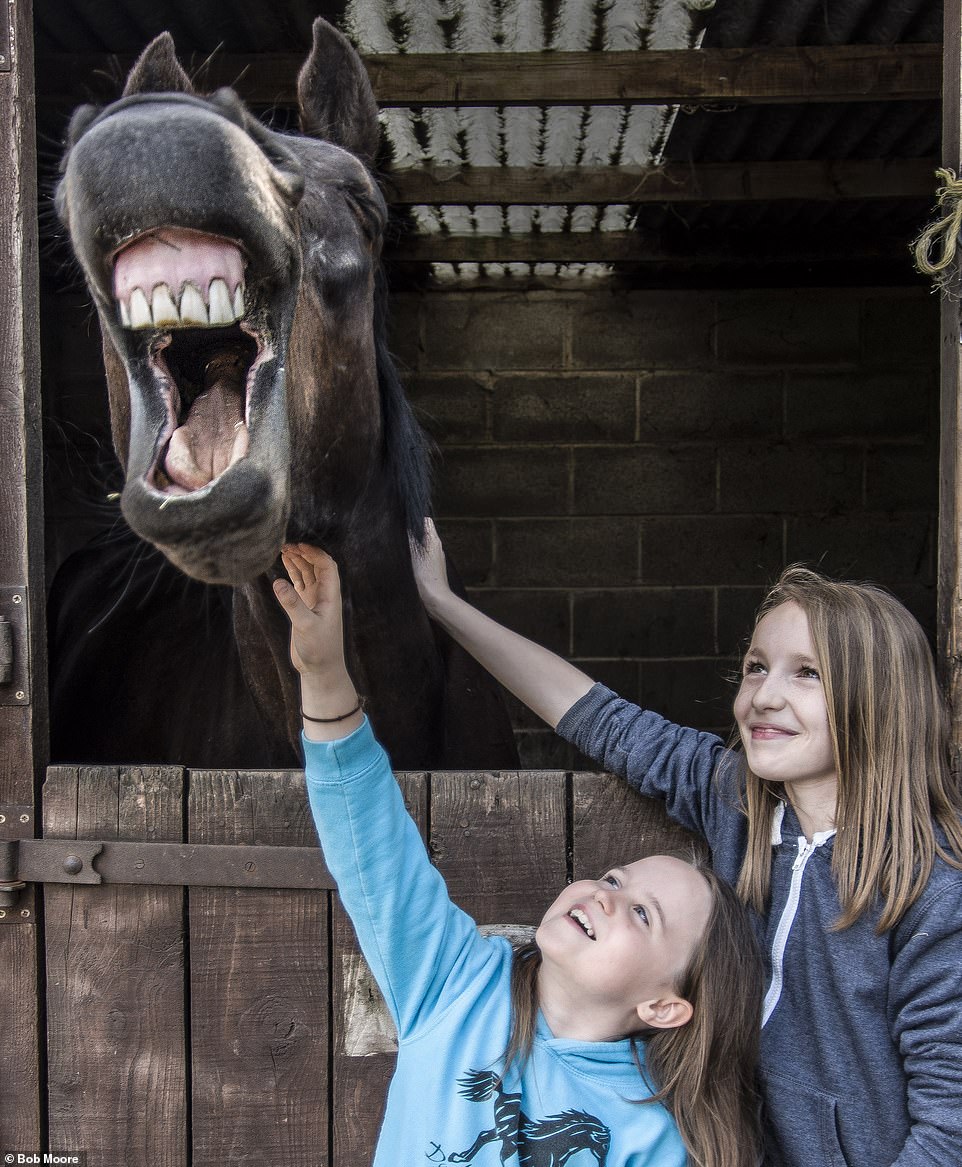 Neigh! Bob Moore took this light-hearted photo of a horse laughing while being given a scratch and a tickle 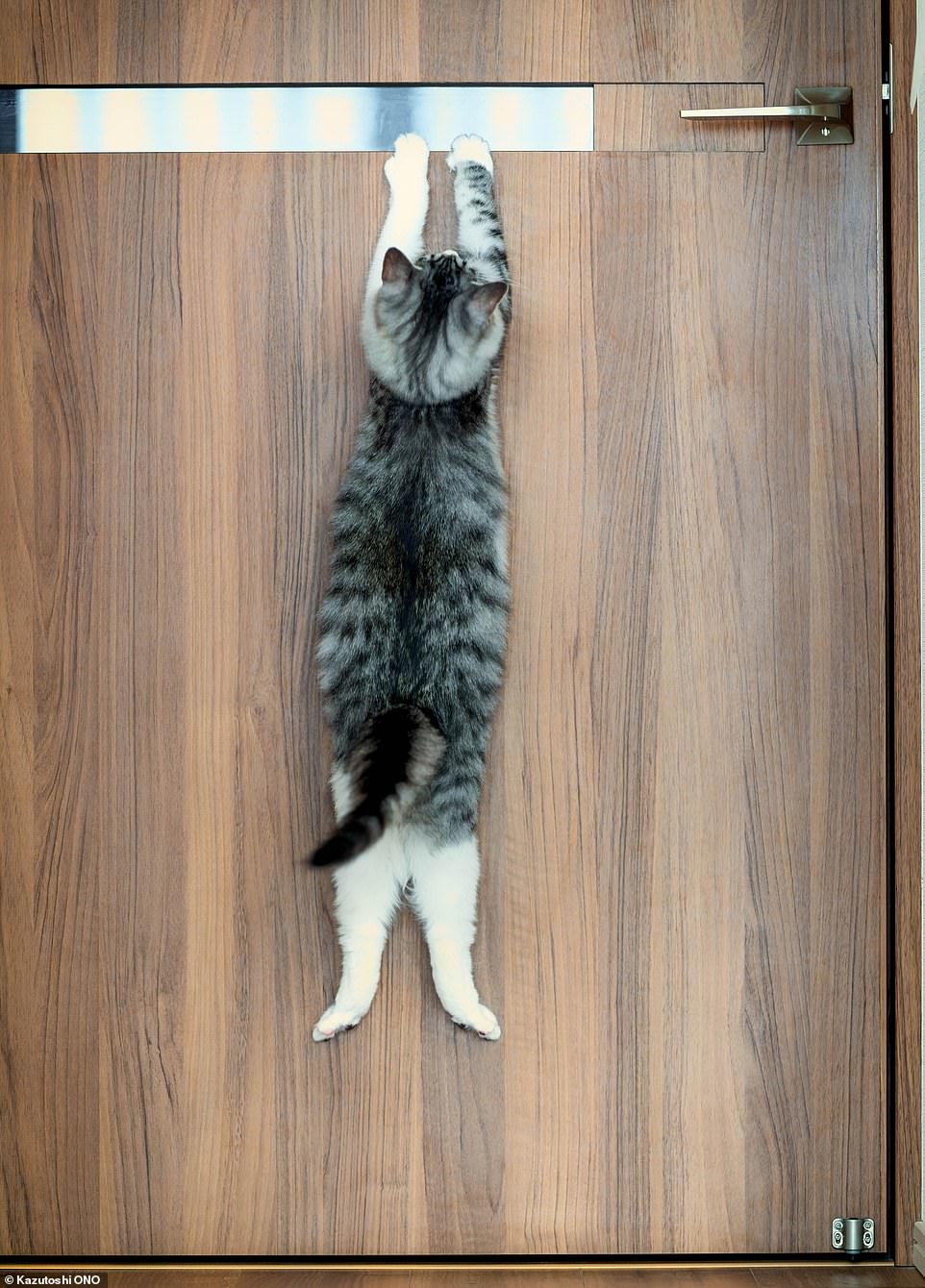 The great escape! Kazutoshi ONO rescued this cat from a local cat care facility. It looks like she’s desperate to escape but it’s just a door into a corridor and she often does it 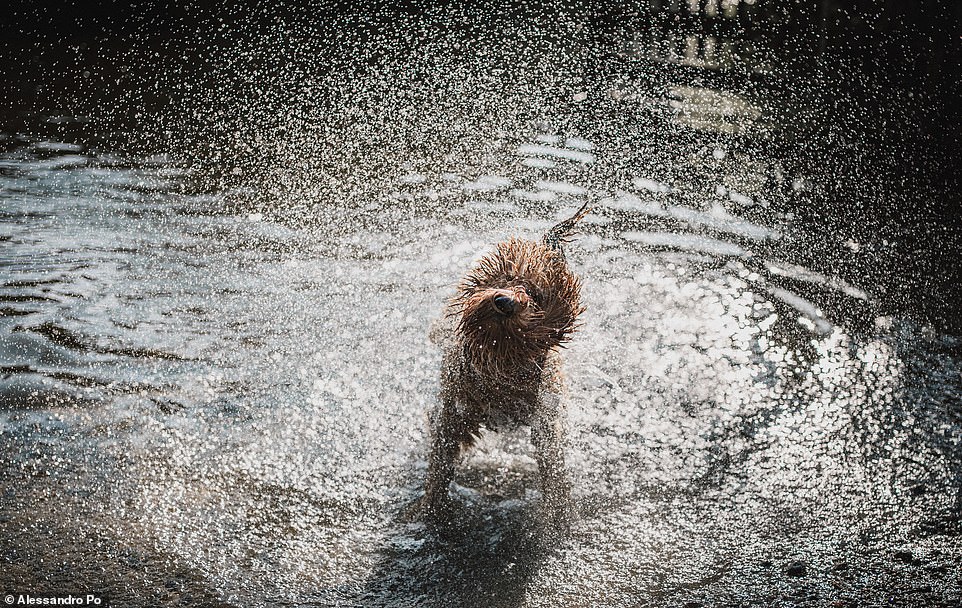 Shake it off! Alessandro Po took dog Max to the lake and caught him just out of the water with an amazing shake off. His face looks like a hedgehog 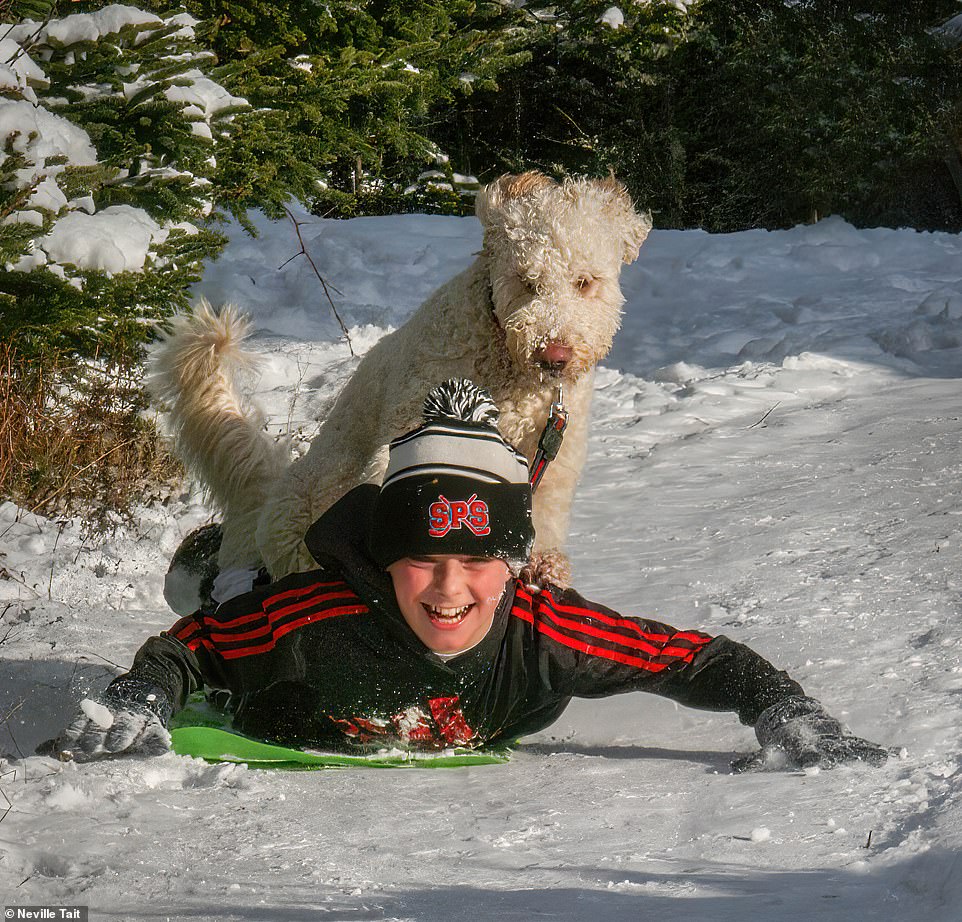 Catch me if you can! Neville Tait spent one Christmas in Canada when it snowed quite heavily. His Grandson Bowen had a dog, Oscar, who loved running around in the snow. This photo was taken the moment Bowen jumped on a piece of plastic to slide down the hill, and Oscar bounded after him and jumped on his back 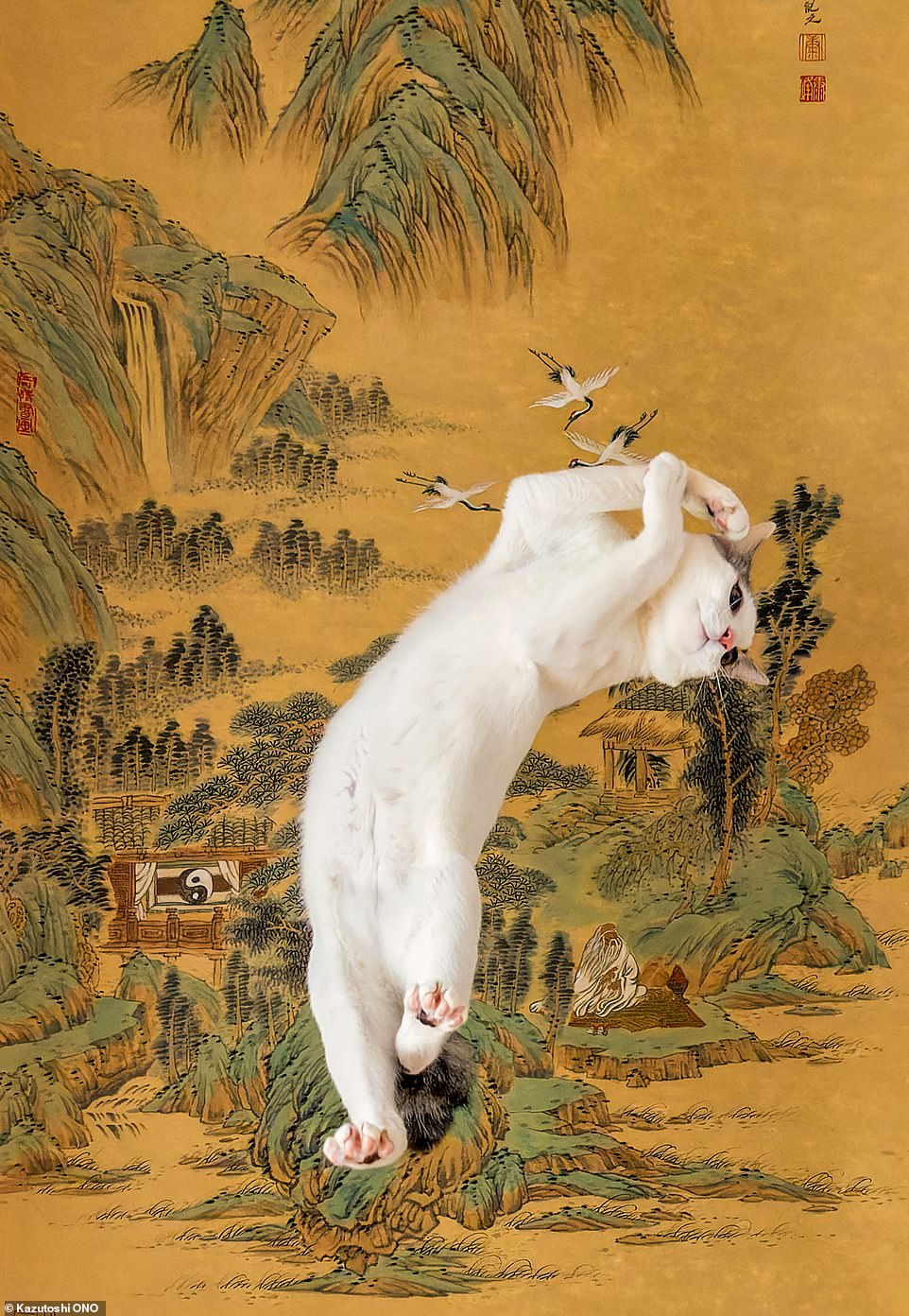 Daaaahling! Kazutoshi Ono wanted to create some Japanese themed images with a rescued cat, adding: ‘It reminds me of a famous Japanese story ‘Tiger is popping out folding screen’ 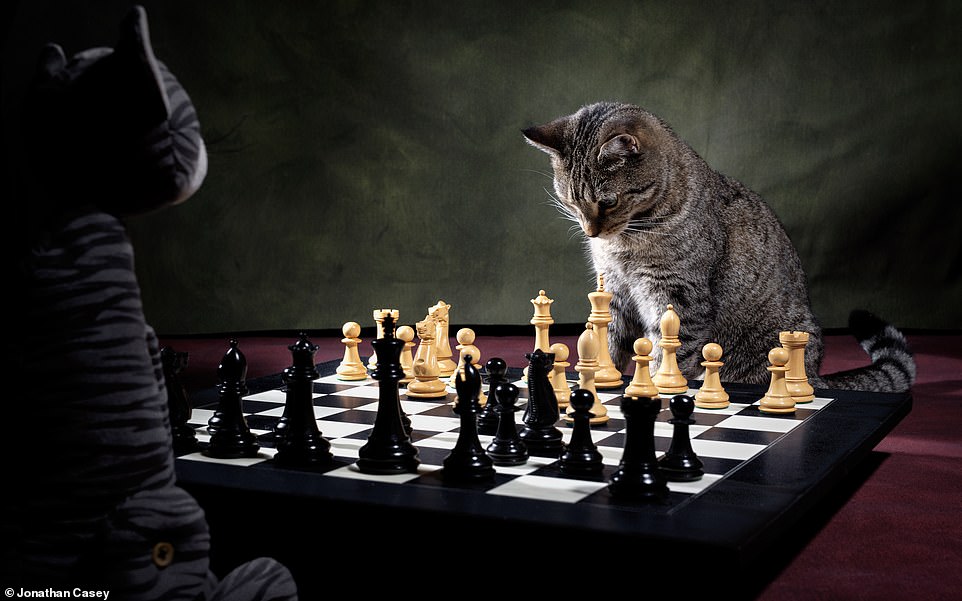 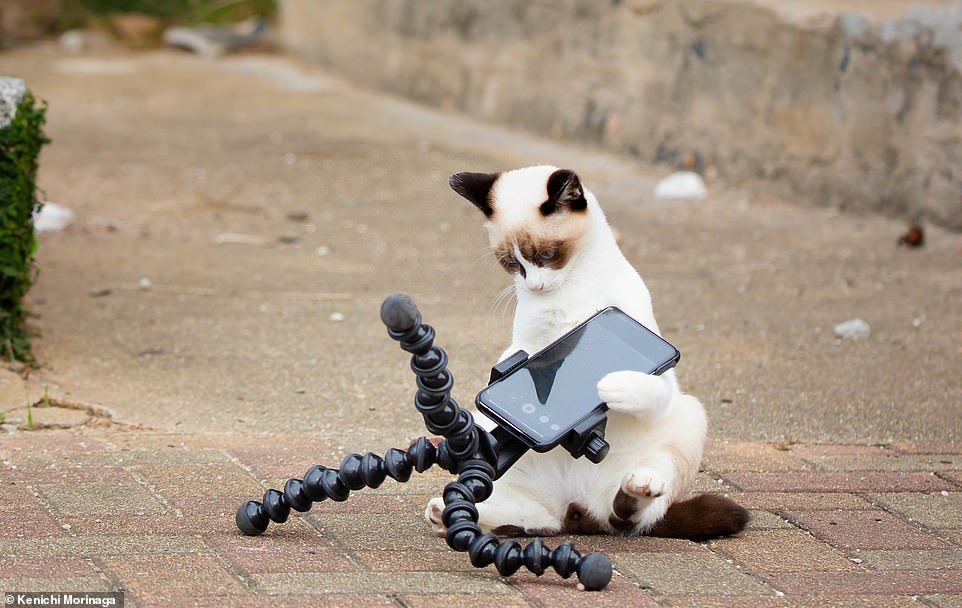 Let me take a selfie! Japanese photographer Kenichi Morinaga captured this hilarious moment of a cat trying to work out how to use a smart phone and tripod, attempting to become the next big influencer! 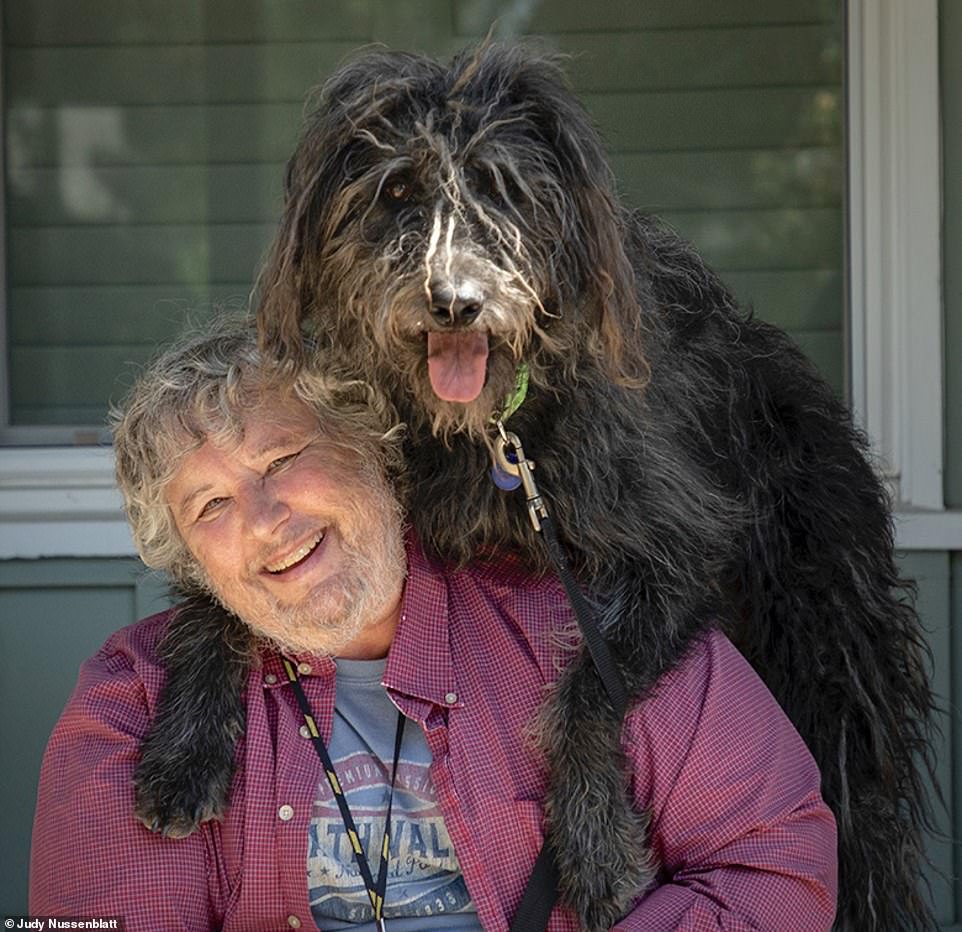 Best friends: Judy Nussenblatt, from California, took this image of David and Dudley. She said:  ‘During the early days of Covid, David and I took advantage of a beautiful day and we were out shooting pictures. Dudley was so excited when we got back that he threw his front paws around David’s shoulders and I snapped this picture. They both look like they could use a good haircut, but it was Covid….so who cares…’