The procession of the Queen’s coffin started today at 2:22pm from Buckingham Palace. The coffin is being carried from the late Queen’s primary residence to Westminster Hall, where the lying-in-state ceremony will take place.

Thousands, if not millions, of Britons have lined the streets of London today, hoping to catch a glimpse of Queen Elizabeth II’s coffin.

Draped with a flag, the coffin is also decorated with the Crown and a wreath of beautiful flowers.

The flowers include pines from the gardens of Balmoral, as well as lavander and rosemary from Windsor.

The pines represent the Queen’s last resting place and the spot where she was most at peace during her life. 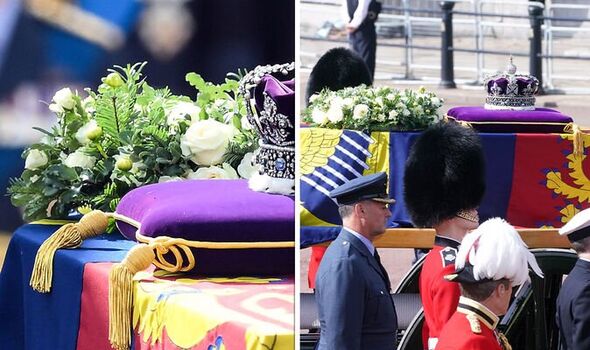 Speaking to the BBC, Irish correspondent Fergal Keane said: “The royal florist has place a fresh wreath of flowers [on the coffin].

A flower of remembrance, rosemary has long been associated with the memories of the departed.

“There’s rosemary, that’s for remembrance; pray you, love, remember,” is the famous line spoken by Ophelia in Shakespeare’s Hamlet.

Additionally, the flowers are purple, which has long been a colour associated with royalty.

This dates back to the kings and queens of the ancient world, where the colour was prized for its bold hues and often reserved only for royals and aristocrats.

The Persian king Cyrus adopted a purple tunic as his royal uniform, and some Roman emperors forbid their citizens from wearing purple clothing under penalty of death.

Just after 2pm this afternoon, the Queen’s coffin was taken through the Marble Hall and the Grand Hall of Buckingham Palace, before being carried by the Guard of Honour onto the Gun Carriage.

This is how the coffin will be rolled through the streets of the capital to Westminster Hall.

The royal jeweller placed the Imperial State Crown on the coffin, before it was first placed on a small purple cushion.

The royal florist was the one responsible for the wreath of flowers.