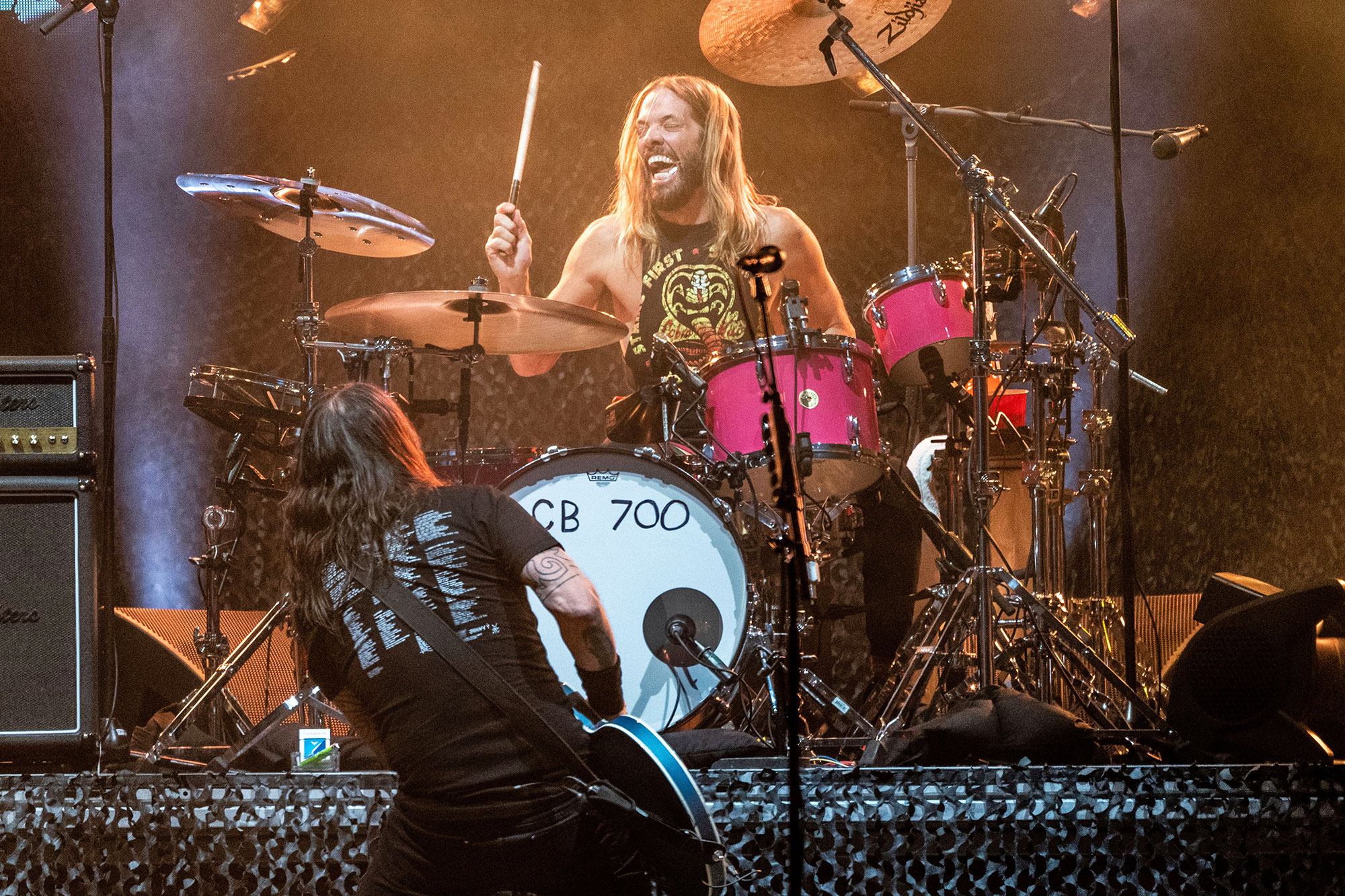 It’s times like these. After the death of drummer Taylor Hawkins, the Foo Fighters are postponing their previously announced live concerts.

Dave Grohl and Taylor Hawkins’ Friendship Through the Years

“It is with great sadness that Foo Fighters confirm the cancellation of all upcoming tour dates in light of the staggering loss of our brother Taylor Hawkins,” a statement shared via the band’s official Twitter account read on Tuesday, March 29. “We’re sorry for and share in the disappointment that we won’t be seeing one another as planned. Instead, let’s take this time to grieve, to her, to pull our loved ones close, and to appreciate all the music and memories we’ve made together.”

The message was signed, “With Love, Foo Fighters.”

Hawkins was found unresponsive in his hotel room in Bogotá, Colombia, on Friday, March 25. Emergency services were called to the Casa Medina hotel, and the musician was declared dead on arrival. Hawkins and his bandmates — including Dave Grohl, Nate Mendel and Pat Smear — had been performing shows in South America. 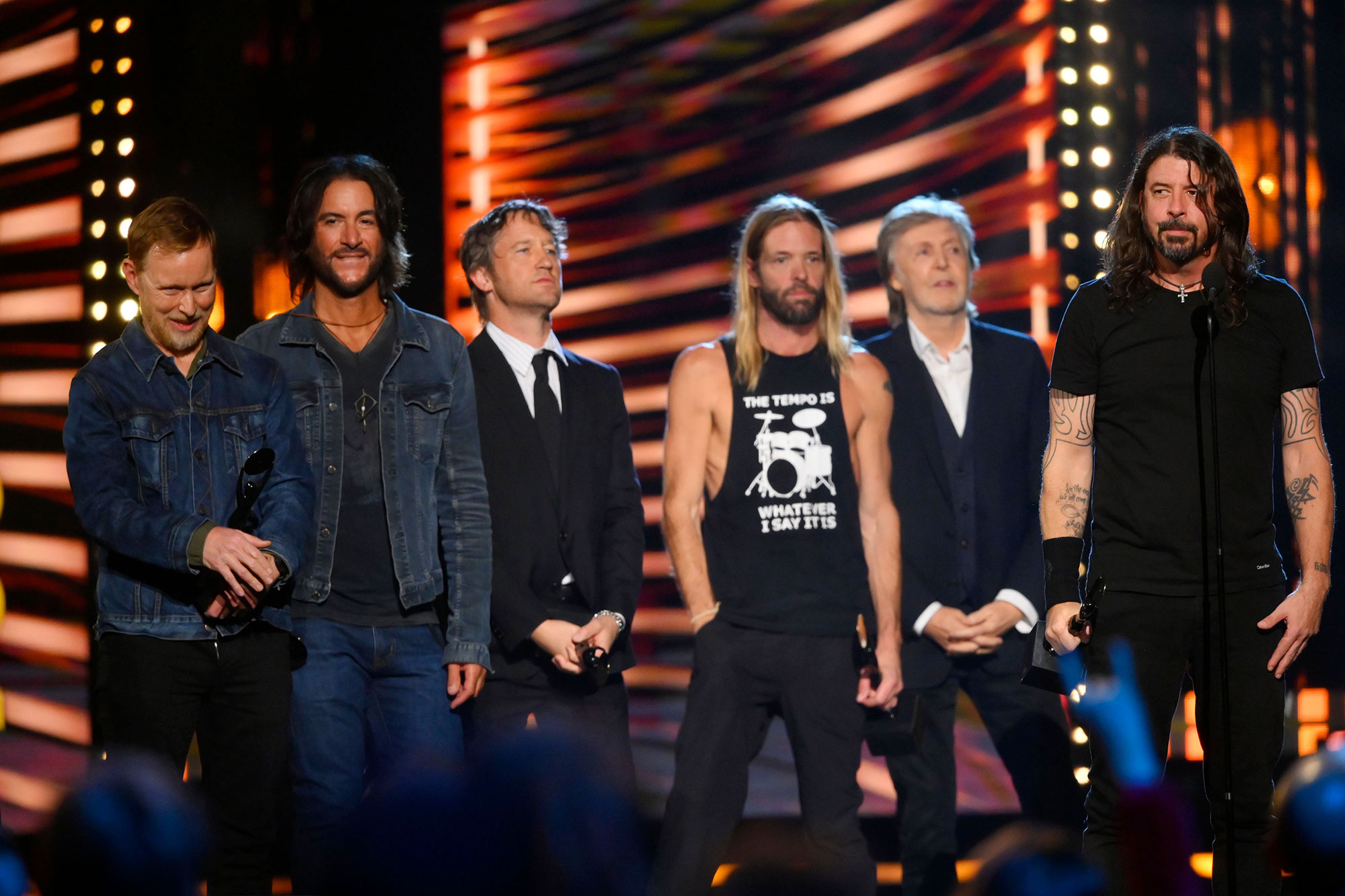 The band is slated to hit the stage at the 2022 Grammys on Sunday, April 3, but have not confirmed whether they will carry on with their performance in light of the tragedy.

An official cause of death has not yet been revealed as the Colombian officials continue to investigate. On Saturday, March 26, the country’s General of the Nation in Fiscalía noted in a statement regarding a preliminary toxicology report that Hawkins had 10 drugs in his system, including opioids, marijuana and antidepressants.

The Texas native, who was inducted into the Rock and Roll Hall of Fame alongside his bandmates in 2021, joined the group in 1997. He is survived by wife Alison Hawkins and their three children: Oliver, Annabelle and Everleigh.

Grohl, 53, has not publicly addressed Taylor’s death with a statement of his own, but the Foo Fighters confirmed the “tragic and untimely loss” via the band’s Twitter on Friday. “His musical spirit and infectious laughter will live on with all of us forever,” the post read. “Our hearts go out to his wife, children and family, and we ask that their privacy be treated with the utmost respect in this unimaginably difficult time.”

Throughout his career, the Taylor Hawkins and the Coattail Riders artist was candid about his struggles with substance abuse. In August 2001, he overdosed on heroin and was left in a two-week long coma.

“I was partying a lot. I wasn’t a junkie per se, but I was partying,” the Grammy winner, who previously drummed for Alanis Morissette, recalled during a 2018 interview on Apple Music’s Beats 1. “There was a year where the partying just got a little too heavy. Thank God, on some level, this guy gave me the wrong line with the wrong thing one night and I woke up going, ‘What the f–k happened?’ That was a real changing point for me.”

Taylor noted at the time that the aftermath of his health scare “looked like the end” for the Foo Fighters. “I don’t think that glamorizing that lifestyle is a good thing — I just don’t,” he added. “I think it’s a bad message. … You gotta be careful, man.”

From Grohl’s perspective, Taylor’s overdose hit close to home. The guitarist was formerly a member of Nirvana alongside the late Kurt Cobain, who died in 1994 at age 27.

“When Taylor wound up in [the] hospital I was ready to quit music,” the Storyteller author told The Guardian in 2011. “Because, to me, it felt like music equaled death. I started praying. I’ve never been to church in my life, and I’m walking back from Taylor’s hospital to our hotel every night, praying out loud in the streets of London. I don’t even know if I believe in God. But I felt like, ‘You know, this is just not right.’ You know, ‘What kind of God would let this [happen]?’”

If you or someone you know is struggling with substance abuse, contact the Substance Abuse and Mental Health Services Administration (SAMHSA) National Helpline at 1-800-662-HELP (4357).