You’ve seen the image of the “perfect” ethical consumer on Instagram. There are lots of macrame bags, maybe a swing on the porch, compost bins and worm farms galore. And linen, lots of linen. And then, there’s most of our reality.

Living more sustainably should be a journey of lots of small steps but experts agree that our “perfectionist” culture has created a “pass or fail” paradigm that can leave consumers feeling overwhelmed and powerless to make changes. 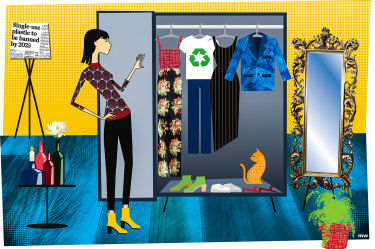 Peter Keegan is director of policy at Baptist World Aid, the not-for-profit Christian development organisation that each year produces the Ethical Fashion Report, which rates brands on 46 categories covering human rights and the environment, resulting in a grade of A+ to F. Today, the organisation is releasing its first consumer report card, which surveyed 2000 people to assess their attitudes to ethical consumption.

Keegan says there is a major gulf between people’s desire to live more sustainably and the actions they take to do so. While 60 per cent of consumers surveyed say they are more aware of the impact of their purchases than three years ago, barriers to shopping more ethically include knowing which brands to choose, and the perceived expense.

Keegan says the intent to purchase more ethically has increased during the pandemic, particularly among Gen-Z and Millennials. He says the pandemic has been bad for workers in poorer countries due to shutdowns and non-payment of wages, but it has increased consumer awareness overall.

“Challenges like child labour, unsafe working conditions and the environment may seem huge but the important thing is not to be overwhelmed,” he says. “Don’t start with perfection, ask what’s the first step we can take, the next action.” 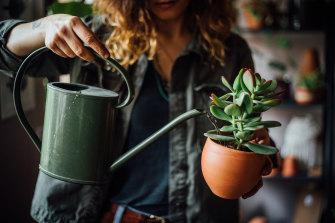 Save and cool your pasta cooking water to replenish your indoor plants.Credit:iStock

On price, he says “you don’t need to go and find the niche ethical brand every time. There are some great [mainstream] brands doing wonderful things.” So while the $4 T-shirt is probably not the best option, there are many, many steps before jumping (or thinking you need to jump) to the $200 one.

Sydney-based postpartum doula, cook and writer Naomi Chrisoulakis agrees it can be incredibly overwhelming to see ethical living through the curated lens of social media. The solution, she says, is “about chipping away. If every person did their own bit … then collectively that can make a change.”

Chrisoulakis began making small changes about five years ago, including placing a bucket in the shower to collect water for her plants, and keeping a dedicated bag for soft plastics that she takes to the supermarket for recycling.

As someone who has worked in women’s magazines, she understands the misconception that only expensive brands can be ethical. But she has sourced “better” options such as organic cotton underwear from Target and bamboo bras from Kmart. She also has a puffer jacket from Cotton On made from recycled plastic bottles.

As the mother of two young children, Chrisoulakis says she has felt pressure to be the “perfect” eco mum – but learnt with her youngest to cut herself some slack, especially when it came to using cloth nappies (which she now only uses in the day time). “Give yourself a break [from the more difficult ethical practices] when you are going through different life stages,” she says.

Researchers Natalya Lusty, from the University of Melbourne, and Lisa Heinze, of the University of Sydney, have studied ethical consumption, including fashion. Lusty’s own 2020 study of “very well informed consumers” still found widespread confusion about the basics of ethical consumption. “Many of them struggled to know, for example, whether organic cotton is really OK, or whether we should not be buying anything that is sourced from such a water-intensive crop. Similar biodiversity issues have been raised about wool,” she says.

Lusty also found consumers found it harder to source ethical clothing for children and teenagers than themselves, as well as some “surprising judgements” about certain retailers. “Many condemned fast fashion and the likes of Zara, but then confessed to buying UNIQLO, when in fact Zara has a better sustainability and traceability record than UNIQLO,” she says.

Heinze says one of the simplest ways to shop more ethically is to simply make fewer fashion purchases, and consider rental where appropriate. “Without worrying about what all of the labels or certifications mean, if we can get to a point where we are buying pieces that we love, that fit well – or can be tailored – and will outlast seasonal trends, we are making an active, ethical choice as a fashion consumer,” she says.

Fashion stylist Anthea O’Connor agrees. She is a big fan of designer re-sale sites and stores, and choosing one investment knit for winter over, say, four “trend” styles. Learning which shapes and cuts best suit your body can also encourage less wasteful purchases, especially when it comes to staples such as jeans. “Wear fewer pairs more often, get use out of them until they are threadbare then update them with a new style,” O’Connor says. “No one needs more than two pairs of the one style.”