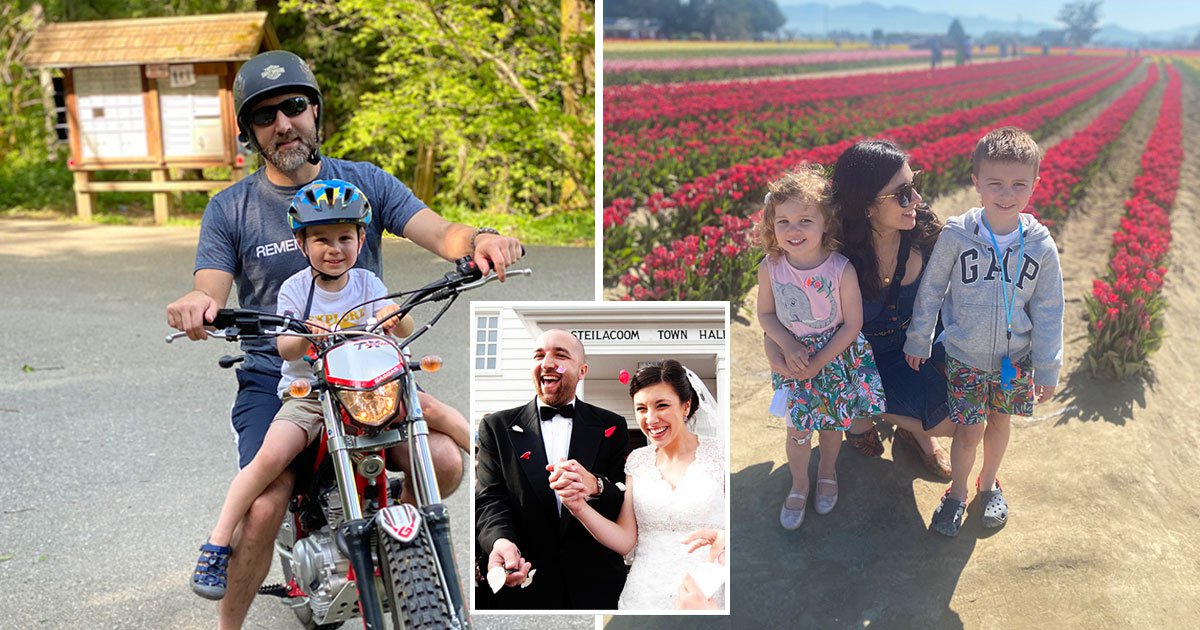 A former CIA operative turned stay-at-home mum says she is raising a real-life ‘spy kids’ family – with her toddler son already riding motorbikes, shooting a bow and arrow and using a knife.

Christina Hillsberg, 36, wasn’t sure about raising children as mini-intelligence officers, but her husband Ryan, 42 – also an ex-spy – had already done the same thing with his three kids from a previous relationship, so she decided to raise their son, Ari, four and daughter Gigi, two, the same way.

The couple – who sound like something out of the movie Mr and Mrs Smith – are using their specialist knowledge to give their kids skills that will certainly set them apart.

Four-year-old Ari is learning how to whittle with a wooden knife, shoots targets with a bow and arrow and is a passenger on his dad’s motorbike, after learning to ride a bicycle without training wheels at just two.

Meanwhile, his independent little sister Gigi has used a mini bow and arrow from the age of two and drives a little dune buggy.

Christina, who is from a small town east of Seattle in Washington State, has even written a book called License To Parent which explains her unusual parenting style – and it is soon set to be turned into a TV show.

Christina wasn’t immediately sold when she saw how her partner Ryan was raising his kids, Hannah now 18, Hunter, 16, and Lena, 14, when they first met in 2012.

‘It did give me some concern as they did seem a little young to be obsessed with surviving end of the world scenarios, archery and motorbike riding,’ she says.

‘You do think, should we not be letting kids be kids? This seems like a lot!’

But over time, Christina began to adopt these espionage techniques too.

‘The CIA trains its employees to be equipped to deal with just about anything,’ she says. ‘Shouldn’t parents strive to do the same for their kids?’

In December 2006, Christina began agency life at the CIA headquarters in Langley, Virginia.

Right away, she found herself working through the night to respond to terrorist incidents or civil unrest – as well as writing briefings for President George W. Bush, and later, Barack Obama.

‘I would read overnight intelligence traffic from my region, attend meetings, and brief the team on developments,’ she recalls.

‘Some days I would be at the White House, with the National Security Council and the State Department and briefing people on sub-Saharan Africa.

‘Other days I might have reports to write or personal profiles on other countries’ leaders. It might be, “Tell me everything you know about election violence in Kenya or a pirated ship in Somalia.”‘

But the most exciting part of her job came when she served overseas at various points during her career – at locations she cannot reveal.

But beyond the work, Christina liked the environment at Langley for another reason too.

‘Dating at the CIA was probably one of the best places to do it,’ she laughs. ‘Everyone’s been through a background check and psychological testing – it’s a dating pool of people who are safe!’

In March 2012 Christina met her perfect agent – divorcee Ryan – at a training day at headquarters, before reconnecting again on a mission in August that same year.

‘He fascinated me – he was one of the most well-rounded people I’d ever met. I was far from put off by his three kids and loved getting to know them all,’ she says.

As the couple dated and grew more serious about a shared future, Christina realised Ryan was incorporating CIA principles into his parenting of his three kids – and she was impressed.

‘He taught Hannah how to persuade Hunter to have cheesecake rather than chocolate cake for his birthday – I knew exactly what he was doing,’ she says.

She was also taken aback when she discovered Ryan had decided to tell each of his kids he was a spy when they turned eight.

But he knew, as he had taught them so much about trust and loyalty, that they would not share that information.

In 2014 the couple married and moved in together with Ryan taking on full custody of his children and gradually, Christina found herself coming round to the idea of parenting spy-style.

‘It’s a mix of clandestine skills – like survival – and soft skills – like communication. It’s things like being prepared, from the every day to the most unexpected, she explains.

‘Packing survival bags with kids, showing them maps and flashlights, teaching them what to do in unsafe situations, how to find help – it’s the same as the CIA preparing its officers for the most difficult and dangerous scenarios while knowing what they encounter is going to be a lot easier.

‘One thing we have done, once we’ve felt comfortable has been to drop the older kids – they were 15, 13 and 11 – off in downtown Seattle with a paper map, letting them go off and explore the city – no cell phones.’

Christina says the end result of this training is capable kids, and adds that it gives them the confidence to fend for themselves and become ‘self-sufficient successful adults.’

In 2015, Christina and Ryan left the CIA, receiving job offers and handing in their notice on the same day.

‘He couldn’t keep flying off and leaving the kids,’ she says, adding that Ryan’s three older children now live with them full-time.

The couple settled in the Pacific Northwest, where Ryan now works for a biotech firm and Christina left her job in information security at Amazon to be a writer and stay-at-home mum.

And when little Ari and Gigi came along in 2016 and 2018, she was fully ready and equipped to begin bringing up her babies as mini-intelligence operatives.

The first things they taught them to do were to pack adventure bags – with Ari taking on four-mile uphill hikes at the age of two.

Christina still has some nerves about some of the more dangerous activities.

‘I’ll admit that watching my four-year-old use a knife or sit on a motorcycle still gives me a sharp intake of breath,’ she says.

And she is still also not quite as gung-ho about safety as Ryan is.

‘We have very different views on knives,’ she adds, explaining that Ari is currently learning to whittle with a wooden, rather than a real knife.

And when it comes to motorbikes, although she lets Ari be a passenger, he is not allowed to ride one solo yet, despite Lena doing so at just five.

Despite some reservations, Christina is sure that her unique approach to parenting is setting them up to be capable individuals.

‘We really are the ultimate ‘spy kids’ family!’ she says.

The couple says they would be happy to see their kids go into a career in intelligence.

Christina says: ‘We just think the CIA a great organisation and a great way to serve our country and keep Americans safe. It was a fantastic opportunity for me to educate people on different parts of the world – it was very rewarding.’

But it is her second career that is attracting independent four-year-old Ari.

She said: ‘Ari did use to say he wanted to be a spy – which was very sweet – but now he tells me when he grows up, he actually wants to be a writer.’

License to Parent: How My Career As a Spy Helped Me Raise Resourceful, Self-Sufficient Kids by Christina Hillsberg with Ryan Hillsberg is published in the UK on June 10th.

Do you have a story to share? We want to hear from you.

Get in touch: [email protected]