Anthony Albanese started the first full day of the 2022 federal election campaign accusing Prime Minister Scott Morrison of chutzpah. It ended in schmegegge for the Labor leader as a couple of numbers brought him undone.

Among the flurry of early morning television interviews that heralded the campaign, Morrison accused his Labor opponent of being unable to manage the budget. 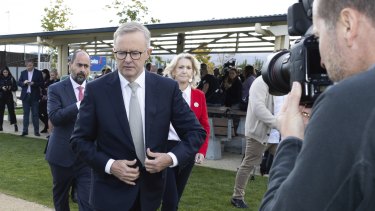 Anthony Albanese departs a press conference after failing to name the official cash rate or the unemployment rate on the first day of the federal election campaign.Credit:Alex Ellinghausen

It was a brave call from a PM who was selling “back in black” coffee mugs before the 2019 election but has since overseen the largest deficits on record and the largest amount of debt in Commonwealth history.

The PM’s commentary prompted Albanese to point to the state of the budget, which shows an $80 billion deficit this year, not much better next year, and debt on its way to $1.2 trillion within three years.

“I give him credit for chutzpah but nothing more thanks because we know with the trillion dollars of debt there is not a real legacy to show for it,” Albanese said.

But just a few hours later, facing questions in a playground on the junction of the North Esk and Tamar rivers in the extremely marginal Tasmanian seat of Braddon, the trillion-dollar talking point segued into an electoral flash flood.

Pressed on Tasmania’s unemployment rate (3.9 per cent), the official cash rate as set by the Reserve Bank (0.1 per cent) and even the national jobless rate (4 per cent), the alternative PM had bupkis.

Memorising the cost of petrol or a loaf of bread – which tripped up Morrison earlier this year – is one thing. But campaigning on jobs and the cost of living means needing to know key indicators of the overall economy.

The cash rate has been at 0.1 per cent since November 2020. When it is increased – and the Reserve Bank will almost certainly do that three weeks after polling day – it will translate into higher repayments for millions of mortgage holders. That’s a real cost-of-living issue.

Having a job, and knowing in which direction the jobs market is headed, is just as important. You can’t cover that increased mortgage repayment without employment and a good wage.

Not knowing the official cash rate or the unemployment rate doesn’t disqualify you from being prime minister. But if your opponent is trying to paint you as not up to the job of managing a $650 billion budget or a $2 trillion economy, then you need to do better than look like a gandz.

Just ask former Labor leader Bill Shorten who, during the first week of the 2019 campaign, couldn’t explain the cost of his climate change policy. It knocked his confidence and Labor’s plans through which Morrison drove a truck filled with those back in black mugs.

Ninety minutes later in the neighbouring marginal seat of Braddon, Albanese tried to “tidy” up his numbers snafu.

“When I make a mistake, I’ll fess up to it, and I’ll set about correcting that mistake. I won’t blame someone else, I’ll accept responsibility. That’s what leaders do,” he said.

It was an apology laced with a political kick to the Morrison shins.

One local, watching the spectacle outside a Devonport bakery, wasn’t too fussed by the debate over cash rates and the price of milk. They shrugged and noted it just seemed like a contest between Albo the “everyman” and Morrison the “adman”.

There’s going to be even more chutzpah from both sides for another six weeks.