In his book Shots, Don Walker tells a great story about Jeff Beck playing pinball at the Bondi Lifesaver in the summer of 1977.

Sometime after midnight, fresh from torching some stage across town, the British guitar god slips into the public bar and starts thrashing the machine in the corner under the forbidding fringe of his ’60s mod haircut.

“He hunts alone, no entourage, acknowledges nobody and in time leaves alone too,” the Cold Chisel songwriter observes from a respectful distance. Those words and that image feel like a poetic epitaph as the lone wolf electric guitar maestro makes his shock final exit this week, aged 78, after a sudden onset of bacterial meningitis. 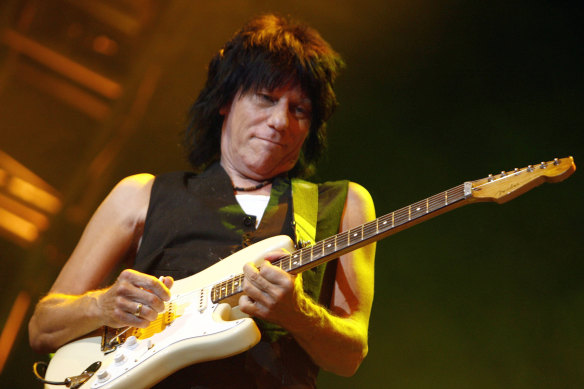 “I’ve just had a kiss of fame on the cheek and that’s it,” Beck told me on his next tour of Australia, a full three decades later. “I wouldn’t have had it any other way, really. The anonymity is not a bad thing.”

Beck was anonymous to no-one with any investment in rock history. He meant that he’d eluded the pop spotlight that burned fellow Yardbirds alumni Eric Clapton and Jimmy Page; and kids like Rod Stewart and Ronnie Wood, who he’d given a leg up on those dazzling early Jeff Beck Group albums (which, some say, invented Led Zeppelin).

The upshot was a rare, compelling, utterly self-contained quality I imagined I saw captured in photos of the time. Coiled over his unplugged Gibson in a LA hotel room with the TV flickering in that classic Baron Wolman shot from ’68, Beck seemed to burn with pure inspiration, oblivious to the camera’s eye or anyone else’s. More cosmic receiver than star.

For ’70s kids like me, part of his mythology was that he’d acquiesced to join upstart fanboy David Bowie at the last Ziggy Stardust show in 1973, then insisted he be cut from the film. “When I saw the footage I was so embarrassed because I had these shitty white shoes on with platforms and there was no way I was gonna let anyone see that,” he told me.

Then there was the time Mick Jagger recruited him for his solo world tour of 1989. “It ain’t gonna be no Jumping Jack Flash from me, I can tell you that,” he warned Jagger at the outset. “We rehearsed for three solid weeks, then the set list appears on the floor and it’s got Jumping Jack Flash on it. There was a puff of smoke and that was me, gone.”

Drummer Nick Mason’s autobiography claims that Pink Floyd had wanted Beck too, when Syd Barrett started zoning out circa ’67, but “none of us had the nerve to ask him”.

Beck was no scary recluse. Not really. He just seemed one by comparison, especially when he absented himself with prescient dignity from much of the 1980s, choosing to work on his beloved hot rod collection in his East Sussex estate while his peers paraded their embarrassing shoes on MTV.

Not every album that followed was a keeper. In the recording studio, fashion has a way of insinuating itself between inspiration and expression. “Techno is not for me,” he decided. “I did it for a couple of tours and I felt, ‘Why would I make people listen to a bunch of machines with me playing on top of that?’”

Alone with his guitar, all was always right in Jeff Beck’s world. When I read the news today (oh boy), his version of A Day In The Life, an eye-watering highlight of his Australian tour of 2009, sprang into my head as a perfectly realised, impeccably articulated, totally unaccompanied solo piece. When I checked it out on YouTube, I realised he had a stellar band behind him the whole time. In my head, he’ll always be up there shaking that machine alone.