Gabriele Grunewald, the elite runner who gained the support of thousands of followers on social media for her perseverance in competing while facing a rare metastatic cancer, died on Tuesday in Minneapolis, where she lived. She was 32.

The cause was complications of cancer, said her husband, Justin Grunewald, who confirmed her death.

In the blur of professional athletes racing one another, it was easy to spot Grunewald: A scar, crimson and hook-shaped, stretched 13 inches across her abdomen. It was a constant visible reminder of the illness and procedures she endured.

The cancer that interrupted her athletic goals emerged in 2009 and would return over the next decade in various forms.

The first of her operations, for a tumor in her neck, damaged a facial nerve that changed her smile forever. Even though she said it made her cringe to look in the mirror, she smiled often — especially at starting lines.

As she openly chronicled her experience with “this challenging-professional-runner-battling-cancer-journey,” she found a community of runners of all abilities; they credited her for inspiring them on the track and she derived strength from their support.

“Brave Like Gabe” became her motto, and the name of a foundation she started for cancer research.

She considered her scars a sign of her ability to handle adversity and encouraged others on social media to do the same.

“My scars represent survival,” she wrote on Facebook this year. “My scars teach me to embrace my body and honor its strength. My scars are a physical manifestation of what often feels like an invisible disease. My scars tell my life’s story, and I’m pretty glad it’s not over yet.”

Gabriele Anderson was born on June 25, 1986, in Perham, Minn., about 200 miles northwest of Minneapolis.

She was a walk-on with the running teams while studying at the University of Minnesota. Getting faster each year, she transformed herself into an N.C.A.A. all-American in the 1,500 meters in her last collegiate race, despite receiving another diagnosis of cancer.

She first learned she had adenoid cystic carcinoma, a rare cancer of the salivary gland, on the day before a race in 2009. (She ran anyway, and logged what was then her fastest 1,500-meter time.) She learned she had thyroid cancer in 2010, but she kept getting faster. She spoke little of her diagnosis during that time, preferring to focus on her progress on the track. 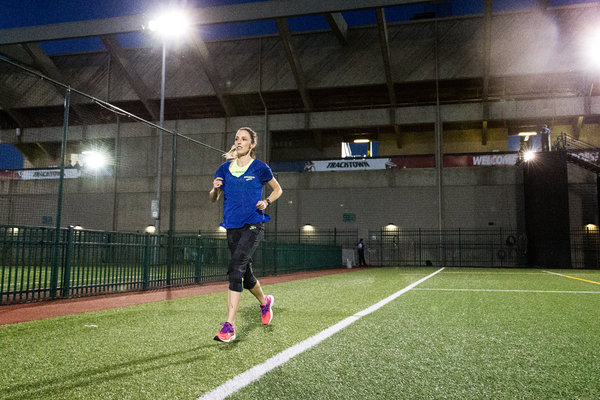 After graduating from college in 2010, she decided to become a professional athlete, competing as a middle-distance runner even as she was aggressively treated with chemotherapy and operations to have tumors removed.

In 2012 she ran in the Olympic trials, failing to qualify by one spot, finishing fourth.

And in 2014, she won the United States’ indoor national championship in the 3,000 meters.

But the adenoid cystic carcinoma recurred in 2016 and 2017, and she decided to tell her story publicly, even though sharing came with its own set of challenges.

“I’m a young adult with cancer,” Grunewald told The New York Times in 2017. “I don’t always love talking about it. It’s not a made-for-TV movie. It’s real. It’s scary.”

In 2016 she raced for a place in the 1,500 meters in the Rio Olympics. She made it to the finals of the United States trials.

There were graver challenges: Shortly afterward, she discovered a new mass on her stomach, and surgeons cut a large tumor out of her liver. By 2017, they found new tumors, and she began interspersing chemotherapy sessions with training sessions — racing at an elite level while on her fourth bout with cancer.

Still hoping to recover, she began training to qualify for the 2020 Olympics in Tokyo.

“Being brave, for me, means not giving up on the things that make me feel alive,” she wrote on the website of her cancer research foundation.

She married Justin Grunewald, a marathon runner she met in college, in 2013.

“I was slightly nuts,” she told The Times. “I kept telling him, ‘I don’t want you to stay with me just because this is a sad story!’”

But he proposed soon after.

In addition to her husband, she is survived by her father, Kim; her mother, Laura; her sister, Abby; and three brothers, Zack, Caleb and Ben.

Even this month, her doctors said she was expected to die imminently. Her husband passed the news on to her. “Not today,” she responded, and she managed to continue a little while longer.

After her cancer had returned yet again, she told The Times: “I was hoping it would not come until I was 40. I wanted to get a little more of life in first.”