Adam Bandt appeared supremely confident only weeks ago when he claimed he was the main challenger to the Liberals by naming Josh Frydenberg as one of his targets in this election campaign.

“It is true the Greens are the real opposition to Frydenberg’s illiberal Liberals,” Bandt wrote in The Australian in February when describing the Treasurer’s electorate of Kooyong as a contest between the Greens and the Liberals. 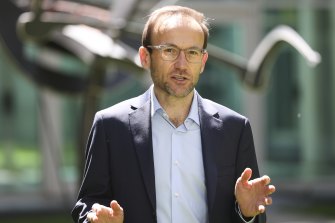 Greens leader Adam Bandt recently named Josh Frydenberg as one of his targets in the election campaign.Credit:Alex Ellinghausen

But the Greens leader is more focused now the real campaign is about to start and the extraordinary power of the independent movement, especially the teal-coloured candidates backed by Climate 200, is sapping attention from the party that thought it owned climate policy.

Bandt and the Greens used to name nine target seats in the lower house in the inflated hope they could mess with both major parties and seize the balance of power or even form a minority government with Labor.

Those targets still include Kooyong as well as Higgins in Melbourne but the party talks much more about other goals these days. Interviewed for this publication on Wednesday, Bandt said the focus was on three Labor seats – Griffith, Macnamara and Richmond – and two Liberal seats, Ryan and Brisbane.

The ground is shifting under everyone in the lead-up to this campaign. Scott Morrison thought he had a chance to turn the tables on Anthony Albanese a few weeks ago when the Labor leader had to manage the bullying claims that surfaced after the death of Victorian Senator Kimberley Kitching. Now the Prime Minister is under scrutiny over his character after a ghost from his past, Michael Towke, levelled claims of “racial vilification” that Morrison denies. 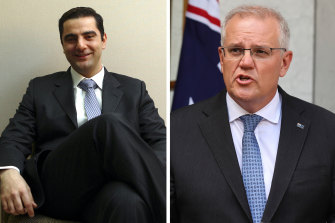 Things speed up without notice on this political treadmill.

For all the focus on the two major party leaders, the rest of the field is also in flux when the Greens have to contend with the teal independents while Clive Palmer’s United Australia Party and Pauline Hanson’s One Nation fight over the spoils (or possibly scraps) on the right.

Labor is seething at some of Bandt’s tactics. In Macnamara, for instance, Labor MP Josh Burns says the local Greens campaign barely mentions Morrison. “The world that makes sense to Adam Bandt is taking votes off Labor, while my focus is to try to defeat Scott Morrison,” he says.

The arrival of Climate 200 as a major force in this campaign, using a centralised funding model without the formality of a political party, is an experiment on a scale we have not seen in living memory. In most cases, it seeks to replace Liberal men with independent women, so its primary target is Morrison and his government. 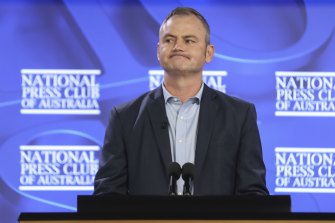 In doing so, however, it has shoved the Greens out of the way.

Kooyong, for instance, has seen a surge in the number of volunteers and donors behind Monique Ryan, the neurologist who wants to tear down Frydenberg. It is a long shot because Frydenberg is a popular minister and a proven campaigner with untold donors and supporters on speed dial, but the “Mon mania” is reaching levels the Greens could not have dreamed of with Julian Burnside in Kooyong three years ago.

Behind this is a fundamental decision by Climate 200 founder Simon Holmes a Court. He chose not to throw his financial support behind the Greens and to find another vehicle to change the game.

Bandt says the Greens are on target to raise the funds they need for this campaign and to have volunteers on every key polling booth, and he is urging voters who like the teal candidates in the lower house to back the Greens in the Senate.

There is a reasonable chance this could work in the chamber where they want the balance of power. Bandt thinks the party can keep all its Senate positions and gain three – one each in Queensland, NSW and South Australia – so it will increase from 9 to 12 in the upper house.

The problem? In the long jump of election campaigns, the Greens run fast and leap high but often fumble the landing. The party has failed three times to surpass its performance at the 2010 election and now has some very tall and fit competitors.

One basic measure of the party’s performance, its national primary vote as a group ticket in the Senate, picked up at the last election but remains lower than the glory days of the past. The first preference vote by group rose 1.4 per cent to 9 per cent at the 2007 election when Kevin Rudd swept to power, proving Labor and the Greens can both prosper when a Coalition government falls.

With Labor eating itself alive in the next term, the Greens rose to 13.1 per cent on the same national measure at the 2010 election, bringing influence over Julia Gillard’s minority government, yet this slumped to 8.7 per cent at the 2013 election and the same in 2016. Only at the 2019 election did the recovery come with an increase to 10.2 per cent.

It has been a long time since the party achieved its personal best under its former leader, Bob Brown. Its challenge at every election is to mobilise voters on climate when other issues crowd the field.

Even when the Greens try to run on other issues beyond climate, operating like a cluster of interest groups, the impact is modest. This year’s campaign appeals to voters on standing up for transgender rights, imposing taxes on millionaires, cancelling student debt, creating a national integrity commission, setting a minimum payment of $33,120 a year for everyone on income support, signing a treaty with First Australians, limiting outsourcing and restoring public service jobs.

While the diversification may work this year, the Venn diagram of the Greens base suggests all these groups form the same circle. The slices change, the pie stays the same.

The teal independents have a simpler campaign with three big themes: climate, integrity and women. Many of them are less ambitious than the Greens on climate, with Ryan telling Kooyong voters she wants a 60 per cent cut in carbon emissions by 2030 when the Greens have set a 75 per cent target for that year. Yet, the independents talk tougher on climate than Labor and the Liberals, and this is what counts.

The message from the independents on integrity is no different to the Greens – set up a commission with real power – but it is louder because it is not crowded out by so many other ideas. The Greens may be at risk of repeating Labor’s mistake at the last election in having too many policies. And the party’s internal spat in Victoria on transgender questions, after Rohan Leppert voiced an opinion, highlights the challenge of keeping the party together.

And equality for women? The independents cut through on this issue like nobody else because what they do sends a louder message than what they say. The independents backed by Climate 200 are all about replacing men with women in Parliament.

The main challengers and their targets are: Nicolette Boele against Paul Fletcher in Bradfield, Zoe Daniel against Tim Wilson in Goldstein, Claire Ferres Miles against Aaron Violi in Casey, Monique Ryan against Josh Frydenberg in Kooyong, Sophie Scamps against Jason Falinski in Mackellar, Allegra Spender against Dave Sharma in Wentworth and Kylea Tink against Trent Zimmerman in North Sydney.

The approach is being tried in at least three regional seats against the Nationals but not, curiously, against Barnaby Joyce.

Only in two seats are the teal independents trying to defeat Liberal women. Kate Chaney is challenging Celia Hammond, the sitting MP in Curtin in the suburbs of Perth, and Despi O’Connor is running against Zoe McKenzie, the new Liberal candidate for Flinders where Greg Hunt is departing after 21 years. These two contests will be interesting to watch because they break with the usual Climate 200 formula.

There is more at stake than the fate of Morrison or Albanese. Over in another part of the field, Bandt is running fast and leaping high. He may land on his feet. Or his face.