American rapper Azealia Banks let her music do the talking at a re-scheduled Melbourne show on Sunday night, after last week declaring this Australian tour would be her last. 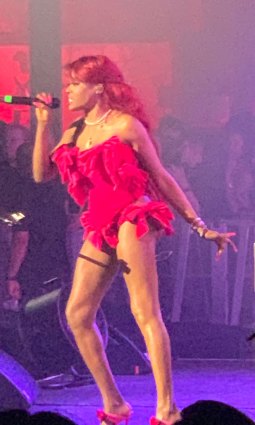 The 31-year-old soaked up the adulation of 1300 fans at Port Melbourne venue The Timber Yard, eight days after her original Melbourne concert on December 10 was cancelled just hours before it was due to begin – caused by a visa delay, according to tour organiser Point Productions.

Soon afterwards, Banks posted on Instagram that there would be no re-scheduled Melbourne show, but a new show was announced on Thursday.

After the delays and drama off-stage, Sunday night’s Melbourne show was a commanding, self-assured performance from Banks, featuring hit song 212 and a string of crowd favourites.

Her scheduled 9.30pm start time came and went, while two DJs pumped up the crowd with dance beats. Banks eventually strode on stage at 10.24pm amid tight security and rousing applause, and barely spoke between songs. While a DJ on stage behind her worked his decks, Banks worked the crowd, strutting and smiling for the hundreds of pictures being snapped on mobile phones.

Banks was dressed in pink with a large pink ribbon in her hair that she later tossed into the crowd, predominantly aged their late teens and early 20s, and well-behaved.

Purple lights bathed the stage and audience during her set, which opened with a feisty version of 2012 song Aquababe and finished 37 minutes later with The Big Big Beat.

The controversy around Banks last week, when she posted on Instagram that “this place makes me utterly miserable,” appeared to be behind her as she revelled in the spotlight.

After performing at Sydney’s Enmore Theatre on December 11, Banks cancelled last Tuesday’s show in Brisbane, referring to a previous bad experience on stage there when a “bottle of soda or whatever” was thrown at her.

“That was the most racist, most demoralising experience of my f—ing life,” she said in a video posted to Instagram.

Banks later said her Brisbane show would go ahead, under strict safety measures with “any and everything that can be considered a projectile checked in at coat check,” but soon afterwards the show was cancelled.

Brisbane Lord Mayor Adrian Schrinner then weighed into the matter, posting his own comments on Instagram after Banks pulled out of the show and tour promoters advised Brisbane ticket holders they would be refunded.

“A few stupid ratbags in a mosh pit aren’t representative of our proud multicultural city, where around 1 in 3 residents were born overseas,” Cr Shrinner wrote.

“I encourage anyone who has been let down by Azealia’s selfish snub to instead support some of Brisbane’s incredible local acts.”

Melbourne ticket holders who hung onto their tickets for Sunday’s re-scheduled show were all smiles as it ended in another huge round of applause – even without an encore.