Matthew Guy would no doubt bristle at the suggestion, but his strategy to win the November 26 state election differs little from the one adopted by Anthony Albanese to win the coming federal election.

The Trump-era approach of lobbing Molotov cocktails from opposition in the hope this will derail an incumbent has probably passed its used by date.

It worked for Tony Abbott in 2013, and to some degree for Daniel Andrews in 2014. But it feels like voters have wised up, and now seek stability, decency and integrity. 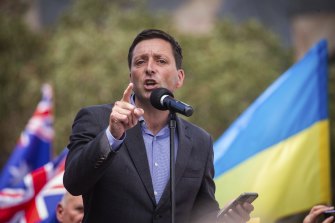 The new ethos for opposition is, remove as much daylight as possible in most policy areas, campaign hard on a few others including trust and integrity, make yourself a small target, and play the man.

How is this approach manifesting in state politics?

First, the opposition is promising to boost funding for Victoria’s ombudsman and integrity watchdog to rebuild a “system of integrity and honesty in government”.

It has some material to work with here, including recent revelations in The Age that Andrews has been secretly interviewed as part of Victoria’s Independent Broad-based Anti-Corruption Commission investigation into the allegations of factional branch-stacking.

The Victorian Ombudsman is also investigating whether the state bureaucracy has been stacked with Labor insiders.

With trust and integrity now core issues for many voters, Guy is promising IBAC would regain clout to run public hearings, and the two integrity agencies would get more funding.

“We want to give respect back to those integrity watchdogs – that’s what Victorians expect us to do,” Guy declared recently.

That promise also follows a slew of allegations about misconduct in the Morrison government, and reports about the misuse of public resources for political purposes.

Second, Guy is looking to match Labor on health to neutralise its advantage. Liberal strategists acknowledge Labor may have an inherent political edge in this area, but they think this time could be different given the extreme pressure on the hospital and ambulance system after more than two years of pandemic.

Guy is, for example, promising to start building a new hospital in Melton in Melbourne’s booming west within 12 months of winning. Labor has also promised a new Melton hospital, worth between $900 million and $1 billion (although it hasn’t mapped out funding in the budget).

Guy is pledging to halve surgery waiting lists in his first term, while Labor has also announced a major blitz to tackle the enormous backlog.

The Coalition also recently appeared to walk away from an earlier pledge to repeal Labor’s $800 million a year mental health levy, although in a recent interview when specifically asked about the levy Guy said the Coalition was looking at whether it could responsibly repeal “a number of taxes” in the budget.

A third part of the Liberal strategy involves zeroing in on Daniel Andrews himself. Just as federal Labor has homed in on Scott Morrison’s character, Liberal people insist the premier has become an electoral drag, particularly in Labor’s heartland territory to Melbourne’s west, and in federal seats such as Dunkley, McEwen and Corangamite.

Curiously, the idea that Andrews is an electoral drag has cropped up in the federal campaign.

The Liberal Party has, for example, been running attack ads depicting Albanese as Andrews’ puppet in an effort to link the two men (who have indeed known each other for decades and are both from the same socialist left Labor sub-faction).

“Hello little puppet, Albo,” a stylised Andrews says in one ad to a ventriloquist’s dummy version of Albanese. “You stand for everything I stand for.”

Undeniably, a section of the community continues to direct fury at the premier over the long coronavirus lockdowns and restrictions of 2020 and 2021.

But the attempt to link negative perceptions about Andrews’ character to Albanese is an attack strategy that has left federal Labor strategists scratching their heads.

It could just be a “stab in the dark” attempt to mop up a rump of angry undecided voters who may or may not make a difference in some marginal electorates.

But another explanation is that the focus on the premier’s character is designed to set the scene for the state election, which is now just six months away. This too, is straight out of the federal Labor playbook.

The idea is to get under Labor’s skin well ahead of November, and zero in on the premier’s character.

In other words, it’s all about playing the man. Meanwhile, voters have been left with very little in terms of policy choices between the two big parties.