Yes, it really is that good.

How better to depict the American Revolution than with a hip hop musical theatre revolution? The words fly at you like grapeshot from a cannon, but from the moment you adjust to their velocity the history becomes the present, so you ride the raps as if on a jet-stream, and the zinging cleverness of the rhymes (“doing this/ruinous”; “jettison/debt is in”; “harem/share ’im”) makes your brain buzz like a hive. 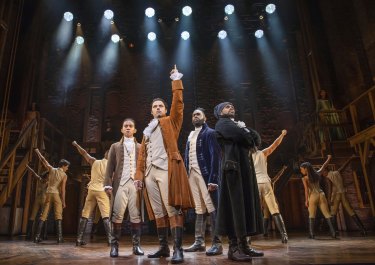 Thrilling: Hamilton cast light up the stage at the Australian premiere of the hip hop musical. Credit:Daniel Boud

That cleverness is the perfect shorthand for characterising one who was both loquacious to the point of being prolix and a towering intellect.

Alexander Hamilton rose from the gutter in the Caribbean to become as influential as anyone in shaping what became the United States.

In a life less than 50 years long he was a master of military stratagems, political essays, legal arguments, constitutional arrangements, banking systems and the streamlining of currencies. He also featured in the country’s first political sex scandal. 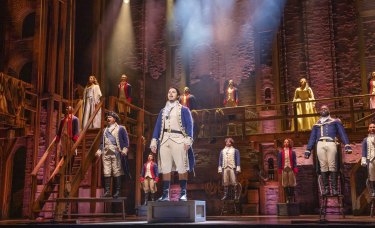 Jason Arrow and the Australian Hamilton cast at the performance premiere in Sydney on Saturday night. Credit:

The brilliant Lin-Manuel Miranda not only wrote the words and music, he originated the title role in New York, so each successive Hamilton has the show’s creator looming over him.

Jason Arrow shrugs that shadow aside and hits the bullseye of a devilish part – not only because of its immensity, but also because the character is not inherently sympathetic.

Hamilton was cocky and impatient for his greatness to be recognised, so Arrow has to win us over with some cracks of vulnerability, while convincing us of Hamilton’s dazzling intelligence. He does all that and more.

It’s a level of excellence that runs like a river of gold through the writing, performers (including Chloe Zuel as Eliza, Lyndon Watts as Burr, Akina Edmonds as Angelica and Victory Ndukwe as Lafayette and Jefferson), musicians, design team (including Howell Binkley’s phenomenal lighting), choreography (Andy Lacamoire) and direction (Thomas Kail).

Hamilton is both high art and thrillingly entertaining, and don’t despair if you have yet to see it, because the cast will only get better.