Jane Jericho is flipping through her little black book.

“We had a little game a few weeks ago,” she says. “The dressers all pitched in to find out how heavy it was and I brought in my suitcase scales.”

She stops at a page, having found what she’s looking for.

Jericho is talking about a wedding dress, but not just any wedding dress – it’s the one that belongs to Muriel Heslop, the wayward heroine of Muriel’s Wedding the Musical, the one she wears as she walks down the aisle, her miraculous transformation from nobody to somebody complete. 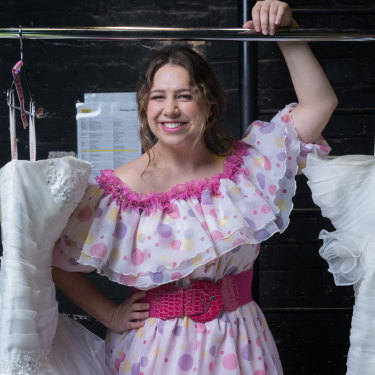 Natalie Abbott, who plays Muriel Heslop in Muriel's Wedding the Musical, backstage with a selection of the show's 30 wedding dresses.Credit:Simon Schluter

“There’s two crinolines underneath it, which are those boned, hooped skirts,” says Jericho, who is head of wardrobe on the production. “And then we’ve got a base layer that’s full of a synthetic horsehair, which is quite a heavyweight weave, and then we’ve got three tiers of ruffles, and they’re three layers thick. So both the top skirt and each layer is three [layers of ruffles].”

The dress is so large that it lives in the flies of Melbourne’s Her Majesty’s Theatre, hoiked up like the ghost of weddings past, looming over the backstage area, ready to put the frighteners on any unsuspecting groom.

It is one of 1200 costumes featured in the musical, which is adapted from the 1994 film Muriel's Wedding that turned Toni Collette and hapless Muriel Heslop from Porpoise Spit into national treasures overnight.  But it’s the organisation and maintenance of those costumes – everything from bras and bikinis to shiny suits and sequinned ABBA onesies – that’s the real showbiz miracle, a mixture of backstage magic and invention that never stops.

To the untrained eye, the changing area at the theatre looks like the type of thing that would give Japanese tidying guru Marie Kondo a nervous breakdown: three double-sided rows are crammed with costumes; swimmers are squished against frocks, boardshorts rub up against police uniforms. Shoes are tossed in plastic tubs, coathangers dangle on angles.

But, if you look closer, there is order among the chaos. There is, as Mary Poppins is wont to say, a place for everything and everything has its place. Each item is labelled, as are the plastic tubs filled with shoes and accessories, which sit under labelled chairs. Wigs are pinned on labelled foam heads, while an adjacent dressing room is stuffed with the 30 wedding dresses on rotation in the show. 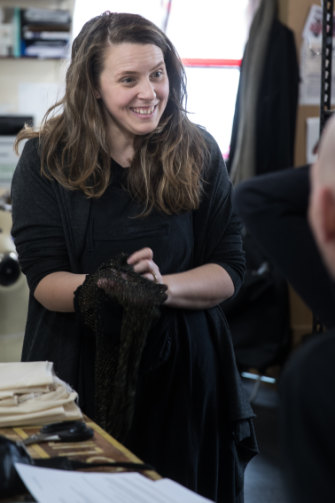 This is where Jericho and her team of dressers come in. Before each show they preset baskets filled with costumes all over the theatre, which are placed in the same spot for every performance without exception. That way the actors, in the haste of a scene change, can find their next outfit pretty much without thinking.

“So it’s not just a matter of having a backstage track, where you go from point A to point B and help someone to do that and pick up that thing, you also put something on that spot every single time you do that change.”

“The performers really appreciate the security of knowing that everything will be the same every time and they don’t have to think about that element,” says Jericho. “They just go and do what they need to do. That’s important, too.”

Vodka, eucalyptus and a few other chemicals I won’t tell you about

Jericho’s work, however, doesn’t stop there. About halfway through each show, she will start maintenance for the next one, such as repainting shoes, washing, drying and ironing, as well as fixing any mid-show emergencies such as split pants.

What it also means is that she is an expert in the dark art of keeping whites white, particularly when you’re dealing with a froth of bridal dresses that cover every shade of white on the Dulux colour chart.

“Because we have a lot of veils, we get a lot of lipstick on them because they’re over the performers faces for the first part of that scene,” says Jericho. “So what we’ve been doing is soaking them overnight in micellar water [cleansing water you buy in the make-up aisle of the supermarket], Sard and a gentle wool wash.

“We let them soak overnight and by the morning the lipstick has been lifted and they are available to get on with the next show.” 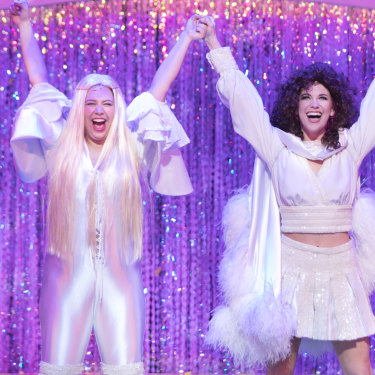 Of course, with so many costumes, it’s impossible to clean every one, so many are disinfected instead with a home-made spray that includes vodka, eucalyptus “and a few other chemicals I won’t tell you about”, says Jericho.

Does that mean there are bottles of Smirnoff stashed under the laundry tubs?

“Cheaper than that,” says Jericho, laughing. “It’s not the stuff you want to drink. It’s dreadful.”

For the touring production of Muriel’s Wedding the Musical, about 40 per cent of the costumes are brand new, while the rest were recycled from the original 2017 Sydney Theatre Company production.

Set and costume designer Gabriela Tylesova also did a wardrobe refresh, updating a few items, such as Muriel’s final bow dress, to keep the show looking kitschy but current.

Most of the 139 wigs in the show were also adapted from the Sydney production, except for those belonging to the lead actors, which were all made fresh in London by Campbell Young Associates.

“It’s a very large amount of wigs,” confirms Dynae Wood, the production’s head of wigs and make-up. “That’s including the understudy wigs, but that means 113 wigs go on stage every night.”

Some of the 139 wigs used in Muriel's Wedding the Musical.Credit:Simon Schluter

Before each show, the wig team brushes and styles each wig, from Bill’s Heslop’s slick combover to mum Betty’s droopy perm.

“I’ve also got some in the oven right now, doing a good old wet set,” says Wood, before opening the door of bar-fridge-sized cupboard filled with heads.

So instead of having bodies in the freezer, you’ve got heads in the oven?

While Wood and her team now have each wig change down to a fine art – the production will have racked up 108 performances in Melbourne this weekend before moving to Sydney at the end of this month – the real challenge comes in doing it faster each time.

“It’s easy but you’ve got to be skilled at it,” says Wood. “We had one change which at the beginning took 35 seconds to get it done, and that’s including the costume, shoes and everything, and now we generally sit around 20 seconds, but we made a PB the other night of 15.”

The one person who is at the centre of this storm is Natalie Abbott, who like Maggie McKenna in the STC production, made her professional debut in the role of Muriel. 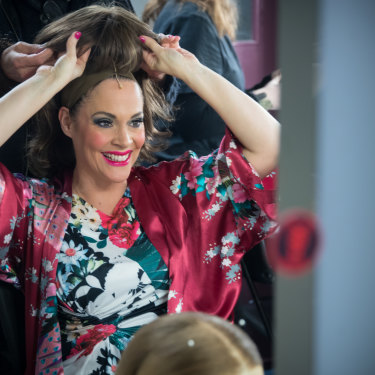 Sitting in her dressing room ahead of a Wednesday matinee a couple of weeks ago, Abbott is buoyant despite feeling a little flat.

“To be honest, I’m a bit tired this week and it’s because my body knows we’re coming up to 100 shows,” she says. “My goal was to get to 100 because the most I’d done before this was 15, and that’s in the space of three weeks as opposed to eight shows a week, which is a lot.”

On show days, Abbott arrives about half an hour before warm-up and gets started on her make-up. After warm-up, Wood comes down to her dressing room and pins her hair before putting on Abbott’s wig cap and then the first of Muriel’s wigs. A microphone is also attached.

Her dresser Kerbie Minor, the deputy head of wardrobe, will then help her do her bra up (“That’s really too much information,” says Abbott, laughing, but I can’t do it up by myself”), then she’ll finish getting dressed and then it’s showtime.

“A lot of people bring up the pressure thing,” says Abbott. “But I almost feel like pressure has never been put on me to do it. I understand it’s such a massive role, such a pivotal role in Australian culture, but not even [writer] PJ Hogan has ever been like, ‘If you don’t do this right, Australia’s going to hate you.’ Everyone’s been so incredibly supportive.”

What does she think happens to Muriel once the curtain goes down?

“I think she and Rhonda are best friends forever. She dates Brice, but doesn’t marry him. She is just so content with being herself.”

That doesn’t sound so terrible, does it Muriel.

Muriel’s Wedding The Musical is Sydney Lyric Theatre from June 28.