Brittany Higgins said she kept the white cocktail dress she wore when she was allegedly raped in a plastic bag beneath her bed for six months “untouched, uncleaned” because she didn’t know whether she could raise the incident without losing her job.

The former Liberal staffer also told an ACT Supreme Court jury on Wednesday morning she was phoned by an Australian Federal Police during the 2019 election, months after the alleged incident, asking if she was being pressured not to come forward, “and at the time I denied it”. 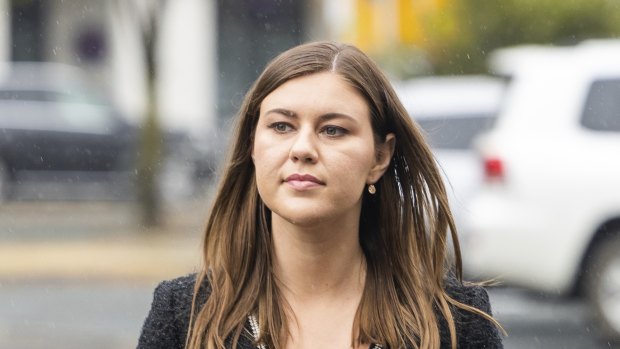 Brittany Higgins arriving at the ACT Supreme Court in Canberra on Thursday for the third day of the criminal trial.Credit:Alex Ellinghausen

Police allege Higgins was raped on the couch of then-Coalition minister Linda Reynolds’ parliamentary office by her senior colleague Bruce Lehrmann in the early hours of March 23, 2019, after a drunken night out with workmates.

The court was shown photos of the office, and the couch, on which Higgins said she was “jammed up into the corner” by Lehrmann, who had her left leg pinned down and her right leg pinned up “like a prop.”

Shown a photo of the cocktail dress she had been wearing that night, Higgins was asked by Crown prosecutor Shane Drumgold what she’d done with it following the alleged assault.

“I kept it under my bed in a plastic bag for a good six months, untouched, uncleaned, I just had it there,” Higgins said. “I wasn’t sure because of all the party political stuff how I could progress or whether I could proceed without losing my job. I just kept it there. It was like an anchor for me.

“Once it was clear I couldn’t proceed, I very symbolically washed the dress, and I’ve worn it once more since.”

Higgins and Lehrmann were part of a larger group of colleagues who started drinking at The Dock bar in Kingston on the night of March 22, before a smaller group progressed to another bar called 88mph, the court was told.

The court heard that when that group dispersed, Higgins and Lehrmann decided to share a cab, and that Lehrmann had said he needed to drop by parliament to pick up some documents. 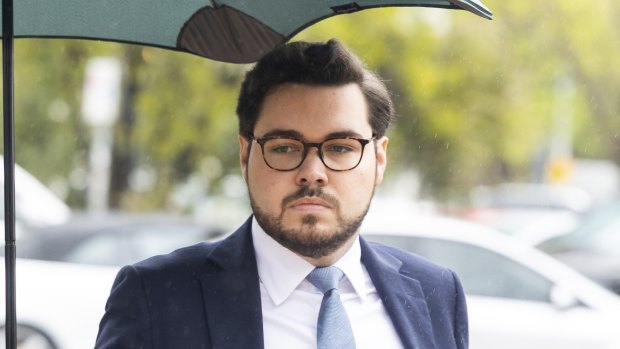 Higgins sobbed in court as she watched footage of herself unable to put her high heels back on after passing through parliamentary security at 1.44am because she was too drunk. Visibly upset throughout the airing of the CCTV footage, Higgins was asked by Crown prosecution Shane Drumgold about her level of intoxication.

“I don’t remember any of this, so it was pretty high,” Higgins said as she sat in the witness box. Lehrmann, who was also seen in the footage, arms crossed at the security point, waiting for Higgins to step back into her shoes.

She was unable to do so, and the jury was shown another clip of Lehrmann, a female security guard, and a barefoot Higgins carrying her high heels in one hand as the trio walked down a carpeted corridor to the then-office of former Coalition minister Linda Reynolds, where Lehrmann and Higgins were let inside.

Lehrmann has pleaded not guilty to a count of sexual intercourse without consent, being reckless as to whether Higgins was consenting. He denies he ever had sex with her.

The jury was shown another photo: one taken by Higgins several days after the alleged incident, showing a red mark on her thigh. Standing up in the witness box, Higgins said the bruise appeared to be on her right leg.

Shown a text exchange between her and her ex-boyfriend about the alleged ordeal, in which Higgins spoke about being contacted by the AFP during the 2019 federal election, Higgins described the contact as a “pulse check”.

“[They were] asking if I was being pressured not to come forward and at the time I denied it,” she said.

She also recalled an incident in which Reynolds allegedly yelled at a journalist who had written about bullying allegations in another minister’s office. Higgins said the experience made her feel angry as she had experienced bullying, and it caused her to ask herself, “how is she defending the perpetrator?”