On December 22, 1956, William Felton “Bill” Russell suited up for the first time in Boston Celtics green. Fans couldn’t anticipate the impact the then-rookie would have on the NBA, basketball giants that followed him, and the social practices that would shape how a professional athlete can make a difference. Russell, who died on July 31 at 88, was known during his basketball career as a solid scorer and a rock-solid defensive player. He will also be remembered as a change agent.

Gen Z would call Russell a walking bucket. He was among the best, winning 11 rings in 13 seasons, becoming the epitome of success on the hardwood. The highlights of his on the court prowess are plentiful, but the 1964 NBA Finals sums up his time as a competitor perfectly. Going against his eternal rival Wilt Chamberlain, Russell averaged 25.2 rebounds, 11.2 points and 5.0 assists in 5 games.

“I attended his games whenever the Celtics played the Knicks at Madison Square Garden,” wrote Kareem Adbul Jabbar, a fellow basketball star and a friend of Russell’s, for The Atlantic. “I would watch them for four to five years when they practiced at my school gym. I learned how to dominate in the paint by applying defensive pressure.”

While he was revolutionizing the center position, away from the court, he was equally dedicated to helping make life better for Black Americans. Once referred to by the American government as “Felton X,” a riff on Malcolm X’s name, Russell solidified himself as someone unafraid to speak out about prejudice.

Before Colin Kaepernick stood at the intersection of sports and social justice, Russell was vocal about inequity. In 1961, he  became the first player to ever boycott a professional game in the name of human rights, and in 1967, himself, Cleveland Browns’ Jim Brown, and more came together to support Muhammad Ali and his protest against the Vietnam war. 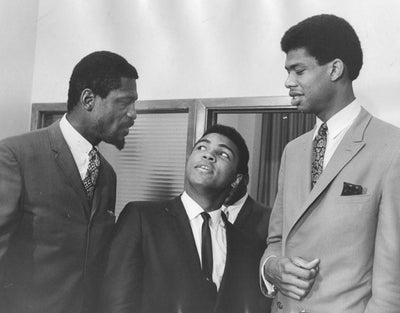 During a 1970 episode of PBS’s “Black Journal,” Russell spoke about the necessity of the Black community organizing against injustice, saying, “It’s not a matter of putting it off for ten years. It’s not a matter of delaying it because…it’s now or never.” His sense of urgency about racism was, and remains, necessary.

Additionally, when the Honors Committee voted to induct Russell into the Basketball Hall of Fame in 1975, he opted out of attending the ceremony and accepting the ring. He believed others should have received the privilege first. He specifically called back to Chuck Cooper, the first Black player to be drafted to an NBA team. Cooper was posthumously inducted in 2019 and Russell received his ring the same year. “Good to see progress,” Russell wrote on Twitter in 2019.

In 2011, former president Barack Obama awarded Russell the Presidential Medal for Freedom and summarized his legacy. “He endured insults and vandalism, but he kept on focusing on making the teammates who he loved better players, and made possible the success of so many who would follow,” he said. “I hope that one day, in the streets of Boston, children will look up at a statue built not only to Bill Russell the player, but Bill Russell the man.”

Today, we remember Bill Russell the player, and also continue learn from Bill Russell, the man. May we all keep his conviction, bravery and commitment to equality close to our hearts.