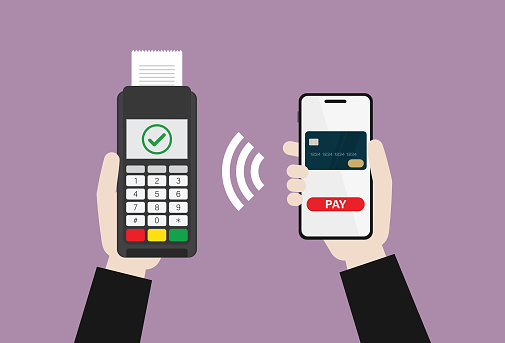 Contactless card changes are here but, says finance columnist Andy Webb, they won’t change our lives that much.

You might have spotted over the weekend that you can now tap and pay with your contactless card for more expensive purchases.

Although it sounds like it’s going to make my life more convenient, looking back at transactions in my banking apps, it is quite rare that I am actually spending in this expanded bracket.

It looks like it’ll only be paying for some meals out that will save me those extra seconds of not having to enter a PIN.

And if you have added cards to your phone via Apple Pay and Google Pay, you can already spend much, much more. The only limits in place are ones set by the retailer itself. A friend of a friend once used an iPhone to pay for a new iPhone!

So, really, this isn’t going to change our lives that much.

That is unless you’re someone who struggles to keep track of their spending. Then I think you need to be careful with contactless.

Contactless encourages us to pay quickly. Sometimes that means we don’t check the amount charged or get a receipt. There’s a risk here that you’ll get overcharged, but this nonchalant way to pay could cause havoc with your finances.

That’s because there’s no friction in your purchasing decision. You just spend and spend and spend without knowing how it impacts your bank balance or questioning whether it’s a fair price to pay.

The best way to prevent this is to use cash. Handing over coins and notes is far more tangible. You will be more aware of whether you can afford it, or whether you would rather keep the money back for something else. You can also set limits by only carrying with you the money you are able to spend. But some businesses have gone cashless since the pandemic, so you might be able to find a compromise in your banking app.

You can now set personal contactless limits with a handful of banks — and hopefully more will follow suit.

Other banks might let you turn off contactless altogether or request a non-contactless card — though I think this is overkill for most people.

If you do decide to set a limit on your contactless card, Bank of Scotland, Halifax and Lloyds offer increments of £5 between £30 and £100, while Starling Bank has increments of £10 between £10 and £100.

For more on the best bank accounts, head to becleverwithyourcash.com/banks.

Deal of the week

Curry’s has launched a new ‘Perks’ scheme that’s free to join. It’ll offer regular discounts, and one of the first is three months’ free Apple TV+, worth £14.97.

You might also be worried that the increased contactless limit will make your cards more attractive to thieves.

I’d imagine there’s a good chance of this — but it doesn’t mean scammers will sidle up to you on the train with their own card readers.

That kind of fraud just doesn’t happen. To steal your money they’ll need to have your card — so it makes sense to keep a sharper eye on your wallet when you’re out and about.

I would also turn on instant notifications on your bank apps (if available) so you see in real time if there’s unauthorised spending on your card.

But even if they do steal your money, there are limits in place.

At most you will still need to enter your PIN after five transactions or a cumulative spend of £300 — some banks might even have lower thresholds.

And you’ll get your money back, too — as long as you report it to your bank straight away.