I was in a café with a friend, and a well-dressed businessman approached. He told me he was a fan of my writing, and that he’d love to meet up some time. Later, he called me, and we chatted for half an hour. He said he was divorced with a child, and that he was headed interstate, but that he’d call when he returned.

He never called. And I may never have known why, but for a chance meeting in the city shortly afterwards. The businessman was with a female friend. Turns out, she was his long-term girlfriend.
I didn’t say anything at the time. I felt mightily pissed off, but I swallowed it down. 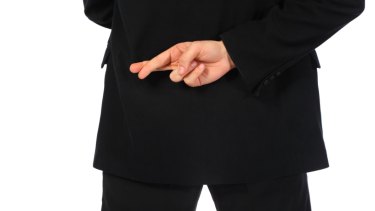 Turns out he had a serious girlfriend all along…

I’ve swallowed down all sorts of shitty behaviour from men over the years, in the dating world, and on the internet.

I’ve been ghosted. I’ve had men lie about their marital status. I’ve been pressured for sex. I’ve received grossly inappropriate messages. And I’ve had men run hot and cold, messing with my feelings, with no care at all for my wellbeing.

You know what? I put up with it all. What else could I do? There seemed to be no real point in calling it out.

And you know what? I put up with it all. What else could I do? There seemed to be no real point in calling it out. Partly, I knew it wouldn’t change the outcome. Best to just let it slide, forget the men, and move on.

I realised I wanted to tell these men off. I realised had a right to do so. And I realised that the reason I hadn’t yet done so yet had little to do with "no point", and more to do with fear.

Shortly afterwards, there was a confluence of events in my dating and online life. A man I’d been out with once suggested I come to his house, and became aggressive and offensive when I declined. A man I’d been interested in told me he didn’t want a relationship, and when I agreed to be friends, tried to hit me up for sex. A random reader tried to flirt with me in private messages, despite his profile stating clearly that he was married.

And then, months after we’d spoken, the businessman with a girlfriend started following me on Instagram and liking my posts. The chutzpah!

I called them out. I messaged each of the men and told them in no uncertain terms that their behavior wasn’t acceptable. I got angry. I was harsh. I was unlikeable. I didn’t care.

It felt good to do it. It was incredibly empowering. I didn’t have to let things slide and live with a simmering pool of resentment.

It felt good to do it. It was incredibly empowering. I didn’t have to let things slide and live with a simmering pool of resentment. I could stand up for myself and for all of us women. I was starting a revolution in my own little life.

The reactions of the men differed. One argued, a little absurdly, and then gave up. One apologized profusely. One apologized conditionally. Another immediately disappeared.

And maybe, just maybe, they’ll treat the next woman better. That is a fine outcome too.